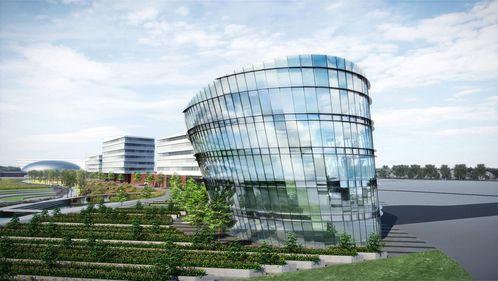 Ford has an assortment of nearly 70 disconnected buildings along Oakwood Boulevard and many of those buildings are more than 60 years old.

Ford unveiled plans to overhaul its office research and development in Dearborn over the next 10 years. Pictured here, is Ford Sustainability Showcase. Ford says it will produce more energy than it consumes. photo courtesy of Ford Land(Photo: Ford Land)

Ford unveiled sweeping plans today to redevelop dozens of buildings in Dearborn that house more than 30,000 employees in a project that will transform the automaker's presence in the city into two distinct campuses over the next 10 years.

The project, which represents an investment estimated at more than $1.2 billion, is intended to give Ford's employees the work environment and technology necessary to design and develop cars of the future.

In some ways, the massive project, in planning for more than three years, is long overdue.

In addition to its headquarters off Michigan Avenue, Ford has an assortment of nearly 70 disconnected buildings along Oakwood Boulevard, and many of those buildings are more than 60 years old. While some are only a few miles from one another, it isn't always easy to get from one building to another.

"For many of our buildings, this is the first true renovation … since they were originally built," said Ford CEO Mark Fields. "Ford World Headquarters was opened in 1956, and 60% of our buildings are more than 50 years old, so this is a very substantial investment for us."

"This is more than an investment in new buildings. It’s an investment in our employees," Fields said. "It consolidates our current fragmented footprint, and transforms it into two centralized campuses."

When it's done, the new campus will include a  circular modern building that, according to Ford, will generate more energy than it consumes. All the buildings will be equipped with the latest environmentally friendly technology, such as geothermal heating and cooling and the ability to generate renewable energy from the sun.

"When you look at our research and development center, it will have a lot of green areas that will link buildings with walking trails, bike paths, covered walkways. We will have autonomous vehicles, and on-demand shuttles and ebikes across the campus," Fields said. "It will look like a very modern, forward-thinking company that takes sustainability and the environment very seriously."

Ford declined to say how much it plans to spend on the project or if it will seek assistance from the State of Michigan.

Steve Morris, a real estate broker and managing principal of Axis Advisors in Farmington Hills, said the project easily represents a $1.2-billion investment and reflects the automaker's confidence in its growth.

"It’s a very strong statement about the commitment to community and future of the automobile industry in Michigan," Morris said.

"This illustrates a commitment to maintaining their properties and keeping Ford relevant," Woods said. Ford Land's mission "never stops. It’s always with a mind-set of, this is Ford’s home, and they will preserve and protect it."

Ford's decision to update its facilities comes a year after General Motors said it will invest $1 billion in its Warren Technical Center and add about 2,600 jobs over the next four years. GM's Tech Center project will include new design studios, a parking deck for design staff and renovation of research and development offices. Toyota is also in the process of developing a new North American headquarters in Plano, Texas, and is moving many of its employees there from Southern California.

Ford unveiled plans to overhaul its office research and development in Dearborn over the next 10 years. Campus rendering courtesy of Ford Land.

The centerpiece of the Ford product campus will be a new 700,000-square-foot design center that will include new studios and an outdoor design courtyard.

Most of the existing Ford Research and Engineering Center Campus, originally dedicated by U.S. President Dwight D. Eisenhower in 1953, will be demolished. However, a 14,000-square-foot design showroom that is part of that building will remain intact and will be upgraded to be used as an event venue.

The number of employees in the Ford’s product campus will double from 12,000 to 24,000 as the automaker consolidates its workforce into a more centralized area.

The automaker also plans to update the office space at the Ford World Headquarters building and will build a building for its lending arm, Ford Motor Credit.

Most of the renovations and construction of the new Ford Credit buildings will occur towards the end of the project.

Donna Inch, CEO of Ford Land, said the renovated office space will include a 300% increase in "collaborative work space," or conference rooms and other open meeting areas.

Collaborative, open work environments in which workers are not assigned a specific desk or share space with others has increased in 82% of companies with more than 5,000 employees since 2009, according to a 2015 survey by the International Facility Management Association.

"There is certainly a fairly significant shift occurring in how people use office spaces to achieve specific goals," IFMA spokesman Jed Link said in an interview.

Other key elements of the renovations of the headquarters campus will include:

Ford's investment announcement also comes just days after the automaker said it plans to spend $1.6 billion to build a plant to make small cars in Mexico.

Ford took a beating for several days from the UAW, Republican presidential front-runner Donald Trump and others on social media for that decision, even though most other automakers are also expanding in Mexico.

"This timing was driven by our decision over three years ago to look at our facilities," Fields said. "The work starts on Wednesday and is not in response to any news or political whims."

Ford unveiled plans to overhaul its office research and development in Dearborn over the next 10 years. Workspace rendering courtesy of Ford Land.