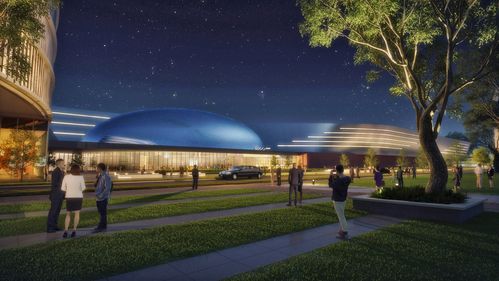 A rendering shows Ford's plans for a courtyard outside a 700,000-square-foot design center at its hometown of Dearborn, Mich.(Photo: Ford)

Borrowing a page from the Silicon Valley playbook, Ford Motor is going on a building and renovation spree near Detroit in hopes of creating more inviting and idea-inspiring work spaces.

Ford plans to renovate or build 7.5 million square feet of office space, research facilities and engineering operations, marking the first dramatic overhaul of its home base in six decades. Much of the work will be in the company's historic base of Dearborn, Mich.

Ford CEO Mark Fields said in an interview that the goal is to develop more open workspaces to encourage conversations and collaboration between different divisions — a concept well known to the tech industry that is only recently making its way through the more traditional automotive business.

"People really like being connected and not being in, let’s say, the 1970s and '80s layout where what was more appropriate then was to work in cubicle areas and have your own little personal space," Fields said. "We’re just looking at how they’re living their lives now, staying connected, and we’re saying, ‘how do we do that?’"

The sweeping real estate play — which affects 30,000 employees currently working in 70 separate buildings — is designed to give the company a fighting chance in the war for young professionals as Silicon Valley tech giants with hip corporate campuses hire away the auto industry's most talented engineers to develop autonomous vehicles and electric cars.

It also accelerates a trend among major automakers to inject a fresh dose of innovation into their once-stodgy workplace environments, where PowerPoint presentations and top-down management once prevailed over collaborative working and free-flowing communication.

Ford's corporate-campus overhaul comes as Toyota is preparing a new North American headquarters in Plano, Texas, and as General Motors continues a $1 billion renovation of its Tech Center operation in Warren, Mich.

Ford would not reveal an investment figure but said the spending is contained within its previously disclosed capital plans. Construction will begin within weeks at the research and engineering campus, while work on the headquarters campus will start in 2021. All construction is expected to finish by 2026.

The anchor of the engineering campus will be a new 700,000-square-foot design facility, Ford said.

"It’s a very strong statement about the commitment to community and future of the automobile industry in Michigan," Morris said.

Most of the square footage included in the overhaul is contained within existing buildings, said Donna Inch, CEO of Ford Motor Land Development, the automaker's real estate division. But she said the company would construct several new facilities, as well, but declined to say how many.

Many of the buildings have been only lightly upgraded since they were first built in the 1950s, Inch said.

Altogether, the plan is to locate 30,000 employees at a corporate campus and an R&D campus in Dearborn, Mich., which Henry Ford picked as the hometown for his company in the early 20th Century.

The actual headquarters building won't change much because of its iconic mid-20th Century architecture, Inch said, but it will get certain upgrades such as infrastructure improvements and new windows. Ford also plans to build a new facility for its Ford Credit operation that will be connected to the headquarters.

Fields said Ford is embracing "we space" — open, collaborative workplaces — over "me space," or cloistered offices for individuals and walls separating departments.

"It's a very big transformation," he said.

Collaborative, open work environments in which workers are not assigned a specific desk or share space with others has increased in 82% of companies with more than 5,000 employees since 2009, according to a 2015 survey by the International Facility Management Association.

"There is certainly a fairly significant shift occurring in how people use office spaces to achieve specific goals," IFMA spokesman Jed Link said in an interview. "What Silicon Valley, the Apples and the Googles are doing is making it incredibly visible. They use their workspace in part as a recruiting tool."

Asked whether Ford considered relocating employees elsewhere, Fields and Inch said the company remains committed to Dearborn as its hometown but will continue to grow operations elsewhere, including its Silicon Valley office in Palo Alto, Calif. No employees are moving out of Dearborn, they said.

The plan includes an emphasis on environmental sustainability, with an expectation that the completed campuses will use half the energy that Ford currently uses in Dearborn.

Inch said Ford would try to make every existing building qualify for Leadership in Energy and Environmental Design (LEED) Silver certification from the U.S. Green Building Council, while new buildings would pursue LEED Gold. One facility will generate zero waste, use no fossil fuels and waste no water in a clean-tech showcase.

Like other auto companies, the company will also have autonomous cars running around its campuses. Ford picked architectural firm SmithGroupJJR to handle design. Inch declined to identify contractors.