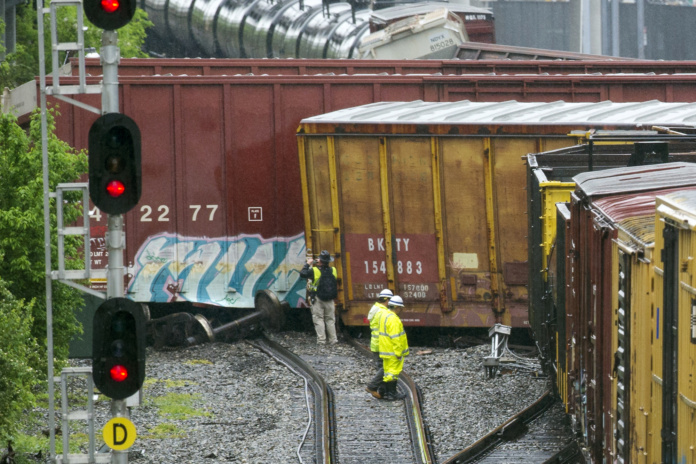 A CSX freight train derailed in Northeast Washington early Sunday, spilling hazardous chemicals along a busy rail corridor. The wreck stranded some residents away from their homes, forced the closure of a Metro station and snarled traffic as emergency personnel sought to contain the leaks and clear the wreckage.

Officials said 14 rail cars of the 175-car train left the tracks. A rail engineer and a conductor had been aboard the train but were accounted for, authorities said. No evacuations were ordered, and no one was injured.

The cause of the wreck is under investigation, and the Federal Railroad Administration was at the scene Sunday.

The derailment occurred about 6:40 a.m. as the train was passing through Washington from Cumberland, Md., en route to Hamlet, N.C., CSX said. The crash site was near Ninth Street NE and Rhode Island Avenue NE. CSX said 94 cars were carrying mixed freight and 81 were empty.

The derailment, about 70 cars into the train, spilled half the liquid contents of a 15,500- gallon tanker containing sodium hydroxide, D.C. Fire and EMS Deputy Chief John Donnelly said. The liquid spilled onto the tracks and seeped into the ground below it.

Officials said there were no air- or water-quality issues at the scene.

CSX spokeswoman Melanie Cost said the company did not have a timeline on the cleanup or restoration of the tracks.

“First let me apologize to the community for the inconvenience and the alarm that the derailment caused this morning,” she said. “Every decision that we’re making is focused on the safety of the responders and the community.”

CSX described sodium hydroxide as a chemical “used to produce various household products, including paper, soap and detergents.” It is a chemical component similar to bleach or Drano, officials said. Two other rail cars were leaking chemicals that officials described as less hazardous.

By mid-morning, D.C. Mayor Muriel E. Bowser (D) said the chemical leak was contained. But more detailed inspections revealed further leaks, according to CSX. In addition to the tank car leaking sodium hydroxide, another tank car was found to be leaking calcium chloride, described as “non-hazardous,” while a third was leaking ethanol “slowly from the base of a valve,” CSX spokeswoman Kristin Seay said.

The wreckage was visible from high-rise apartments near the crash site: A zigzag pattern of mangled tankers and overturned freight cars sat beside the tracks below the Rhode Island Avenue Metro station. A set of wheels, still intact but missing its freight car, sat upright beside the track bed. 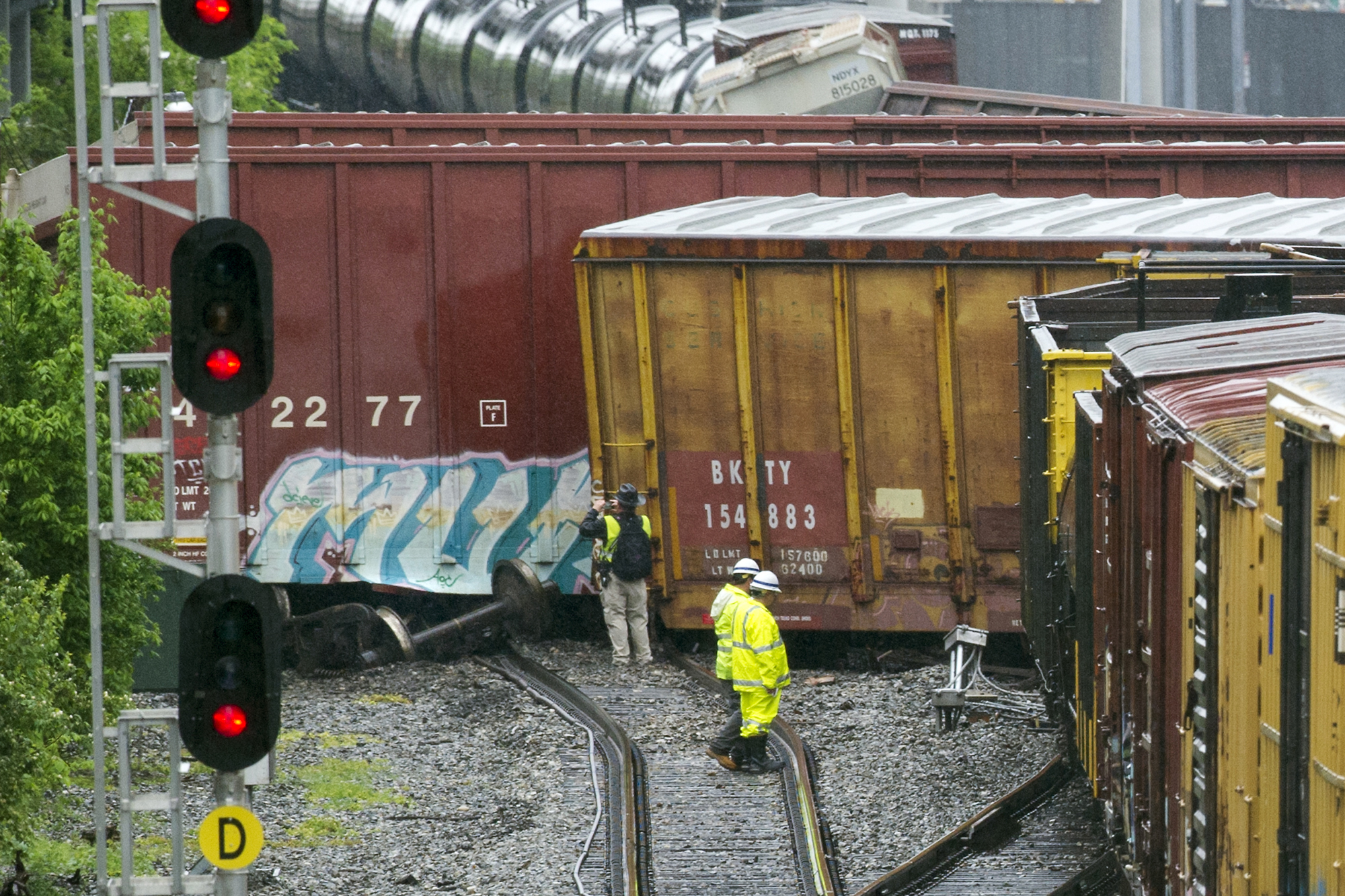 Emergency personnel work at the scene after a CSX freight train derailed in Washington on Sunday. (Cliff Owen/AP)

Weekdays, the affected tracks are shared by Amtrak, MARC and CSX trains. The tracks also run parallel to the Metropolitan Branch Trail, popular with cyclists and runners. On Sunday, the trail was closed near the site of the derailment, and officials said it would remain closed indefinitely.

Stessel said CSX was working to upright a rail car that was leaking ethanol. When the leak is mitigated, he said, the Metro tracks would be turned back over to the agency, which would run test trains and probably restore service soon thereafter.

If for any reason CSX is not able to turn over the scene, Stessel said, “that could affect service into the morning.”

MARC announced major service disruptions for its Brunswick Line on Monday because of the derailment. Its trains will run as far south as Silver Spring, where Metro will accept passengers at no charge to continue their commutes into the District. In addition, the Amtrak line from Washington to Chicago will not run Monday, but the Northeast Corridor lines will run as normal, officials said.

According to the Centers for Disease Control and Prevention, the effects of exposure to sodium hydroxide can include irritated eyes, burning skin, loss of hair and swelling of the lungs. The odorless solid is white or colorless and is usually in flakes, beads or a granular form. Sodium hydroxide is especially dangerous when mixed with water, because the toxin when wet creates heat that can ignite flammable products. It was raining heavily Sunday morning near the crash site.

Donnelly said the amount that leaked did not put District residents at risk.

“The fumes should not cause you any problems, and you should not be able to smell them anywhere else,” he said.

In recent years, Washington residents and elected officials have voiced concerns about rail safety and the risk of having freight trains pass through residential neighborhoods and the seat of the federal government.

Residents of Navy Yard, a formerly industrial neighborhood that is now densely populated, fought a CSX plan to reconstruct the 110-year-old Virginia Avenue Tunnel in Southeast, a key piece of the region’s rail infrastructure that is just a mile away from the U.S. Capitol. CSX is now in the midst of the $170 million project, which includes twin tunnels built to allow for double-stacked trains.

[As CSX starts work on Virginia Ave. tunnel, opponents ask court to stop it in its tracks]

One of the most hotly debated projects in recent years, the tunnel project revived concerns about the safety and security of the city’s railways, prompting the D.C. Council two years ago to allocate funding to conduct a comprehensive rail study that would provide an assessment of all rail service: passenger, commuter and freight.

Some residents say they fear they are at a greater risk of train derailments and that once the tunnel project is completed, CSX will increase the transportation of crude oil and other hazardous materials through the area.

CSX says it rarely transports crude oil through the District and does not carry hazardous substances such as compressed flammable gases and toxic and radioactive materials through the city.

In 2009, rainwater leaking into the Virginia Avenue Tunnel from the Southeast Freeway and Virginia Avenue weakened the earthen floor. A split rail caused the derailment of two locomotives and 13 loaded gondola cars transporting scrap metal. And in the spring of 2014, a CSX freight train derailed in downtown Lynchburg, Va., sending rail cars and burning crude spilling into the James River.

Monte Edwards, a trustee with the Committee of 100 on the Federal City, which serves as a watchdog on transportation and urban planning issues, said Sunday’s spill raised renewed concerns about the viability of shared freight and passenger tracks in the District.

Speaking for himself, he said the spill showed CSX’s disregard for rail safety and inspections in the District.

“This was a hydroxide that they spilled this time. Those are nasty things coming through,” he said, reflecting on what could have happened had the chemical spilled just a short distance south, near the Capitol.

“A spill like that [one] that just occurred here in Northeast, [if] that would occur near a grate or an entrance to a Metro station, it would flood the Metro station,” he said.

The spill underscores the need for the District to devise a comprehensive rail plan, similar to state plans required under the 2008 Passenger Rail Investment and Improvement Act, he said. The District Department of Transportation says it expects a rail plan to be completed as early as this summer.

“We have said all along that derailments are very real and these trains are carrying hazardous materials,” said Maureen Cohen Harrington, a Navy Yard resident and member of DCSafeRails, the organization fighting against CSX transporting hazardous materials through the neighborhood. “And what happened today demonstrated that, and we are well aware that this could have been far worse.”