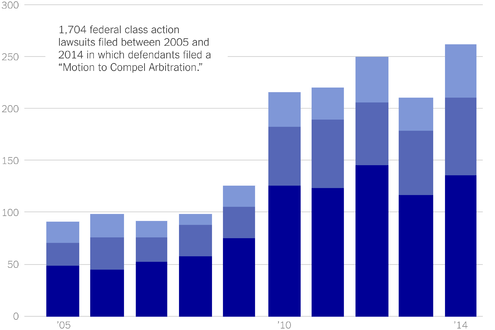 Richard Cordray, director of the Consumer Financial Protection Bureau, pointed out what a major change his agency was poised to bring about. “Many banks and financial companies avoid accountability by putting arbitration clauses in their contracts that block groups of their customers from suing them,” he said in a statement.

The rule would apply only to the consumer financial companies that the agency regulates. It would not apply to arbitration clauses tucked into contracts for cellphone service, car rentals, nursing homes or employment.

“It is a good start,” said Berle M. Schiller, a federal judge in Philadelphia who has been critical of arbitration clauses that dismantle class actions and tip the scales in favor of companies. “Class actions are the only way that companies can be brought to heel.”

The agency’s proposed rule would be the first significant check on arbitration since a pair of Supreme Court decisions in 2011 and 2013 blessed its widespread use. Those decisions signaled the culmination of an effort by a coalition of credit card companies to stop the tide of class-action lawsuits.

As arbitration spread, it drew the ire of prosecutors, judges and officials like Senator Elizabeth Warren, Democrat of Massachusetts, who championed the creation of the consumer protection bureau. The Dodd-Frank law, which overhauled Wall Street and created the bureau, specifically charged the agency with the task of studying arbitration.

Last March, the agency released a 728-page report detailing how few consumers followed through with arbitration once their class actions were blocked.

Removing the Ability to Sue

A New York Times study of the increasing use of arbitration clauses in contracts, which has effectively forced millions of people to sign away their right to go to court.

For the few who did go through with the process, the report also showed the lopsided nature of the rulings. Businesses won bigger judgments against consumers in arbitration — a total of $2.8 million in 2010 and 2011, largely for debt payments — than the consumers obtained in relief, according to the agency’s analysis.

During that period, only 78 arbitration claims resulted in judgments in favor of consumers, who received less than $400,000 in total relief.

The financial industry disputed the findings, arguing that on an individual basis, consumers fare better in arbitration than in class actions. On average, awards in arbitration are 166 times as great as the sums received by individuals participating in a class action, according to the industry’s analysis.

But judges and law professors say that class actions, by their very nature, are meant to help large groups of people recoup small amounts of money — a $35 overdraft fee or a mysterious $5 late fee, for example.

And more broadly, class actions can force companies to change their business practices.

Banks — not all of which use mandatory arbitration clauses — may understand that concept better than most. Banks had to pay more than $1 billion to settle class-action lawsuits, beginning in 2009, that accused them of manipulating their checking account policies to maximize the number of overdraft fees.

Since then, seven of the banks involved in the class actions have adopted mandatory arbitration clauses.

The new rules giving borrowers access to class actions are likely to draw vigorous opposition from the U.S. Chamber of Commerce and other business groups, though they may not be able to do much about them. Their position has been that the consumer agency’s study does not support its conclusions about mandatory arbitration.

“The proposed rule is a wolf in sheep’s clothing,” the U.S. Chamber of Commerce said in a statement. “Now the agency designed to protect consumers is proposing a rule that will end up hurting them.”