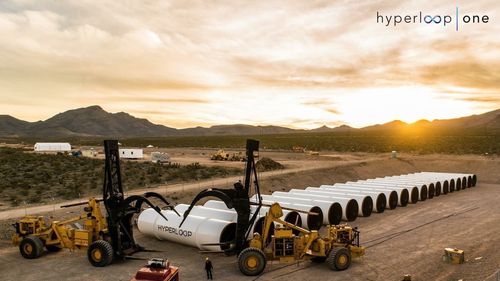 Hyperloop One, a Los Angeles-based company, is showcasing a demo of its high-speed, transportation technology at its test facility outside of Las Vegas.(Photo: Hyperloop One)

LAS VEGAS - One of the companies looking to make 750-mile-an-hour transportation a reality has just greatly accelerated the pace of its effort.

Hyperloop One, formerly known as Hyperloop Technologies, announced Tuesday that it not only changed its name but also secured an $80 million Series B investment round as well as a raft of global partners eager to explore the possibility of creating a tube-based system of shuttling people and goods between cities in capsules that float thanks to magnetic levitation science.

Both the capital and partnerships announced by Hyperloop One seem to take the futuristic tech one step closer to reality, fueled in part by a need for solutions to growing infrastructure and environmental challenges.

That said, the hurdles include ensuring that such a transportation network was safe and reliable, as well as overcoming the construction headaches involved in creating hundreds of miles of tunnels or above-ground tubes.

"We are living in a window of time that is absolutely historic, the test you'll see tomorrow was just an idea three years ago," says Shervin Pishevar, managing director at Sherpa Ventures, an early Uber investor and cofounder of Hyperloop One along with Broan BamBrogan. The company's CEO is Rob Lloyd, a longtime Cisco Systems executive.

"To me, it's a moment for us to take pause and think about," says Pishevar. "Technology is moving faster than in any other time in human history. Almost impossible moonshot ideas are being executed with incredible speed, and it's private companies and not nations that are making them a reality."

Although based in Los Angeles, which is a growing hotbed of hyperloop engineering, Hyperloop One officials made the news in this desert town because they plan to demonstrate the propulsion part of their tech to investors and media on Wednesday.

The company has its test and safety facility in north Las Vegas, where some of Hyperloop One's 150 employees work on the tubes and shuttle pods that are integral to its tech. Hyperloop is aimed at being a faster alternative to automotive, train and even air travel.

At nearly the speed of sound, the 350 miles between San Francisco and Los Angeles could be covered in about 30 minutes by a capsule racing through a tube between the two cities.

BamBrogan said his company is hoping to conduct a full-scale test by the fourth quarter of the year.

Some of the more intriguing aspects of Hyperloop One's news involves the involvement of various companies focused on moving cargo, not people. In this sense, a mature and profit-generating hyperloop business is one that replaces 20th-century goods-shipping technologies such as trains and trucks. 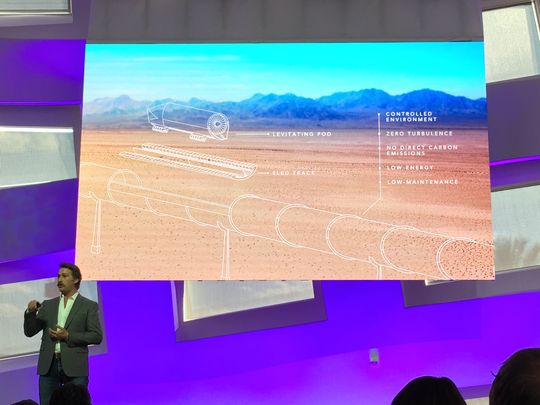 Brogan BamBrogan, one of the cofounders of Hyperloop One, explains some of the company's tech plans in the desert outside of Las Vegas. (Photo: Marco della Cava, USA TODAY)

Hyperloop One is working on a feasibility study with Arcturan Sustainable Cargo of Los Angeles to determine how its system could move shipping containers from the ports of Long Beach and L.A. to their destinations while reducing area congestion and pollution.

"We're going to build out a suite of solutions, hyperloops for palletized freight, containerized freight," says BamBrogan, formerly an engineer at Elon Musk's rocket-focused company, SpaceX. "What if you took a whole port and moved it off shore, off-load ships out there and hyperloop all of it inland and then open up the shore for what it's supposed to be, which is enjoyed by human beings,"

For passengers, he adds, "it'll be an elevator experience. It'll have the speed of an airplane but city center to city center with no turbulence or weather delays."

Hyperloop One also is partnering with Cargo Sous Terrain of Switzerland to investigate how a hyperloop tube track could conceivably be used to created a fully tunneled cargo transport system beneath that European country.

Another new partner is FS Links Ab, a company based in the Aland Islands in Finland to develop technical, commercial and policy cases for a hyperloop link between Stockholm and Helsinki.

Other players in these growing hyperloop tech sweepstakes include Hyperloop Transportation Technologies, a crowdsourced effort that has raised money and received technical input from engineers working for enterprises ranging from Boeing to NASA.

skyTran, based south of San Francisco, has a partnership with NASA and $30 million in funding. But it is focusing on building a magnetic levitation, or maglev, solution for urban traffic, with small two-person pods zipping through cities at up to 150 mph on a monorail.

Tesla CEO Musk first popularized the notion of a commercially viable hyperloop in 2013. But while SpaceX is sponsoring a student competition unfolding later this year aimed at coming up with innovative solutions to hyperloop tech problems, it will not be developing a commercial hyperloop business.

"To support this competition, SpaceX will construct a one-mile test track adjacent to our Hawthorne (Calif.) headquarters," says SpaceX spokesman Phil Larson. "Teams will be able to test their human-scale pods during a competition weekend at the track, currently targeted for Summer 2016. The knowledge gained here will continue to be open-sourced."

Pishevar told the story of flying to Cuba with Musk some years ago, during which Musk said he was "a little busy trying to get to Mars and building Teslas, so he told me to go for it."

But, he added, "to make this a reality we need a movement." To that end, the company also announced the Hyperloop One Challenge, which will solicit ideas for working around issues that might stymie hyperloop. The deadline for ideas is September 15, and winners will be announced in March of 2017. Winning ideas will be incorporated into the first rollout of hyperloop.