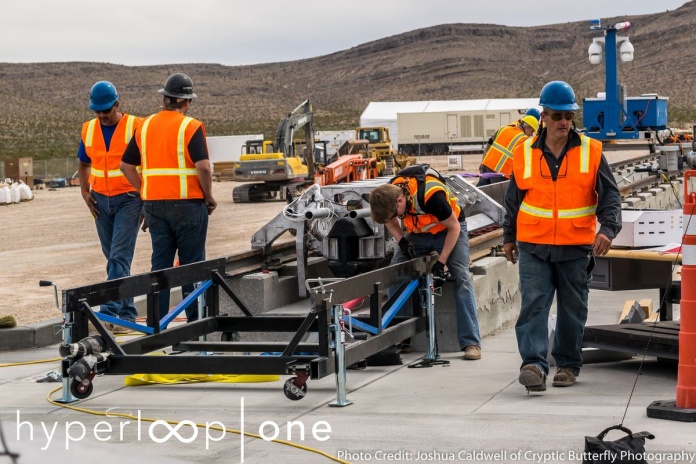 Elon Musk’s dream of transforming yet another form of transportation is inching (or racing, if things go well) toward reality.

In 2014, Musk, of Tesla fame, outlined a potentially revolutionary transportation system called the Hyperloop, an above-ground, low-pressure tube with smallish pods inside that are propelled by impeller engines and supported by either air or magnets. Musk came up with the idea and published a 76-page white paper, but he open-sourced it, allowing others to turn it into a reality.

On Tuesday, one company working on the project announced it’s ready to run its first public open air test of the solar-powered transportation project's propulsion system. The Hyperloop is expected to travel at speeds of up to 760 mph and is planned to be, unlike much of modern day public transportation, weatherproof.

With the test set for Wednesday morning, though, the more interesting news may be that the company has changed its name from Hyperloop Technologies to Hyperloop One.

The company says they're changing their name now to coincide with the open-air test in Northern Las Vegas, Nevada. However, it's fair to assume that it's also an attempt to clear up some market confusion.

You see, there are two companies — Hyperloop One (formerly Hyperloop Technologies) and HTT (which stands for Hyperloop Transportation Technologies) — competing to be the first to get Musk's brainchild up and running. Putting “One” in the name is a clear attempt to tell people that there is just one Hyperloop that matters. While Musk came up with the idea, he hasn't put any money into either project.

It’s also a smart move as the news of the test, if successful — and if not — will travel fast tomorrow and the last thing Hyperloop One wants, is market confusion surrounding its big moment. 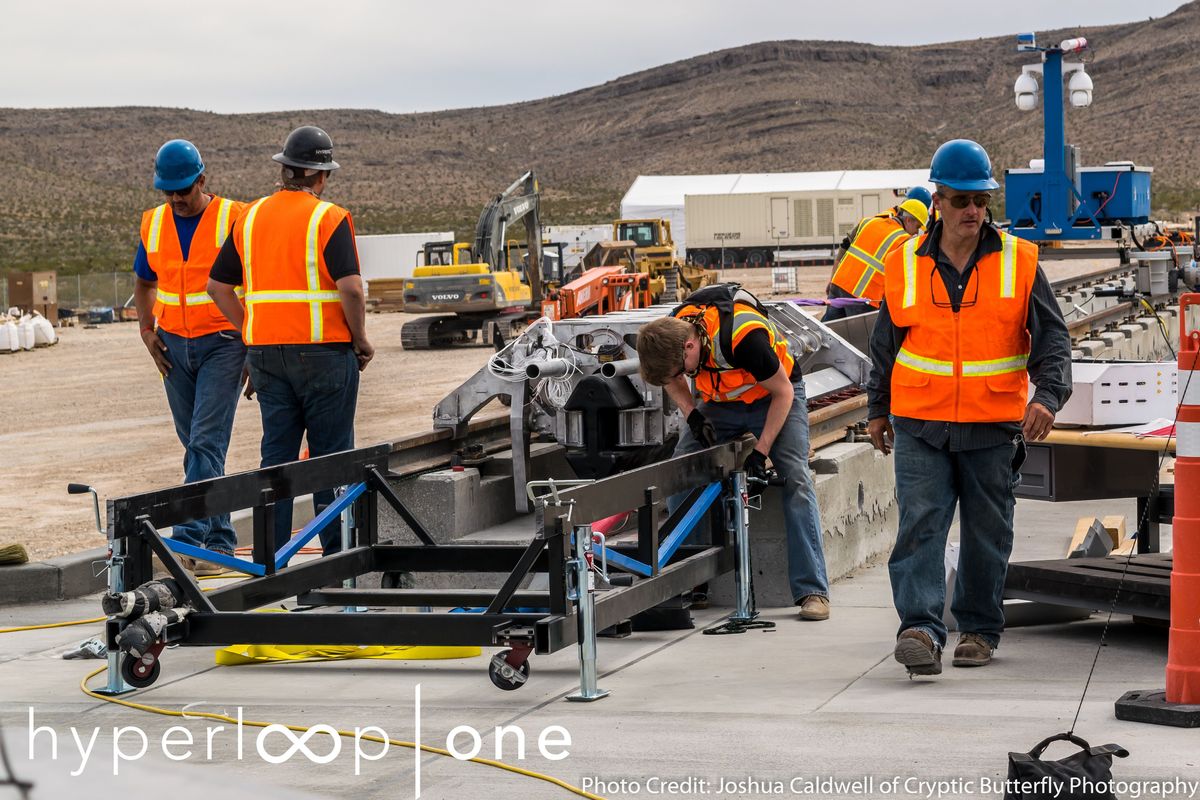 Hyperloop One also announced a fresh injection of cash: $80 million Series B funding, and the company trumpeted more than half a dozen new partners (and potential customers) across a wide range of disciplines, including architecture, engineering, finance, freight and naturally, tunneling.

“We will work alongside these world-class partners to redefine the future of transportation, providing a more immediate, safe, efficient and sustainable high-speed backbone for the movement of people and things,” said Rob Lloyd, CEO of Hyperloop One in a release.

Partnerships and money are great for the viability of what is essentially a transportation startup, but all eyes will be locked on North Las Vegas tomorrow morning in this first-ever, public Hyperloop technology test.

What we’ll see is not a full-scale Hyperloop system. Hyperloop One actually has a number of technologies it has to perfect: levitation, a low-pressure tube environment and propulsion. This test will only address the latter and it will not include pods or pylons to support a future Hyperloop One system. It won’t even be solar-powered.

“All current tests are tied to electric grid,” Hyperloop One SVP of Engineering Josh Giegel told me after Tuesday’s press conference. Though they will be able to switch to solar later on, if they choose.

Giegel, who was literally Hyperloop One employee No. 1, explained that Wednesday’s test will address the systems’ linear electric motor-based propulsion system. Unlike typical motors, this one has no moving parts. Giegel described the motors as “blades” and what you might get if you took a typical electric motor, cut it down the seam and unrolled it. When powered, these roughly 2-feet tall by 6-inch wide blades create electromagnetic energy that reacts with the pod and pushes it along. 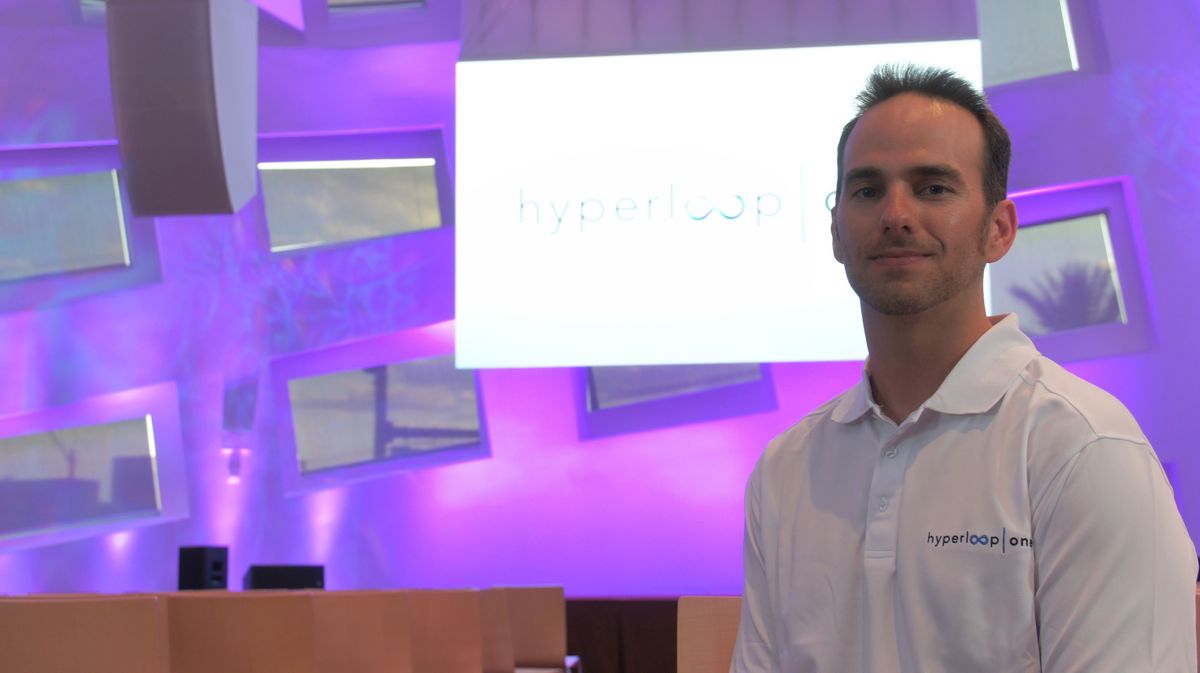 There are other transportation systems that use similar propulsive technology, but Hyperloop One’s linear motors will not run the length of a Hyperloop track.

“It only needs it on about 5% to 10% of the track,” said Giegel who explained that in a low pressure tube where the pods are levitated via permanent magnets, there’s very low drag. These motors will only need to be placed every 40 to 50 miles.

“High speed rail needs it entire length because they’re outside and have a lot of drag,” Giegel told me.

For Wednesday’s test, they’ll send the pod – or whatever is in place of an actual pod – from 0 to 60 mph in 1 second, generating up to 2 Gs of force.

It’s a test, Giegel said they’ve run repeatedly in the labs. “We’ve repeated and been rehearsing.”

“If this works the way we predicted it does, then we take this design and move it inside the tube later this year,” said Giegel.

There's still no timeline for full production since so much depends on partners, customers and target routes. Overall, Giegel expects Hyperloop One to be opportunistic in choosing whether to first start transporting people or freight.

“It has worked in the past and it will work again in the future. If it’s not tomorrow, then it will be after that,” Giegel told me.