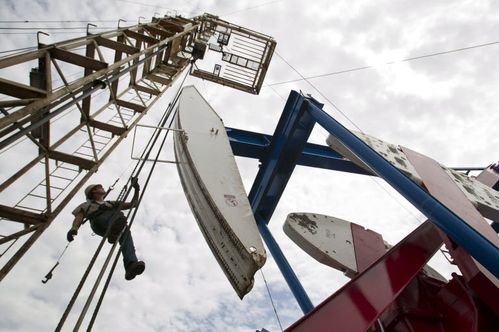 Ben Shaw hangs from an oil derrick outside of Williston, N.D.(Photo: Gregory Bull/AP)

There could be a growing shortage of skilled workers in the oil industry.

That may seem counterintuitive in an industry that has been rapidly shedding workers, with more than 350,000 people laid off in the oil and gas industry worldwide.

Texas is one place feeling the pain. Around 99,000 direct and indirect jobs in the Lone Star state have been eliminated since prices collapsed two years ago, or about one third of the entire industry. In April alone there were about 6,300 people in oil and gas and supporting services that were handed pink slips. Employment in Texas’ oil sector is close to levels not seen since the aftermath of the financial crisis in 2009. "We're still losing big chunks of jobs with each passing month," Karr Ingham, an Amarillo-based economist, told The Houston Chronicle.

But the damage to the oil industry’s workforce could be exactly why companies could face a skills shortage in the months and years ahead.

North Dakota had nearly 1,000 drilled but uncompleted wells as of March, and more companies are showing some signs that they might step up completions now that oil prices are above $50 per barrel. But they might find it difficult to ramp up the rate of completions if they cannot field enough workers. There are only about eight fracking crews left in the state, down from 45 two years ago, according to Reuters. Fracking crews are brought in to frack and complete wells for oil producers.

A recent survey of oil companies in the Bakken revealed concerns from the industry about the dismantling of fracking crews. “Even if prices went to $100 per barrel of oil, you don’t have any frack crews available to complete all the wells that need fracking,” one survey respondent told Hart Energy Market Intelligence.

One oil worker recently interviewed by Reuters illustrates the problem for places like the Bakken. John Ritchart, a worker that was responsible for heating water for a fracking crew, packed up and left North Dakota, moving back to Washington State after his pay was cut by 30 percent. “I can feed two people at home for a month for what it costs me to eat in Williston for a week,” Ritchart told Reuters. “I can’t afford to stay here.” The city of Williston, located in the heart of the Bakken, saw its population shrink by 16 percent since the summer of 2015.

At a recent industry conference in North Dakota, a top executive at Hess Corp. said that dismantling crews can be counterproductive. “If you just stop your entire operation, you send all your contractors home, you lose all your completion supervisors and you end up in a situation where you have to start all over again,” Gerbert Schoonman, Hess vice president in the Bakken, said at the Williston Basin Petroleum Conference in May.

But the thousands of laid off engineers, technicians, geologists, and rig workers won’t sit around waiting for oil prices to rebound. Many are moving on to find work in other states and in other industries. In Texas, some laid off oil workers are increasingly finding work in the solar industry, which may not pay as much as working in the oil fields, but does offer more stability. One solar company in San Antonio told Marketplace that about a quarter of the resumes they receive come from workers who lost jobs in the oil and gas industry. The problem for solar companies is finding workers that are truly leaving oil and gas and not just waiting for a rebound.

As thousands of out-of-work oil and gas veterans find other jobs, there could be a shortage of skilled workers if drilling picks back up.

“There is going to be within the next, I think, six months to a year a real competitive war for the best and the brightest in this industry,” Les Csorba, a partner at the Houston office of Heidrick & Struggles, said in an interview with Houston Public Media. “You are seeing the baby boomer generation retiring, so you have an aging population within the energy sector…you are seeing an increased demand for technical competence and expertise.”

But the damage from two years of low oil prices is also doing its part. “Obviously we are going to see a number of defections from the energy industry. Young people that came into the business are now leaving because they are afraid of the cyclical nature of the industry,” Csorba said.