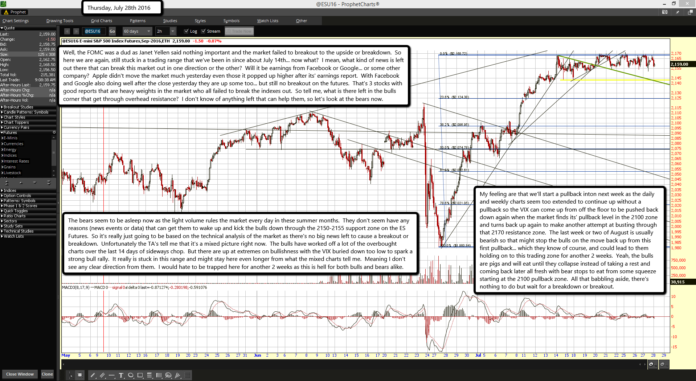 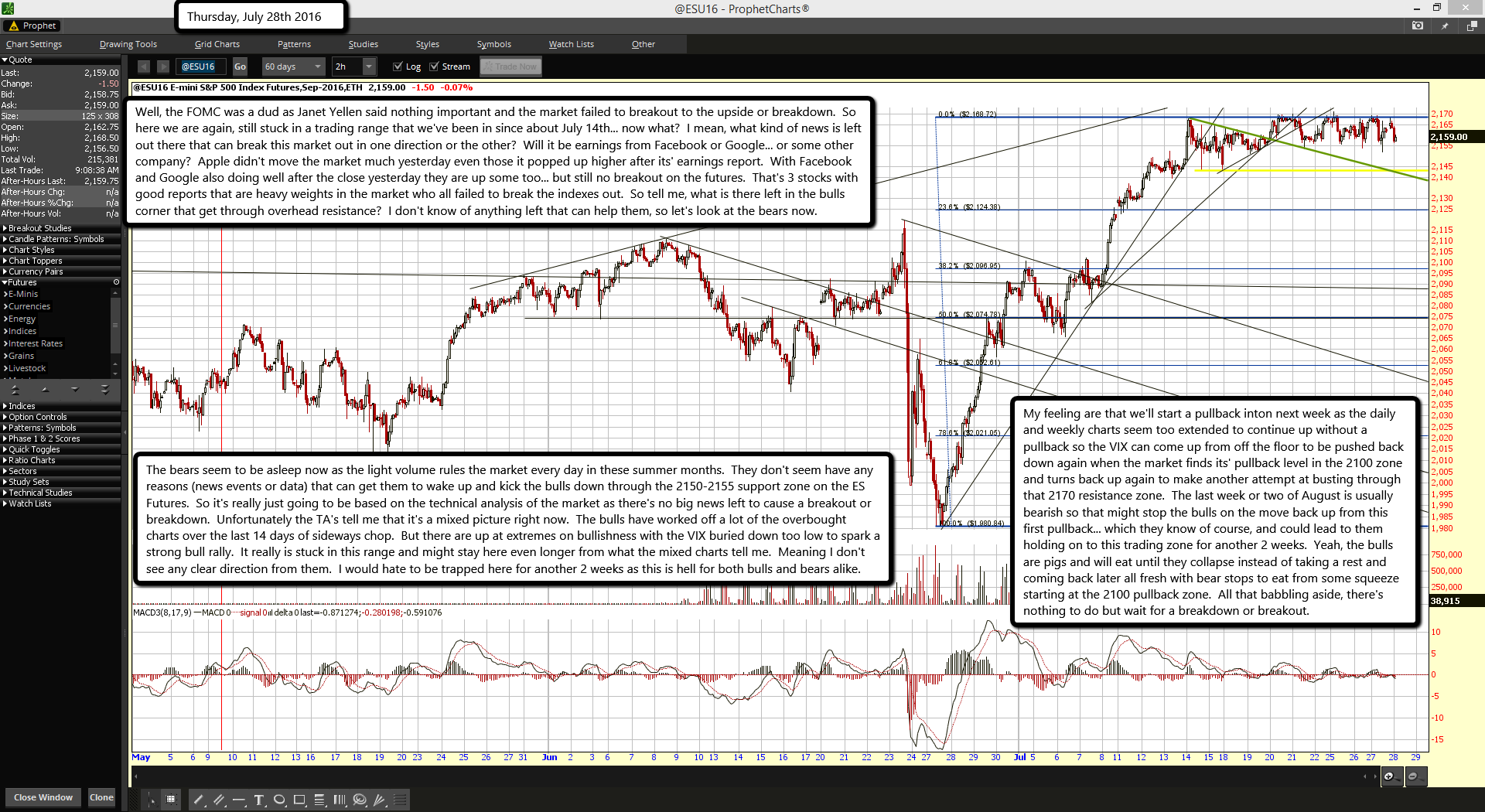 Well, the FOMC was a dud as Janet Yellen said nothing important and the market failed to breakout to the upside or breakdown.  So here we are again, still stuck in a trading range that we've been in since about July 14th... now what?  I mean, what kind of news is left out there that can break this market out in one direction or the other?  Will it be earnings from Facebook or Google... or some other company?  Apple didn't move the market much yesterday even those it popped up higher after its' earnings report.  With Facebook and Google also doing well after the close yesterday they are up some too... but still no breakout on the futures.  That's 3 stocks with good reports that are heavy weights in the market who all failed to break the indexes out.  So tell me, what is there left in the bulls corner that get through overhead resistance?  I don't know of anything left that can help them, so let's look at the bears now.

The bears seem to be asleep now as the light volume rules the market every day in these summer months.  They don't seem have any reasons (news events or data) that can get them to wake up and kick the bulls down through the 2150-2155 support zone on the ES Futures.  So it's really just going to be based on the technical analysis of the market as there's no big news left to cause a breakout or breakdown.  Unfortunately the TA's tell me that it's a mixed picture right now.  The bulls have worked off a lot of the overbought charts over the last 14 days of sideways chop.  But there are up at extremes on bullishness with the VIX buried down too low to spark a strong bull rally.  It really is stuck in this range and might stay here even longer from what the mixed charts tell me.  Meaning I don't see any clear direction from them.  I would hate to be trapped here for another 2 weeks as this is hell for both bulls and bears alike.

My feeling are that we'll start a pullback inton next week as the daily and weekly charts seem too extended to continue up without a pullback so the VIX can come up from off the floor to be pushed back down again when the market finds its' pullback level in the 2100 zone and turns back up again to make another attempt at busting through that 2170 resistance zone.  The last week or two of August is usually bearish so that might stop the bulls on the move back up from this first pullback... which they know of course, and could lead to them holding on to this trading zone for another 2 weeks.  Yeah, the bulls are pigs and will eat until they collapse instead of taking a rest and coming back later all fresh with bear stops to eat from some squeeze starting at the 2100 pullback zone.  All that babbling aside, there's nothing to do but wait for a breakdown or breakout.