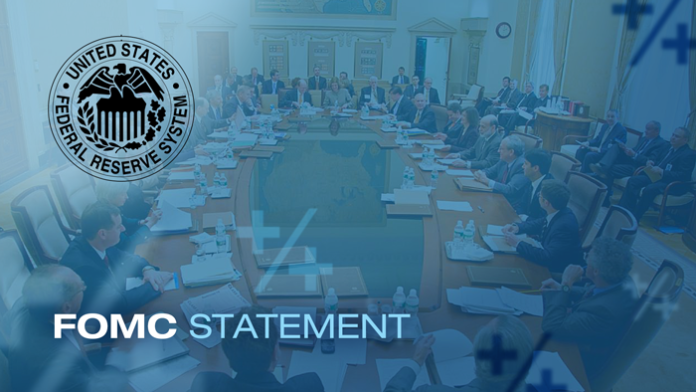 The Federal Reserve left interest rates unchanged while saying risks to the U.S. economy have subsided and the labor market is getting tighter, suggesting conditions are getting more favorable for an increase in borrowing costs.

“Near-term risks to the economic outlook have diminished,” the Federal Open Market Committee said in its statement Wednesday after a two-day meeting in Washington, before repeating language from June that the panel “continues to closely monitor” inflation and global developments. Job gains were “strong” in June and indicators “point to some increase in labor utilization in recent months,” the Fed said.

U.S. central bankers are taking stock of the economy’s progress in the wake of the U.K.’s vote last month to leave the European Union, as well as the large swing from May’s soft labor report to June’s rebound. While Chair Janet Yellen has repeatedly stated that the Fed is likely to raise interest rates gradually, market volatility and the unexpected dip in job gains have delayed such plans.

"It’s kind of an upbeat statement, although guarded," said Roberto Perli, partner at Cornerstone Macro LLC in Washington and former associate director for monetary affairs at the Fed Board. “It’s a sign of a little bit of confidence, if you want, in the outlook going forward."

The committee repeated that it expects “economic conditions will evolve in a manner that will warrant only gradual increases in the federal funds rate.” There was no reference to the specific timing of the next potential rate hike.
Labor Market

Data since the Fed’s June meeting indicate “that the labor market strengthened and that economic activity has been expanding at a moderate rate,” the Fed said. The statement contained three references to recent improvement in the labor market.

The central bank left the target range for the benchmark federal funds rate at 0.25 percent to 0.5 percent, where it’s been since a quarter-point increase in December that ended seven years of near-zero rates.

Household spending “has been growing strongly,” while business investment “has been soft,” the FOMC said. The Fed reiterated that it expects inflation to rise to its 2 percent target over the medium term.
Yellen’s Stewardship

Yellen is defining her term at the central bank with a cautious policy aimed at steering the economy through domestic headwinds such as tight credit and low productivity gains as well as global shocks. The unexpectedly long pause in interest-rate increases has suggested she’s waiting for overwhelming evidence of a strong economy and for international risks to subside.

“You have to view September as a very real possibility for a rate hike, but it’s not our base case,” said Luke Tilley, chief economist at asset manager Wilmington Trust Corp. “If the data comes in fairly strongly ahead of September, they’ve positioned themselves to do something.”

The statement contrasted June’s jobs report with “weak growth in May.” Non-farm payrolls rose by 287,000 jobs in June, dispelling some concern that hiring had slowed, after May’s gain of 11,000. Recent reports on retail sales, housing starts, capacity utilization, and service industries have all beat economists’ expectations.

Yellen wasn’t scheduled to hold a press conference after this week’s meeting. Fed officials next meet Sept. 20-21, and will publish new forecasts and rate projections at the conclusion of that gathering.
George Dissents

Esther George, president of the Kansas City Fed, dissented, reinstating her preference for a quarter-point increase after supporting the decision in June to leave rates unchanged.

All but two of 94 analysts surveyed by Bloomberg News expected the Fed to leave interest rates unchanged at the meeting. Federal funds futures ahead of Wednesday’s statement suggested that traders see close to a 50-50 chance of a rate hike at or before the FOMC’s final meeting this year, in December.

Yellen will speak at the Kansas City Fed’s Jackson Hole, Wyoming, symposium on Aug. 26. That will provide her with an opportunity to discuss the committee’s sense of the economy’s progress.

"The market is going to pay a lot of attention to that speech,” Perli said.