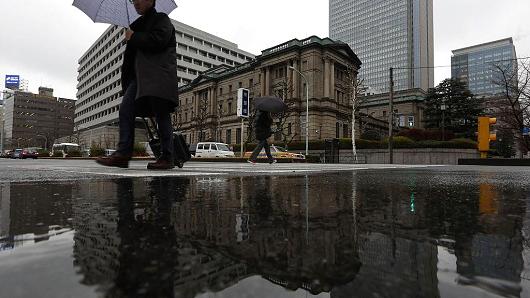 Japan shares whipsawed and the yen surged after the Bank of Japan threw markets a smaller-than-expected bone in a keenly watched decision on Friday.

While the BOJ eased its monetary policy further by increasing its purchases of exchange-traded funds (ETFs), it didn't change interest rates or increase the monetary base, as analysts had widely expected.

The central bank said it would increase its ETF purchases so that their amount outstanding on its balance sheet would rise at an annual pace of 6 trillion yen ($56.7 billion), from 3.3 trillion yen previously.

"The message the BOJ is sending is not so much much 'whatever it takes' as 'monetary policy's pretty much played out'," said Kit Juckes, global fixed income strategist at Societe Generale.

The benchmark Nikkei 225 whipsawed after the decision, tumbling as much as 1.66 percent immediately after the announcement. It quickly retraced the fall, but then spent the remainder of the session volleying between gains and losses. At market close, the Nikkei finished up 92.43 points, or 0.56 percent, at 16,569.27.

In the bond market, Japanese government bonds (JGBs) sold off. The yield on the benchmark 10-year JGB jumped to negative 0.169, from an earlier low of negative 0.276. Yields move inversely to bond prices. Many analysts had expected the BOJ would increase its JGB purchases.

Sean Darby, chief global equity strategist at Jefferies, said in a note that the news on the ETF purchases "should boost sentiment on stocks," but "overall monetary policy will only be marginally changed given that the BOJ's balance sheet expansion has already decelerated."

"The absence of any change on deposit rates will have disappointed those investors seeking a bolder move by the BOJ," said Darby.

In Japan, on the fiscal front, Japanese media agency Jiji reported earlier this week that Prime Minister Shinzo Abe was preparing a stimulus package worth 28 trillion yen ($265.30 billion), which exceeded the top-end of initial estimates of around 20 trillion yen.

That made the BOJ's relatively tame moves even more surprising as analysts had said the fiscal stimulus details may have been leaked to pressure the central bank. Additionally, data showing prices fell was released before the market open, which analysts had expected would also put pressure on the central bank to ease further to try to reach its 2 percent inflation target.

July price figures for Tokyo, which are available a month in advance of the nationwide data, also fell. Core CPI for Tokyo was down 0.4 percent on-year.

Japan's household spending fell 2.2 percent on-year in June, a relatively steep decline compared with a Reuters poll that had predicted a 0.3 percent drop. The country's seasonally adjusted unemployment rate for June was at 3.1 percent, a 0.1 percent drop from the previous month.

Prior to the BOJ announcement, Reuters reported trading in the Japanese government bond futures was halted earlier for 20 minutes due to a likely system glitch. Reuters said the Japan Exchange Group was still looking into potential reasons. Trading was resumed at 0113 GMT, reported Reuters.

Tomohiro Ohsumi | Bloomberg | Getty Images
Pedestrians holding umbrellas while walking past the Bank of Japan (BOJ) headquarters are reflected in a puddle in Tokyo, Japan. Markets expect the Japanese central bank to introduce further stimulus measures on Friday, July 29, 2016, in a bid to prop up Japan's flagging economy.

In company news, shares of Nomura closed up 12.54 percent, after Reuters reported the bank was planning a 45 billion yen buyback of up to 2.6 percent of its shares. In its earnings numbers, Nomura said its April-June net profit dropped to 46.83 billion yen, from 68.7 billion yen a year earlier, said Reuters.

Shares of Singapore's DBS Group fell 2.90 percent following reports that the bank expected to recover about 50 percent of its $519 million exposure to the collapse of a big Singapore oilfield services firm, Swiber.

Reuters said Swiber Holdings became the biggest Singapore business so far to fall victim to the oil price slump in the past year, after the company said on Thursday it had filed for liquidation.

On the earnings front, Japanese electronics maker Sony released earnings for the three months ended June 30, 2016 after market close. Operating profit dropped 42 percent to 56.2 billion yen ($542.7 million) on-year. Sony said the drop was due to deterioration in the semiconductors segment, which was partially offset by the mobile communications and games & network services businesses.

Sony added it booked a net charges of 13.6 billion yen in expenses in the semiconductors business, resulting from the 2016 Kumamoto Earthquakes.

In South Korea, industrial output in June fell 0.2 percent on a seasonally adjusted basis on-month, compared with a Reuters poll that expected an uptick of 0.2 percent. Reuters reported that on an annual basis, industrial output rose 0.8 percent in June, after a revised 4.7 percent gain in May.