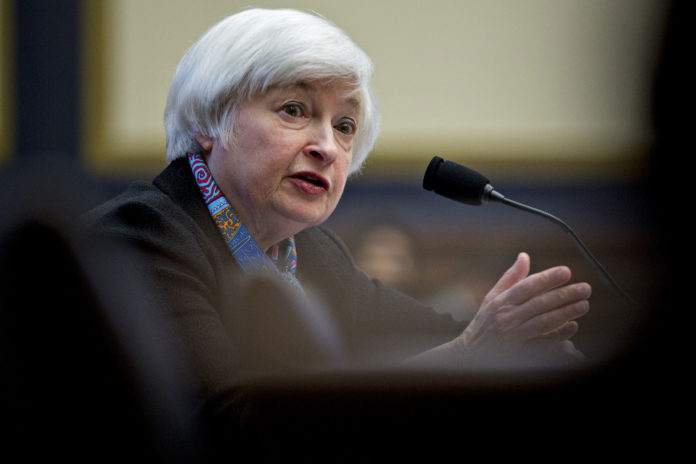 A pair of better than expected non-farm payrolls reports affirms that the U.S. economy doesn't have a new problem, that is, a rapid slowdown in job growth  just the same old one: sluggish productivity.

And monetary policymakers will be aiming to ensure that this blight on the U.S. economy disappears as labor slack continues to diminish, according to a Deutsche Bank AG team led by Dominic Konstam. That's because continued low productivity growth likely entails that businesses aren't boosting capital spending to increase output at a time when another input to the production process  labor  is becoming more scarce and more expensive.

One "implication of stubbornly low productivity is that it is critically important for the Fed[eral Reserve] to protect aggregate demand, particularly as the pace of payroll expansion slows with full employment looming," he writes.

Heading into the second quarter of 2016, quarter-on-quarter productivity growth, a measure of the change in output per hour worked, has averaged just 0.7 percent over the past four readings, well shy of its long-run average of 2.2 percent. 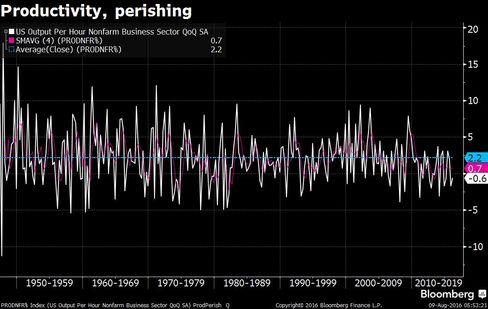 Increases in economic output can only be garnered by boosting the number of aggregate hours worked or by producing more goods and services per hour worked.

The greying of the U.S. population is poised to put the brakes on the rate of growth of labor input as boomers exit the work force. As such, in the absence of productivity growth, the economy might not see much growth at all.

But the Fed is cognizant of the need to have a clean hand-off between a labor market that's running out of slack and capital deepening to help boost productivity, according to Konstam.

"The logic is quite simple: the corporate sector is unlikely to increase investment in the absence of strong (global) final demand, and investment has historically been a requisite for rising productivity," the strategist writes. "The thorny fact is that employees are also consumers, so too much slowing in employment growth could easily depress demand."

A need to spur productivity growth helps explain the Fed's focus on the state of financial conditions, as the level of interest rates, credit spreads, the U.S. dollar, and stock prices, will presumably influence corporate investment decisions  and suggests that the central bank's concerns over these variables won't abate any time soon.

"As long as the labor market is healthy, the Fed could raise rates modestly, but must take care not to create headwinds for aggregate demand that could impede a transition to productivity driven growth," cautions Konstam. "Any new headwinds created by Fed tightening would likely reinforce the existing (downward) trend in real private investment."

The manifold headwinds on productivity growth (a mass retirement of the most experienced workers, a prolonged period of rising oil prices before a sharp retreat, the slow integration of new innovative technologies into the production process, and above all, soft business investment) means policy rates will stay even lower throughout this cycle than the subdued levels monetary policymakers think they'll eventually reach over the long haul, according to Bank of America Merrill Lynch analysts.

"Along with a drop in potential [growth] comes a decline in the equilibrium interest rate. In real terms assuming 2 percent target inflation the Fed has penciled in a long-term real R* of 1 percent with the short-run hovering close to zero," writes BofA's Michelle Meyer, with R* referring to the long-run level of the federal funds rate at which the Fed believes monetary policy would neither be stimulative nor contractionary. "Given the nature of this cycle, we are unlikely to actually reach this estimate of long-run R*."

A pick-up in capital spending by businesses will presumably foster a commensurate rise in productivity, which would allow even companies without a large deal of pricing power to avoid choosing between pressuring their profit margins or raising costs for their customers.

Otherwise, as the Deutsche Bank team writes, "this could well be a cycle that does indeed die of old age," with Corporate America electing to cut jobs to maintain profitability and ultimately fostering a downturn in consumer spending.