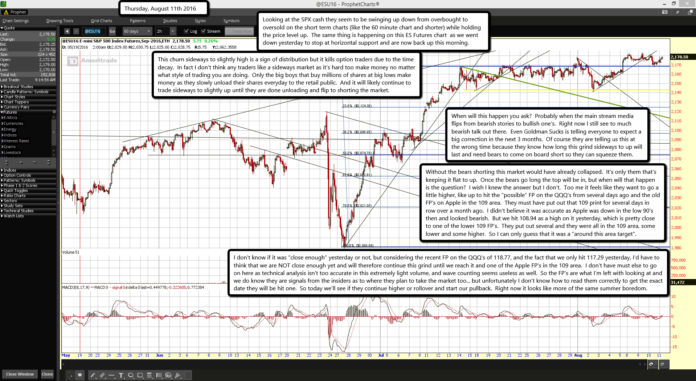 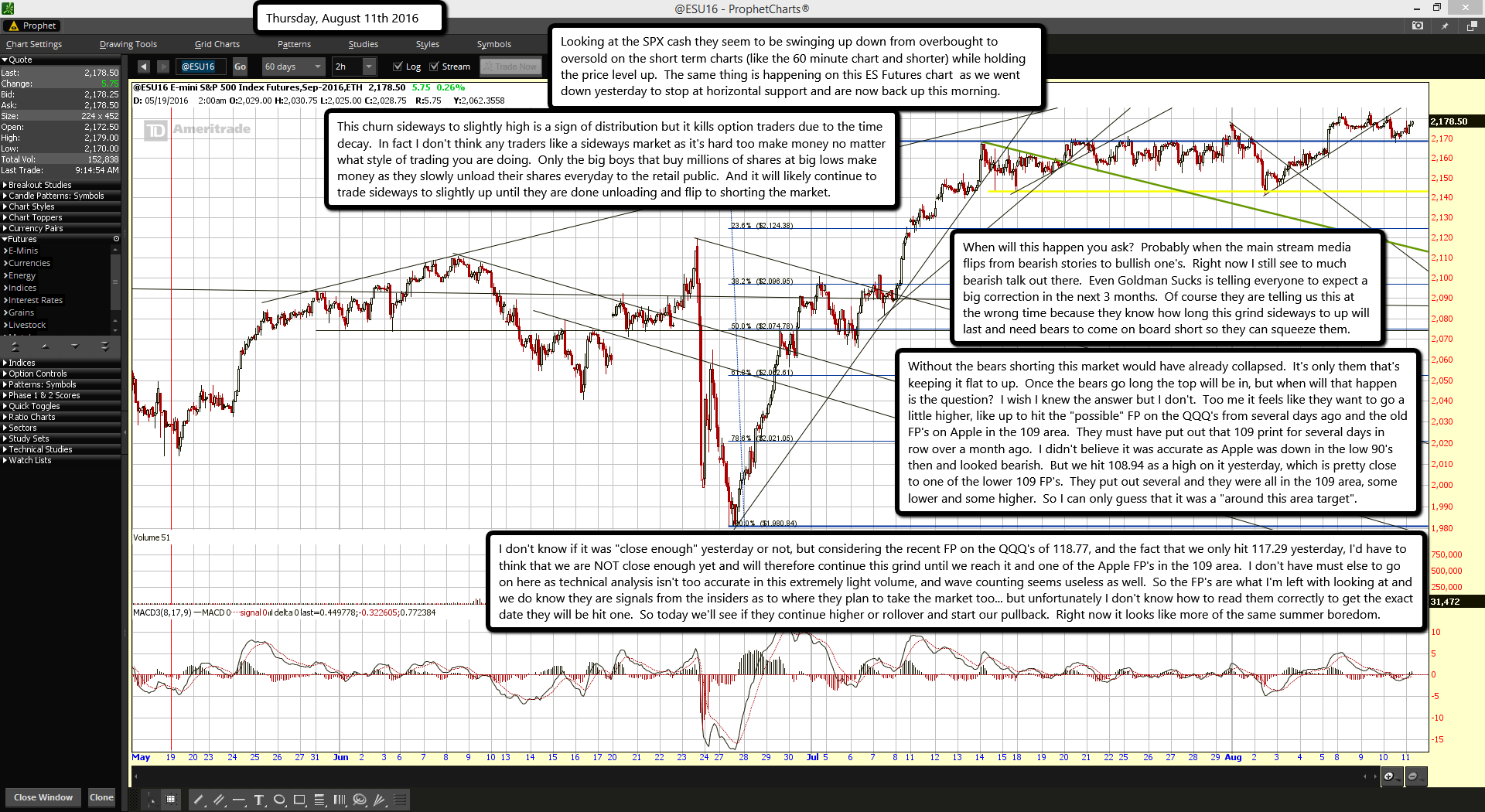 Looking at the SPX cash they seem to be swinging up down from overbought to oversold on the short term charts (like the 60 minute chart and shorter) while holding the price level up.  The same thing is happening on this ES Futures chart  as we went down yesterday to stop at horizontal support and are now back up this morning.

This churn sideways to slightly high is a sign of distribution but it kills option traders due to the time decay.  In fact I don't think any traders like a sideways market as it's hard too make money no matter what style of trading you are doing.  Only the big boys that buy millions of shares at big lows make money as they slowly unload their shares everyday to the retail public.  And it will likely continue to trade sideways to slightly up until they are done unloading and flip to shorting the market.

When will this happen you ask?  Probably when the main stream media flips from bearish stories to bullish one's.  Right now I still see to much bearish talk out there.  Even Goldman Sucks is telling everyone to expect a big correction in the next 3 months.  Of course they are telling us this at the wrong time because they know how long this grind sideways to up will last and need bears to come on board short so they can squeeze them.

Without the bears shorting this market would have already collapsed.  It's only them that's keeping it flat to up.  Once the bears go long the top will be in, but when will that happen is the question?  I wish I knew the answer but I don't.  Too me it feels like they want to go a little higher, like up to hit the "possible" FP on the QQQ's from several days ago and the old FP's on Apple in the 109 area.  They must have put out that 109 print for several days in row over a month ago.  I didn't believe it was accurate as Apple was down in the low 90's then and looked bearish.  But we hit 108.94 as a high on it yesterday, which is pretty close to one of the lower 109 FP's.  They put out several and they were all in the 109 area, some lower and some higher.  So I can only guess that it was a "around this area target".

I don't know if it was "close enough" yesterday or not, but considering the recent FP on the QQQ's of 118.77, and the fact that we only hit 117.29 yesterday, I'd have to think that we are NOT close enough yet and will therefore continue this grind until we reach it and one of the Apple FP's in the 109 area.  I don't have must else to go on here as technical analysis isn't too accurate in this extremely light volume, and wave counting seems useless as well.  So the FP's are what I'm left with looking at and we do know they are signals from the insiders as to where they plan to take the market too... but unfortunately I don't know how to read them correctly to get the exact date they will be hit one.  So today we'll see if they continue higher or rollover and start our pullback.  Right now it looks like more of the same summer boredom.