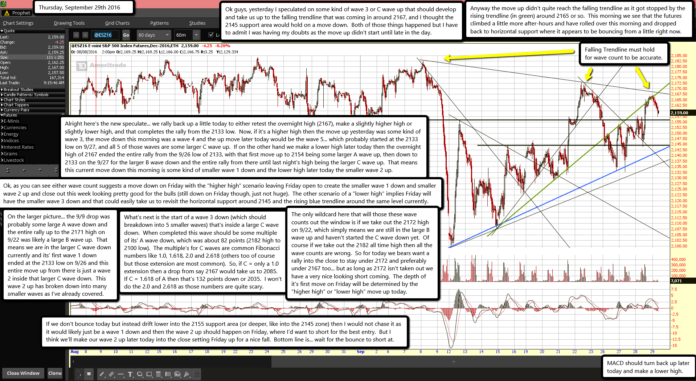 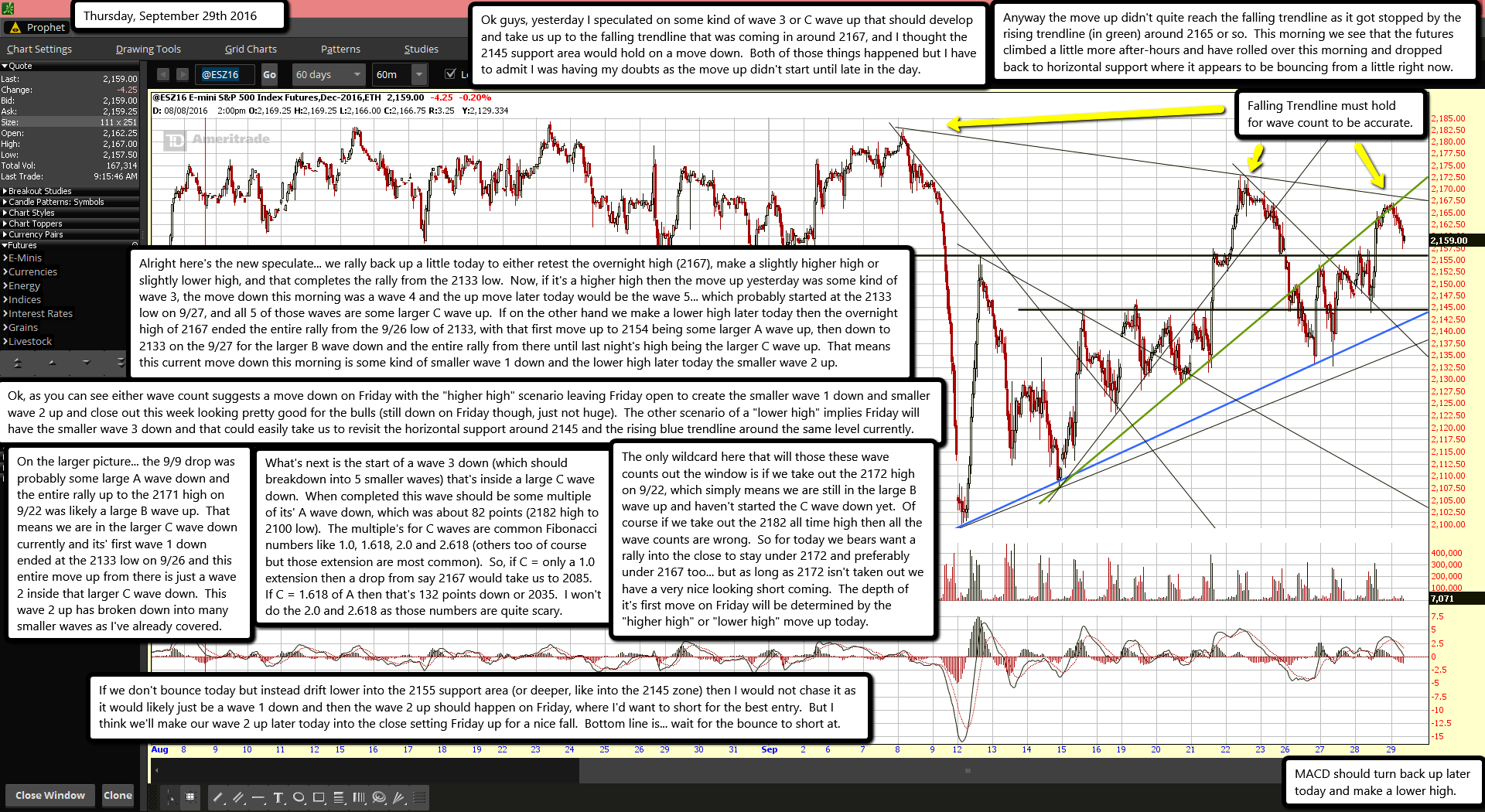 Ok guys, yesterday I speculated on some kind of wave 3 or C wave up that should develop and take us up to the falling trendline that was coming in around 2167, and I thought the 2145 support area would hold on a move down.  Both of those things happened but I have to admit I was having my doubts as the move up didn't start until late in the day.

Anyway the move up didn't quite reach the falling trendline as it got stopped by the rising trendline (in green) around 2165 or so.  This morning we see that the futures climbed a little more after-hours and have rolled over this morning and dropped back to horizontal support where it appears to be bouncing from a little right now.

Alright here's the new speculate... we rally back up a little today to either retest the overnight high (2167), make a slightly higher high or slightly lower high, and that completes the rally from the 2133 low.  Now, if it's a higher high then the move up yesterday was some kind of wave 3, the move down this morning was a wave 4 and the up move later today would be the wave 5... which probably started at the 2133 low on 9/27, and all 5 of those waves are some larger C wave up.  If on the other hand we make a lower high later today then the overnight high of 2167 ended the entire rally from the 9/26 low of 2133, with that first move up to 2154 being some larger A wave up, then down to 2133 on the 9/27 for the larger B wave down and the entire rally from there until last night's high being the larger C wave up.  That means this current move down this morning is some kind of smaller wave 1 down and the lower high later today the smaller wave 2 up.

Ok, as you can see either wave count suggests a move down on Friday with the "higher high" scenario leaving Friday open to create the smaller wave 1 down and smaller wave 2 up and close out this week looking pretty good for the bulls (still down on Friday though, just not huge).  The other scenario of a "lower high" implies Friday will have the smaller wave 3 down and that could easily take us to revisit the horizontal support around 2145 and the rising blue trendline around the same level currently.

On the larger picture... the 9/9 drop was probably some large A wave down and the entire rally up to the 2171 high on 9/22 was likely a large B wave up.  That means we are in the larger C wave down currently and its' first wave 1 down ended at the 2133 low on 9/26 and this entire move up from there is just a wave 2 inside that larger C wave down.  This wave 2 up has broken down into many smaller waves as I've already covered.

The only wildcard here that will those these wave counts out the window is if we take out the 2172 high on 9/22, which simply means we are still in the large B wave up and haven't started the C wave down yet.  Of course if we take out the 2182 all time high then all the wave counts are wrong.  So for today we bears want a rally into the close to stay under 2172 and preferably under 2167 too... but as long as 2172 isn't taken out we have a very nice looking short coming.  The depth of it's first move on Friday will be determined by the "higher high" or "lower high" move up today.

If we don't bounce today but instead drift lower into the 2155 support area (or deeper, like into the 2145 zone) then I would not chase it as it would likely just be a wave 1 down and then the wave 2 up should happen on Friday, where I'd want to short for the best entry.  But I think we'll make our wave 2 up later today into the close setting Friday up for a nice fall.  Bottom line is... wait for the bounce to short at.