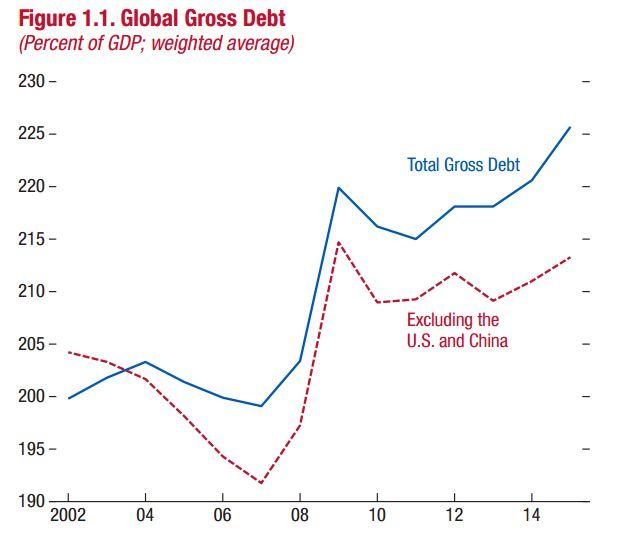 Worldwide public and private debt is at an all-time high, posing a substantial impediment to getting global economic growth back to normal, the International Monetary Fund has said.

The easy money policies of the world's top central banks has fed the problem, stoking a private-sector credit binge in China and rising public debt in some low-income countries, the IMF said in a new report.

Meanwhile, slow economic growth is making it hard for both companies and countries to cut their debt burdens - a process that can also drag on growth momentum because deleveraging companies slow spending and investment.

Without deleveraging, however, countries run the risk of fresh financial crises that can turn into deep recessions, the IMF's Fiscal Monitor report says.

"For a significant deleveraging to take place, restoring robust growth and returning to normal levels of inflation is necessary," the fund said.

Getting there requires governments to stimulate growth though investment, certain fiscal and business reforms, and targeted programs to help heavily indebted companies lower their debts.

Public and private debt -- excluding the financial sector's - at the end of last year hit $152 trillion, with around two-thirds owed by the private sector, the report said.

Measured against the size of the world economy, it rose from less than 200 percent of global GDP to 225 percent over the 15 years to 2015.

"High debt levels are costly as they often end up in financial recessions that are deeper and longer than normal recessions," he said in comments accompanying the report.

Moreover, "excessive private debt is a major headwind against the global recovery and a risk to financial stability."

While central banks have had to cut interest rates to support the recovery from the 2008 financial crisis, that has encouraged the debt pileup, the report said.

Dealing with the problem requires governments to implement well-calibrated programs to reduce private debt -- by cleaning up poor balance sheets of European banks and non-financial companies in China.

"Generally, where the financial system is under severe stress," the report said, "resolving the underlying problem quickly is critical."

The International Monetary Fund has singled out Australia as one of few countries where debt is increasing and bucking the global trend.

In its latest Fiscal Monitor, the IMF says after the global financial crisis, government debt in advanced economies rose rapidly, while private debt reached a turning point in 2012.

The largest reductions since were posted by those countries that entered the crisis with high debt levels.

"In some cases, however, private debt has continued to accumulate at a fast pace - notably, Australia, Canada and Singapore," it said in the report released in Washington on Wednesday."

Gross debt in the non-financial sector has more than doubled in nominal terms since the turn of the century, reaching $US152 trillion ($199 trillion) last year, and it's still rising, the International Monetary Fund said.

At a staggering 225 per cent of world GDP, non-financial sector global debt is at an all-time high.

Two-thirds, amounting to about $US100 trillion, consists of liabilities of the private sector which can carry great risks when they reach excessive levels, it warns.

"Resolving the 'private debt overhang' is ... not easy in the current global environment of low nominal growth," the IMF admits.

Slow global growth is making it difficult to pay off the obligations, "setting the stage for a vicious feedback loop in which lower growth hampers deleveraging and the debt overhang exacerbates the slowdown," said the Washington-based fund.

"Excessive private debt is a major headwind against the global recovery and a risk to financial stability," IMF fiscal chief Vitor Gaspar said in prepared remarks. "History has taught us that it is very easy to underestimate the risks associated with private debt during the upswing."

Much of the borrowing dates back to the boom in private debt that preceded the 2008 financial crisis, according to the IMF. While households and companies in advanced economies started to retrench following the crisis, the deleveraging has been uneven and in some instances debts kept rising, Gaspar said. Bad debts have ended up on government balance sheets.

There's no consensus on what levels of debt-to-GDP should be the considered alarming, the IMF said. However, financial crises tend to be associated with excessive private debt in both advanced and emerging economies, the fund said. In addition, research has shown that high debt is linked with lower growth, even when a crisis is avoided.