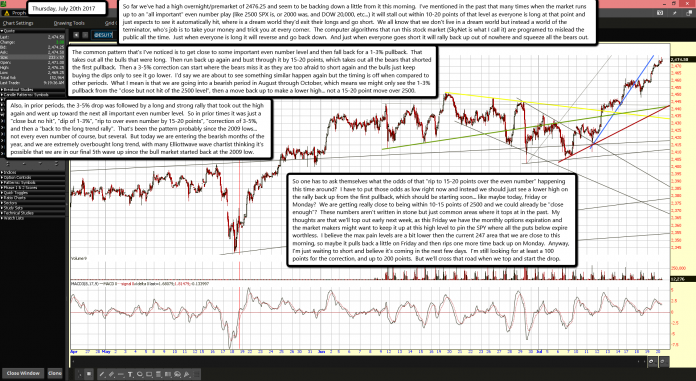 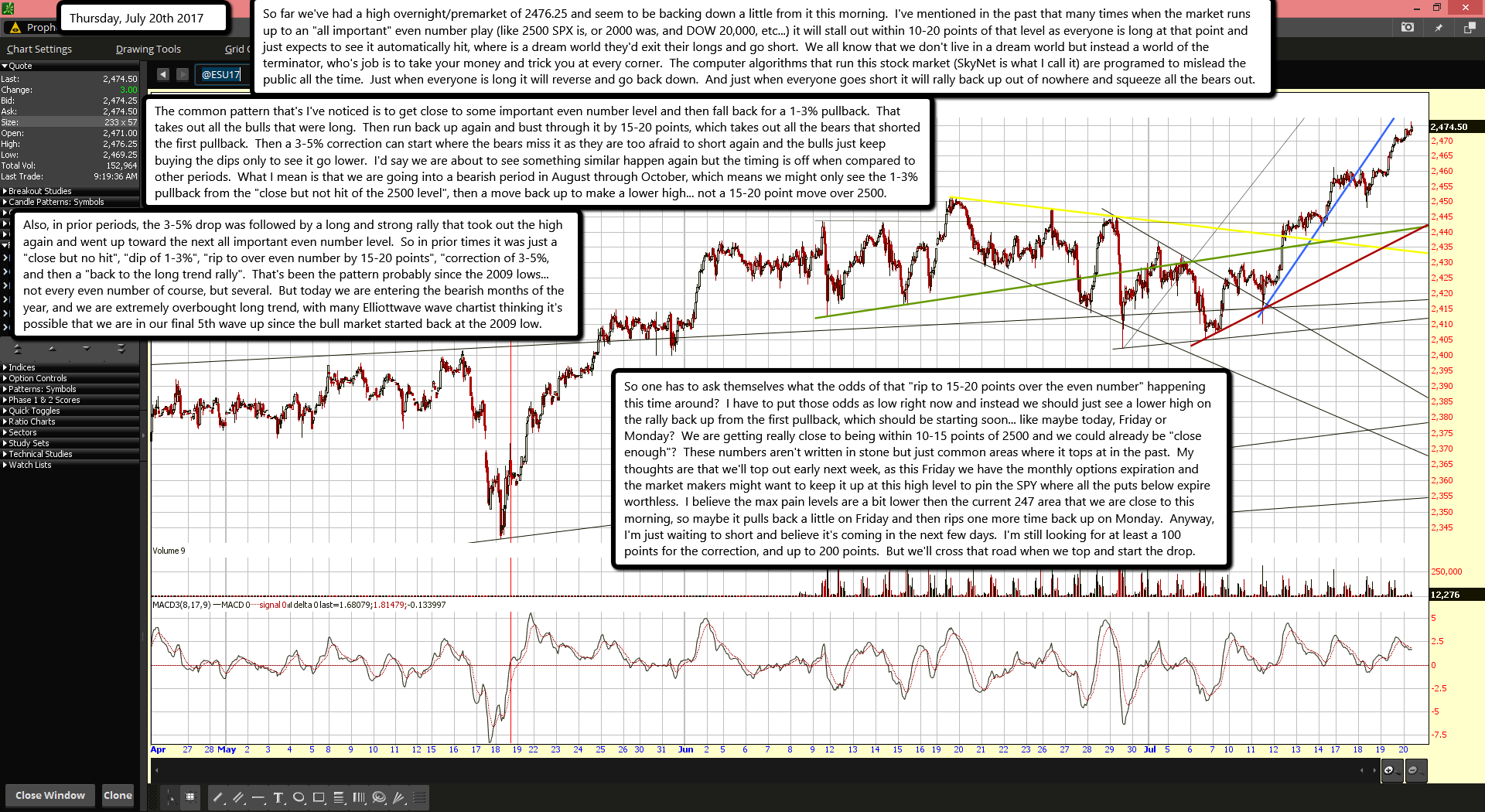 So far we've had a high overnight/premarket of 2476.25 and seem to be backing down a little from it this morning.  I've mentioned in the past that many times when the market runs up to an "all important" even number play (like 2500 SPX is, or 2000 was, and DOW 20,000, etc...) it will stall out within 10-20 points of that level as everyone is long at that point and just expects to see it automatically hit, where is a dream world they'd exit their longs and go short.  We all know that we don't live in a dream world but instead a world of the terminator, who's job is to take your money and trick you at every corner.  The computer algorithms that run this stock market (SkyNet is what I call it) are programed to mislead the public all the time.  Just when everyone is long it will reverse and go back down.  And just when everyone goes short it will rally back up out of nowhere and squeeze all the bears out.

The common pattern that's I've noticed is to get close to some important even number level and then fall back for a 1-3% pullback.  That takes out all the bulls that were long.  Then run back up again and bust through it by 15-20 points, which takes out all the bears that shorted the first pullback.  Then a 3-5% correction can start where the bears miss it as they are too afraid to short again and the bulls just keep buying the dips only to see it go lower.  I'd say we are about to see something similar happen again but the timing is off when compared to other periods.  What I mean is that we are going into a bearish period in August through October, which means we might only see the 1-3% pullback from the "close but not hit of the 2500 level", then a move back up to make a lower high... not a 15-20 point move over 2500.

Also, in prior periods, the 3-5% drop was followed by a long and strong rally that took out the high again and went up toward the next all important even number level.  So in prior times it was just a "close but no hit", "dip of 1-3%", "rip to over even number by 15-20 points", "correction of 3-5%, and then a "back to the long trend rally".  That's been the pattern probably since the 2009 lows... not every even number of course, but several.  But today we are entering the bearish months of the year, and we are extremely overbought long trend, with many Elliottwave wave chartist thinking it's possible that we are in our final 5th wave up since the bull market started back at the 2009 low.

So one has to ask themselves what the odds of that "rip to 15-20 points over the even number" happening this time around?  I have to put those odds as low right now and instead we should just see a lower high on the rally back up from the first pullback, which should be starting soon... like maybe today, Friday or Monday?  We are getting really close to being within 10-15 points of 2500 and we could already be "close enough"?  These numbers aren't written in stone but just common areas where it tops at in the past.  My thoughts are that we'll top out early next week, as this Friday we have the monthly options expiration and the market makers might want to keep it up at this high level to pin the SPY where all the puts below expire worthless.  I believe the max pain levels are a bit lower then the current 247 area that we are close to this morning, so maybe it pulls back a little on Friday and then rips one more time back up on Monday.  Anyway, I'm just waiting to short and believe it's coming in the next few days.  I'm still looking for at least a 100 points for the correction, and up to 200 points.  But we'll cross that road when we top and start the drop.