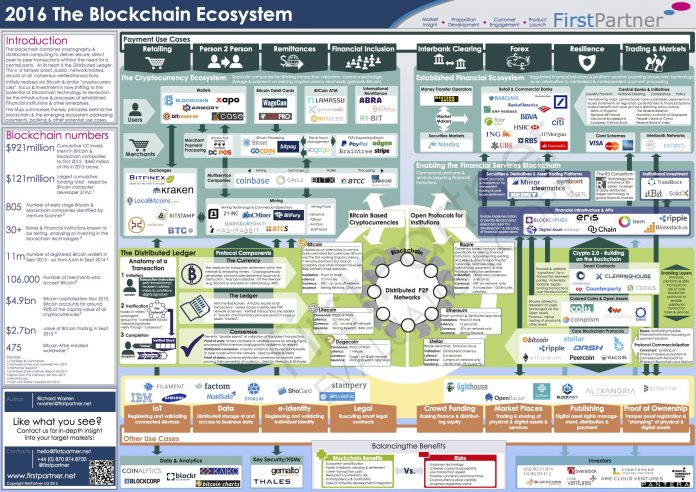 Goldman Sachs has clinched an important victory in its race to transition from a stodgy investment bank into a fintech powerhouse: it was awarded a patent for its proposed "SETLcoin" cryptocurrency settlement system, according to CoinDesk, the first to report on the patent.

“The US Patent and Trademark Office (USPTO) published Goldman's patent on July 11, entitled "Cryptographic currency for securities settlement". The bank made headlines when the existence of the patent application was revealed in late 2015.”

The concept envisions a system for settling securities trades using cryptocurrency instead of cash or other cash equivalents. When filed in December of 2015, the application notably outlined methods for exchanging SETLcoins for digitized stocks for firms like Google and Microsoft, as well as cryptocurrencies, naming bitcoin and litecoin in particular, as CoinDesk explains.

In its patent application, Goldman highlights the shortcomings of the clearing and settlement system, explaining how counterparties are forced to bear unnecessary risk during the period between when a trade is made and when it is settled, which can be up to three days for stock trades.

“The settlement of securities involves a process whereby securities or interests in securities (e.g., debt, equity, or derivative contracts) are delivered, usually against payment of money. A number of risks arise for the parties during the settlement interval that follows trading and precedes settlement. For example, after a trade for a security and before settlement, the rights of the purchaser are contractual and therefore personal; however, because such rights are merely personal, these rights are at risk in the event of the insolvency of the either counterparty to the trade. After settlement, the purchaser owns the securities, and the purchaser` rights are proprietary. Clearing involves modifying contractual obligations to facilitate settlement. Clearing houses, such as the National Securities Clearing Corporation (NSCC), provide clearing, settlement, risk management, central counterparty services, and a guarantee of completion for certain transactions (e.g., broker-to-broker trades, depositary receipts, and exchange-traded funds), and they serve as the central counterparty for trades in the U.S. securities markets. In the United States, the settlement date for marketable stocks can be an extended length of time--three business days after the trade is executed and for listed options and government securities it is usually one day after the execution.”

...before providing a detailed description of how its SETLCoin system works, along with a summary of its most important innovation: the reduction in settlement times.

To be sure, Goldman knows what it is doing: a recent chart showing the blockchain ecosystem confirms that it is ripe for a major bank stepping in and profiting from the numerous "externalities":

According to Goldman, SETLCoin is a cryptocurrency that can be exchanged for financial securities over a peer-to-peer network, allowing trades to settle instantly because transfer of the SETLCoin is instant. Here’s how it will work:

“…SETLcoin wallet holds multiple positionable items (e.g., a security item, such as a share), herein referred to as a Positional Item inside Cryptographic currency (PIC), and a position (i.e., a quantity of the PIC represented by an SETLcoin wallet). A PIC is an agreed upon reference used by the peer-to-peer network to refer to, e.g., a particular security. For example, "IBM" (the stock market symbol of the company by the same name) can also be a PIC used by the peer-to-peer network to refer to IBM stock. A PIC, in some embodiments, is determined (and invalidated) by an issuer. An issuer (e.g., a company, underwriter, municipality, government, etc.) can have multiple PICS to represent different types of securities. For example, IBM stocks can be represented by PIC "IBM-S" and IBM bonds by PIC "IBM-B". In some embodiments, PICS are issued (and destroyed) by highly authoritative entities. For example, dollars available on the SETLcoin network represented by, e.g., PIC "USD" may be authoritatively issued by, for example, the U.S. Treasury. However, the described technology can issue PICS based on various other techniques (e.g., network node agreement, exchange regulation, lease or purchase, auction, etc.) and can be named based on, e.g., a company's name, its market symbol, its branding, its security name, availability, or a preferred format (e.g., length, abbreviation, etc.).

It is unclear if and how Goldman's foray into blockchain will impact prices of existing tokens. You can read the whole patent here.

Lest we not forget that this "new world currency" was foretold back in 1988 on the cover of "The Economist" magazine.

Do you every wonder how that cover with that coin looks so similar to BitCoin today?  I mean, how could anyone have thought about "mining coins" when there wasn't even an internet back then? 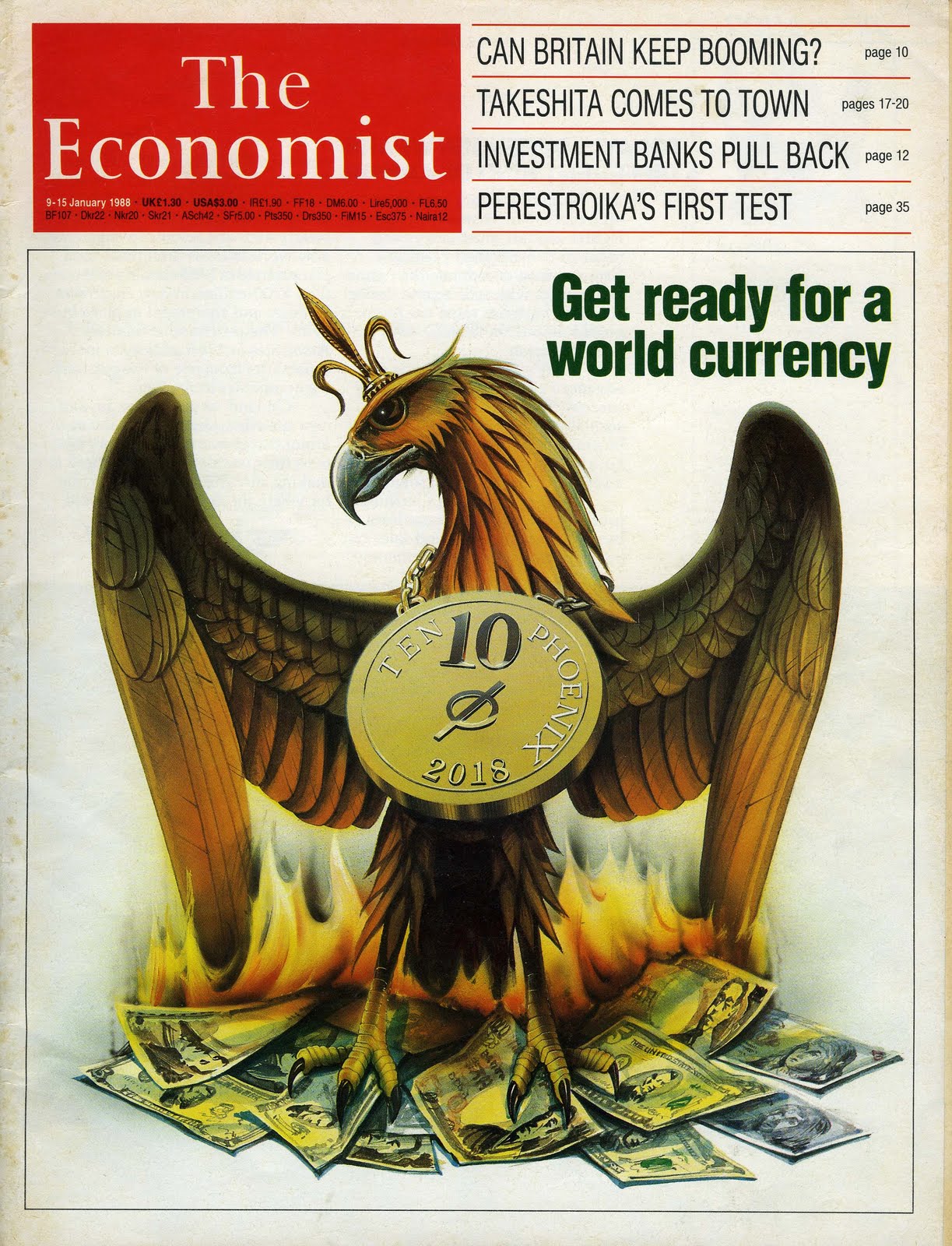 It's so bizarre to think about and scary to look at that coin and how accurate it looks that you'll have to think someone planned it many, many years ago (or had a time machine... LOL).  So, tell me how you are going to get people to accept this new currency?  I'd have to say that the only way possible is to crash the stock market so hard that people will be begging for help from the government in any form of money they will give them... and of course 2018 is just around the corner now.

So, if I were "them" I'd start with a stock market crash this year... as in October of 2017 or so.  Then I'd carry it into all of 2018 so that by the time the year ended we'd see half or more of the market erased.  A scare like that would make so many innocent people lose most or all of their 401k money that they would accept this new digital money.

Remember that the government has already got a system of money in placed called SDR's (Special Drawing Rights) that is supposed to be backed up with a basket of currencies.  Now I don't know if that will be the new money  or not, but certainly we are going to become a lot more digital after 2018.

It's always been my belief that "they" (as in the rulers of the world... the elite) let BitCoin (and other Crypto-currencies) get started and accepted by the public as they wanted everyone to get used to a digital system of money.  In fact it wouldn't surprise me if "they" didn't fund the creation of it and trick the public into thinking they were safer to stop using the US Dollar and go to BitCoin.

It's the biggest trick of all... tell everyone that hates the elite and what they've done to make the dollar almost worthless (in buying power) that there is a way to bypass "them" by switching to a new digital currency called "BitCoin".  They even let the stock price soar to record highs.  Then when everyone is "ok" with digital money they create their own through one of their satan run banks... aka, Goldman Sachs (GS).

Next would be to start taxing all other digital money except the GS Coins so that people will abandon BitCoin for their new money.  It's coming folks... and it's been a multi-decade plan by "them" that so far is playing out just like they expected.