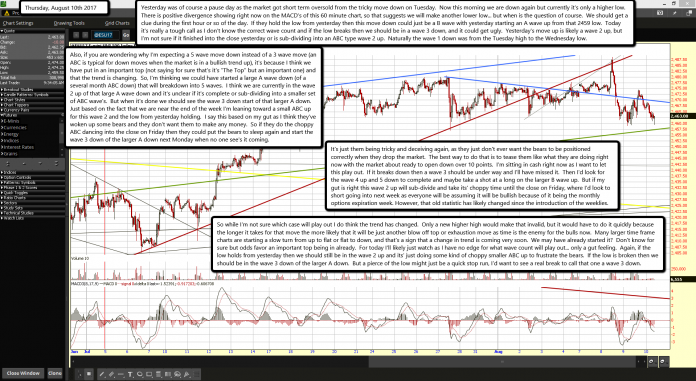 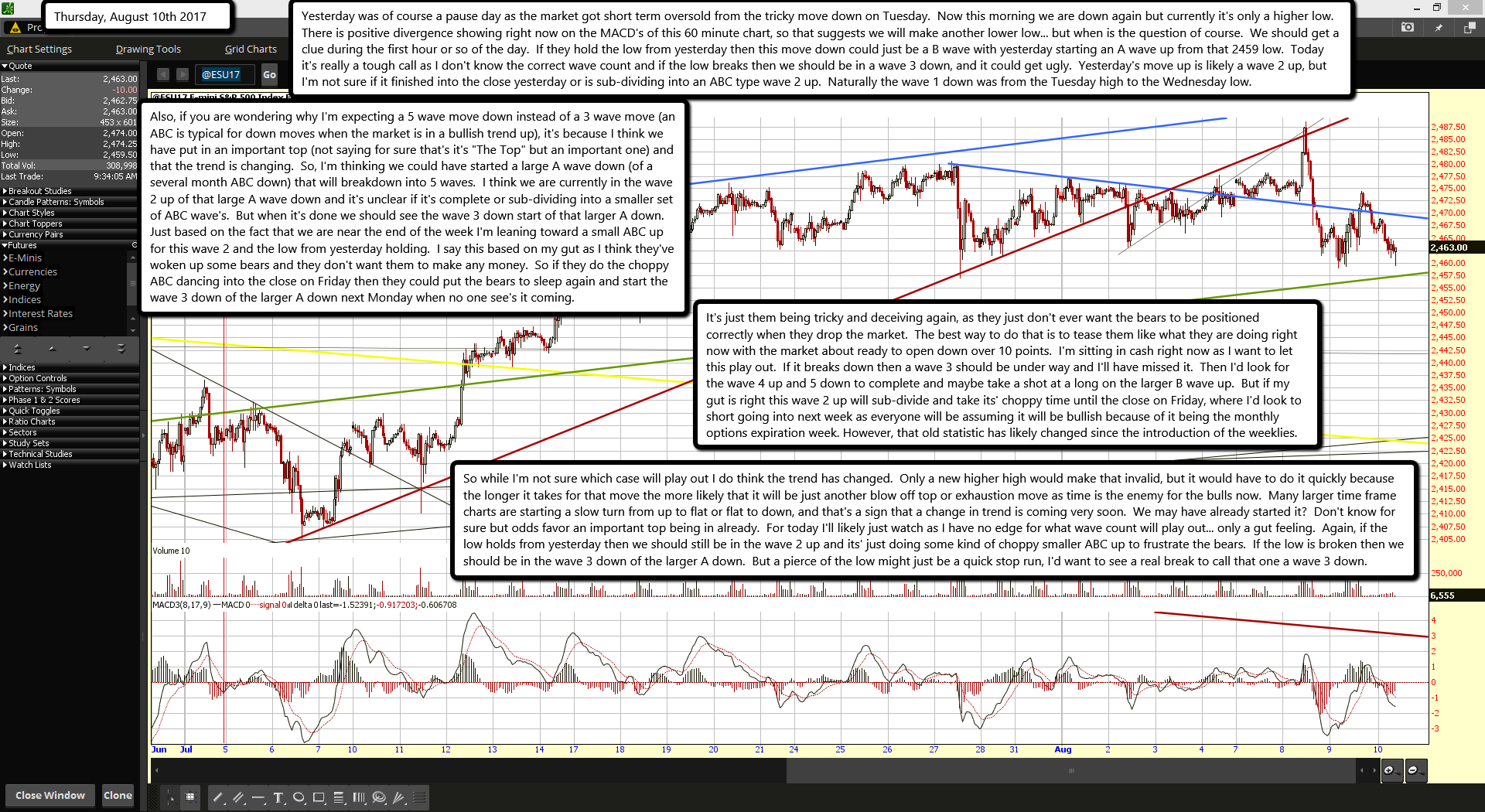 Yesterday was of course a pause day as the market got short term oversold from the tricky move down on Tuesday.  Now this morning we are down again but currently it's only a higher low.  There is positive divergence showing right now on the MACD's of this 60 minute chart, so that suggests we will make another lower low... but when is the question of course.  We should get a clue during the first hour or so of the day.  If they hold the low from yesterday then this move down could just be a B wave with yesterday starting an A wave up from that 2459 low.  Today it's really a tough call as I don't know the correct wave count and if the low breaks then we should be in a wave 3 down, and it could get ugly.  Yesterday's move up is likely a wave 2 up, but I'm not sure if it finished into the close yesterday or is sub-dividing into an ABC type wave 2 up.  Naturally the wave 1 down was from the Tuesday high to the Wednesday low.

Also, if you are wondering why I'm expecting a 5 wave move down instead of a 3 wave move (an ABC is typical for down moves when the market is in a bullish trend up), it's because I think we have put in an important top (not saying for sure that's it's "The Top" but an important one) and that the trend is changing.  So, I'm thinking we could have started a large A wave down (of a several month ABC down) that will breakdown into 5 waves.  I think we are currently in the wave 2 up of that large A wave down and it's unclear if it's complete or sub-dividing into a smaller set of ABC wave's.  But when it's done we should see the wave 3 down start of that larger A down.  Just based on the fact that we are near the end of the week I'm leaning toward a small ABC up for this wave 2 and the low from yesterday holding.  I say this based on my gut as I think they've woken up some bears and they don't want them to make any money.  So if they do the choppy ABC dancing into the close on Friday then they could put the bears to sleep again and start the wave 3 down of the larger A down next Monday when no one see's it coming.

It's just them being tricky and deceiving again, as they just don't ever want the bears to be positioned correctly when they drop the market.  The best way to do that is to tease them like what they are doing right now with the market about ready to open down over 10 points.  I'm sitting in cash right now as I want to let this play out.  If it breaks down then a wave 3 should be under way and I'll have missed it.  Then I'd look for the wave 4 up and 5 down to complete and maybe take a shot at a long on the larger B wave up.  But if my gut is right this wave 2 up will sub-divide and take its' choppy time until the close on Friday, where I'd look to short going into next week as everyone will be assuming it will be bullish because of it being the monthly options expiration week. However, that old statistic has likely changed since the introduction of the weeklies.

So while I'm not sure which case will play out I do think the trend has changed.  Only a new higher high would make that invalid, but it would have to do it quickly because the longer it takes for that move the more likely that it will be just another blow off top or exhaustion move as time is the enemy for the bulls now.  Many larger time frame charts are starting a slow turn from up to flat or flat to down, and that's a sign that a change in trend is coming very soon.  We may have already started it?  Don't know for sure but odds favor an important top being in already.  For today I'll likely just watch as I have no edge for what wave count will play out... only a gut feeling.  Again, if the low holds from yesterday then we should still be in the wave 2 up and its' just doing some kind of choppy smaller ABC up to frustrate the bears.  If the low is broken then we should be in the wave 3 down of the larger A down.  But a pierce of the low might just be a quick stop run, I'd want to see a real break to call that one a wave 3 down.