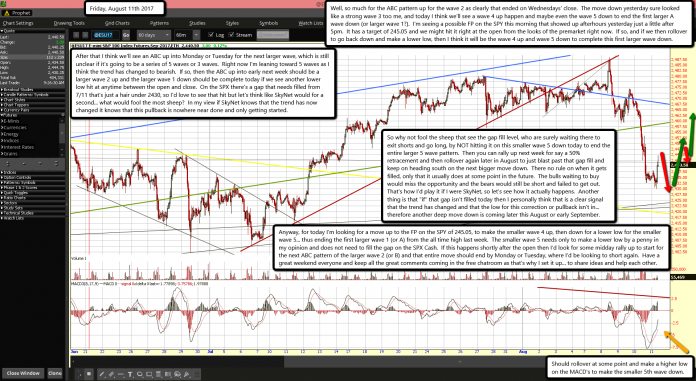 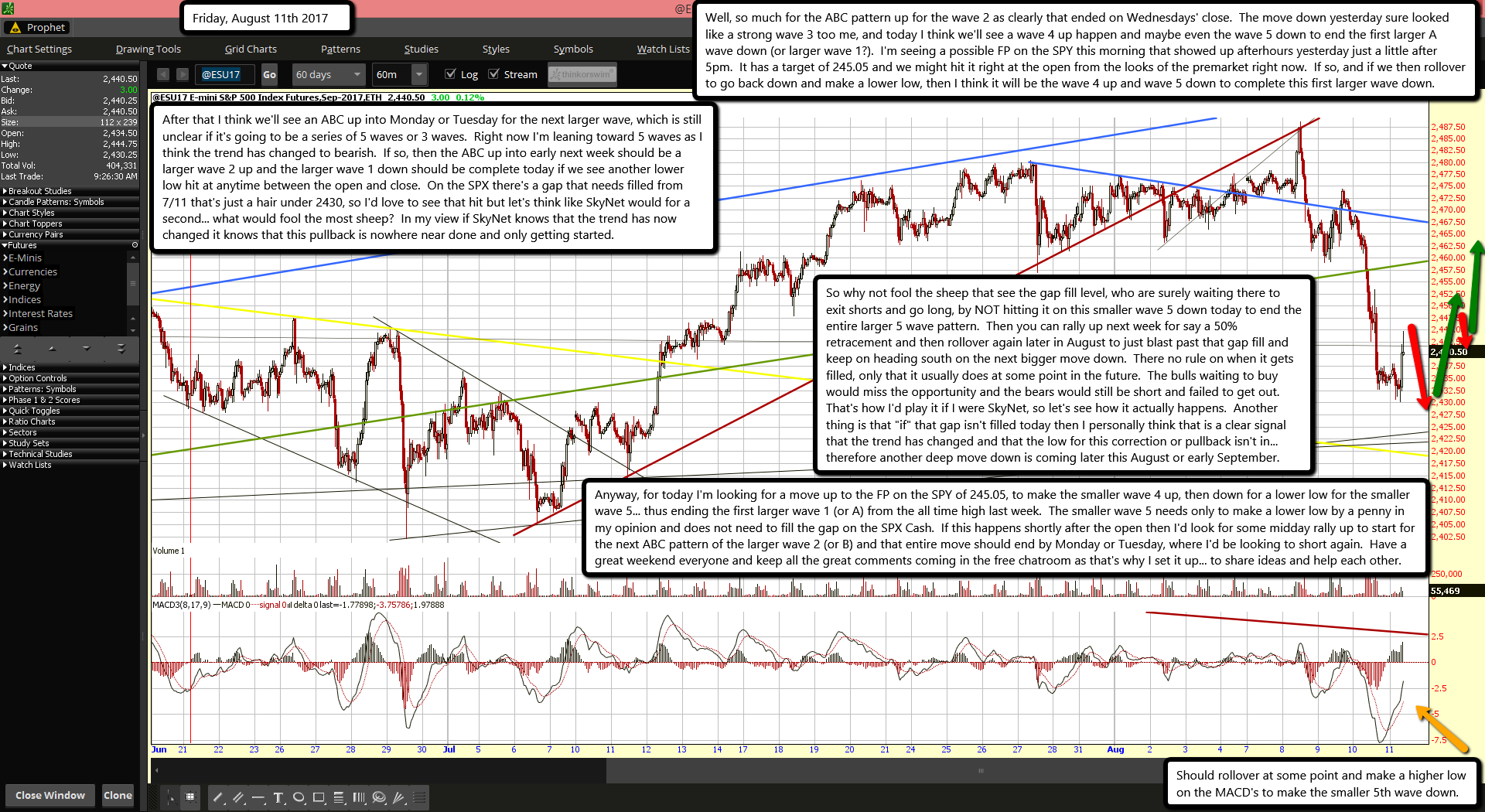 Well, so much for the ABC pattern up for the wave 2 as clearly that ended on Wednesdays' close.  The move down yesterday sure looked like a strong wave 3 too me, and today I think we'll see a wave 4 up happen and maybe even the wave 5 down to end the first larger A wave down (or larger wave 1?).  I'm seeing a possible FP on the SPY this morning that showed up afterhours yesterday just a little after 5pm.  It has a target of 245.05 and we might hit it right at the open from the looks of the premarket right now.  If so, and if we then rollover to go back down and make a lower low, then I think it will be the wave 4 up and wave 5 down to complete this first larger wave down.

After that I think we'll see an ABC up into Monday or Tuesday for the next larger wave, which is still unclear if it's going to be a series of 5 waves or 3 waves.  Right now I'm leaning toward 5 waves as I think the trend has changed to bearish.  If so, then the ABC up into early next week should be a larger wave 2 up and the larger wave 1 down should be complete today if we see another lower low hit at anytime between the open and close.  On the SPX there's a gap that needs filled from 7/11 that's just a hair under 2430, so I'd love to see that hit but let's think like SkyNet would for a second... what would fool the most sheep?  In my view if SkyNet knows that the trend has now changed it knows that this pullback is nowhere near done and only getting started.

So why not fool the sheep that see the gap fill level, who are surely waiting there to exit shorts and go long, by NOT hitting it on this smaller wave 5 down today to end the entire larger 5 wave pattern.  Then you can rally up next week for say a 50% retracement and then rollover again later in August to just blast past that gap fill and keep on heading south on the next bigger move down.  There no rule on when it gets filled, only that it usually does at some point in the future.  The bulls waiting to buy would miss the opportunity and the bears would still be short and failed to get out.  That's how I'd play it if I were SkyNet, so let's see how it actually happens.  Another thing is that "if" that gap isn't filled today then I personally think that is a clear signal that the trend has changed and that the low for this correction or pullback isn't in... therefore another deep move down is coming later this August or early September.

Anyway, for today I'm looking for a move up to the FP on the SPY of 245.05, to make the smaller wave 4 up, then down for a lower low for the smaller wave 5... thus ending the first larger wave 1 (or A) from the all time high last week.  The smaller wave 5 needs only to make a lower low by a penny in my opinion and does not need to fill the gap on the SPX Cash.  If this happens shortly after the open then I'd look for some midday rally up to start for the next ABC pattern of the larger wave 2 (or B) and that entire move should end by Monday or Tuesday, where I'd be looking to short again.  Have a great weekend everyone and keep all the great comments coming in the free chatroom as that's why I set it up... to share ideas and help each other.