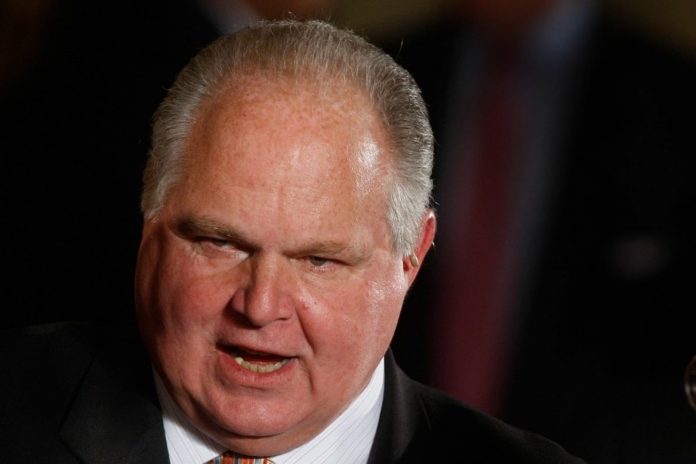 Rush Limbaugh didn't say the magic words, but on Tuesday he basically accused the media of creating fake news about Hurricane Irma, which is threatening Florida after hitting Barbuda and Antigua. The storm's 185-mile-per-hour winds tied the record high for any Atlantic hurricane making landfall.

“These storms, once they actually hit, are never as strong as they're reported,” Limbaugh claimed on his syndicated radio show. He added that “the graphics have been created to make it look like the ocean's having an exorcism, just getting rid of the devil here in the form of this hurricane, this bright red stuff.”

Why would the media exaggerate the threat of a hurricane? Here's Limbaugh's theory:

There is symbiotic relationship between retailers and local media, and it’s related to money. It revolves around money. You have major, major industries and businesses which prosper during times of crisis and panic, such as a hurricane, which could destroy or greatly damage people’s homes, and it could interrupt the flow of water and electricity. So what happens?

Well, the TV stations begin reporting this and the panic begins to increase. And then people end up going to various stores to stock up on water and whatever they might need for home repairs and batteries and all this that they’re advised to get, and a vicious circle is created. You have these various retail outlets who spend a lot of advertising dollars with the local media.

The local media, in turn, reports in such a way as to create the panic way far out, which sends people into these stores to fill up with water and to fill up with batteries, and it becomes a never-ending repeated cycle. And the two coexist. So the media benefits with the panic with increased eyeballs, and the retailers benefit from the panic with increased sales, and the TV companies benefit because they’re getting advertising dollars from the businesses that are seeing all this attention from customers.

To state the obvious, these are potentially dangerous comments from Limbaugh, who is based in Palm Beach, Fla. He is encouraging listeners who might be in Irma's path not to take seriously the official guidance disseminated through the media.

“I wish that not everything that involved news had become corrupted and politicized, but it just has,” he said.

More broadly, Limbaugh's bad advice reveals the metastasizing nature of “fake news” attacks on the press, which have been led by President Trump. How did we get from Trump's claim that he has “never seen more dishonest media than, frankly, the political media” to the idea that weather reports are phony, too?

Alex Jones might have something to do with it. The Infowars founder — who has an “amazing” reputation, according to Trump — has for years promoted the notion that the U.S. government possesses the power to conjure and control weather events. Just last week, as Hurricane Harvey battered Texas, Jones devoted part of his show to questioning why the government didn't “use the technologies to kill [the storm] out in the gulf.”

“It is weird how these storms go,” he said, suggesting Harvey might have been manufactured or manipulated. “They just sit over a city.”

Jones's contention is that the government — or, more precisely, the “deep state,” now that Trump is president — uses its “weather weapon” to stoke fear of climate change and promote a liberal agenda.

Limbaugh didn't say the deep state directs storms toward major cities, but he did say “hurricanes are always forecast to hit major population centers because, after all, major population centers is where the major damage will take place and where we can demonstrate that these things are getting bigger and they’re getting more frequent and they’re getting worse — all because of climate change.”

Thus we have two of the president's biggest promoters in the media telling people that news about a storm — or perhaps even the storm itself — is fake. There could be serious consequences to Trump's ceaseless effort to lower trust in institutions such as the government and the press — consequences that the president and his team might not have fully considered.

On the morning before Harvey hit Texas, CNN's Jim Acosta tweeted that a moment when “millions will be relying on national and local news outlets to stay safe during hurricane” is “not a good time to take shots at 'fake news.'”

Brad Parscale, the digital media director of Trump's campaign, scoffed at Acosta's warning, tweeting that “nobody said the weather is fake.”

Actually, whether Parscale and Trump realize it or not, somebody does say the weather is fake.

My thoughts on it... the Weather is 100% controlled by the elite and used to create Weather Weapons.

Hurricane Harvey & the Weather Terrorists from Land, Sea and Air