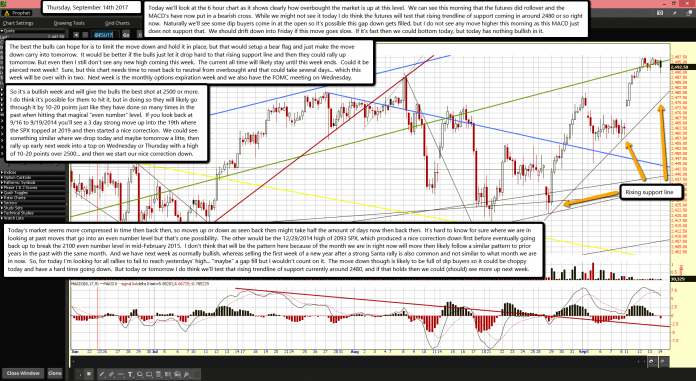 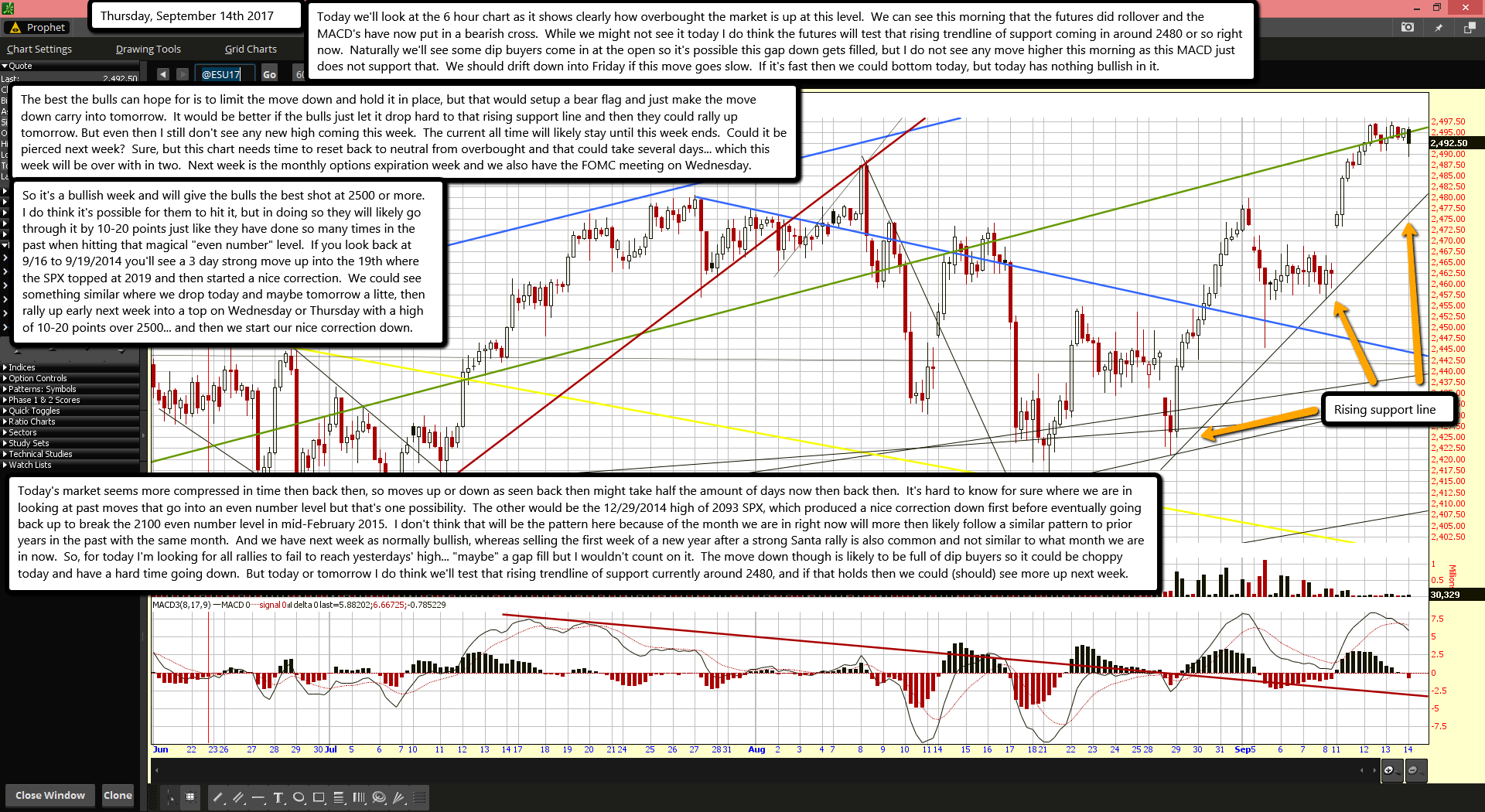 Today we'll look at the 6 hour chart as it shows clearly how overbought the market is up at this level.  We can see this morning that the futures did rollover and the MACD's have now put in a bearish cross.  While we might not see it today I do think the futures will test that rising trendline of support coming in around 2480 or so right now.  Naturally we'll see some dip buyers come in at the open so it's possible this gap down gets filled, but I do not see any move higher this morning as this MACD just does not support that.  We should drift down into Friday if this move goes slow.  If it's fast then we could bottom today, but today has nothing bullish in it.

The best the bulls can hope for is to limit the move down and hold it in place, but that would setup a bear flag and just make the move down carry into tomorrow.  It would be better if the bulls just let it drop hard to that rising support line and then they could rally up tomorrow. But even then I still don't see any new high coming this week.  The current all time will likely stay until this week ends.  Could it be pierced next week?  Sure, but this chart needs time to reset back to neutral from overbought and that could take several days... which this week will be over with in two.  Next week is the monthly options expiration week and we also have the FOMC meeting on Wednesday.

So it's a bullish week and will give the bulls the best shot at 2500 or more.  I do think it's possible for them to hit it, but in doing so they will likely go through it by 10-20 points just like they have done so many times in the past when hitting that magical "even number" level.  If you look back at 9/16 to 9/19/2014 you'll see a 3 day strong move up into the 19th where the SPX topped at 2019 and then started a nice correction.  We could see something similar where we drop today and maybe tomorrow a litte, then rally up early next week into a top on Wednesday or Thursday with a high of 10-20 points over 2500... and then we start our nice correction down.

Today's market seems more compressed in time then back then, so moves up or down as seen back then might take half the amount of days now then back then.  It's hard to know for sure where we are in looking at past moves that go into an even number level but that's one possibility.  The other would be the 12/29/2014 high of 2093 SPX, which produced a nice correction down first before eventually going back up to break the 2100 even number level in mid-February 2015.  I don't think that will be the pattern here because of the month we are in right now will more then likely follow a similar pattern to prior years in the past with the same month.  And we have next week as normally bullish, whereas selling the first week of a new year after a strong Santa rally is also common and not similar to what month we are in now.  So, for today I'm looking for all rallies to fail to reach yesterdays' high... "maybe" a gap fill but I wouldn't count on it.  The move down though is likely to be full of dip buyers so it could be choppy today and have a hard time going down.  But today or tomorrow I do think we'll test that rising trendline of support currently around 2480, and if that holds then we could (should) see more up next week.