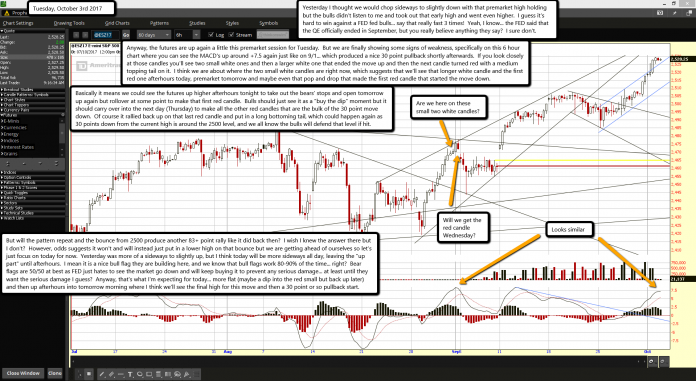 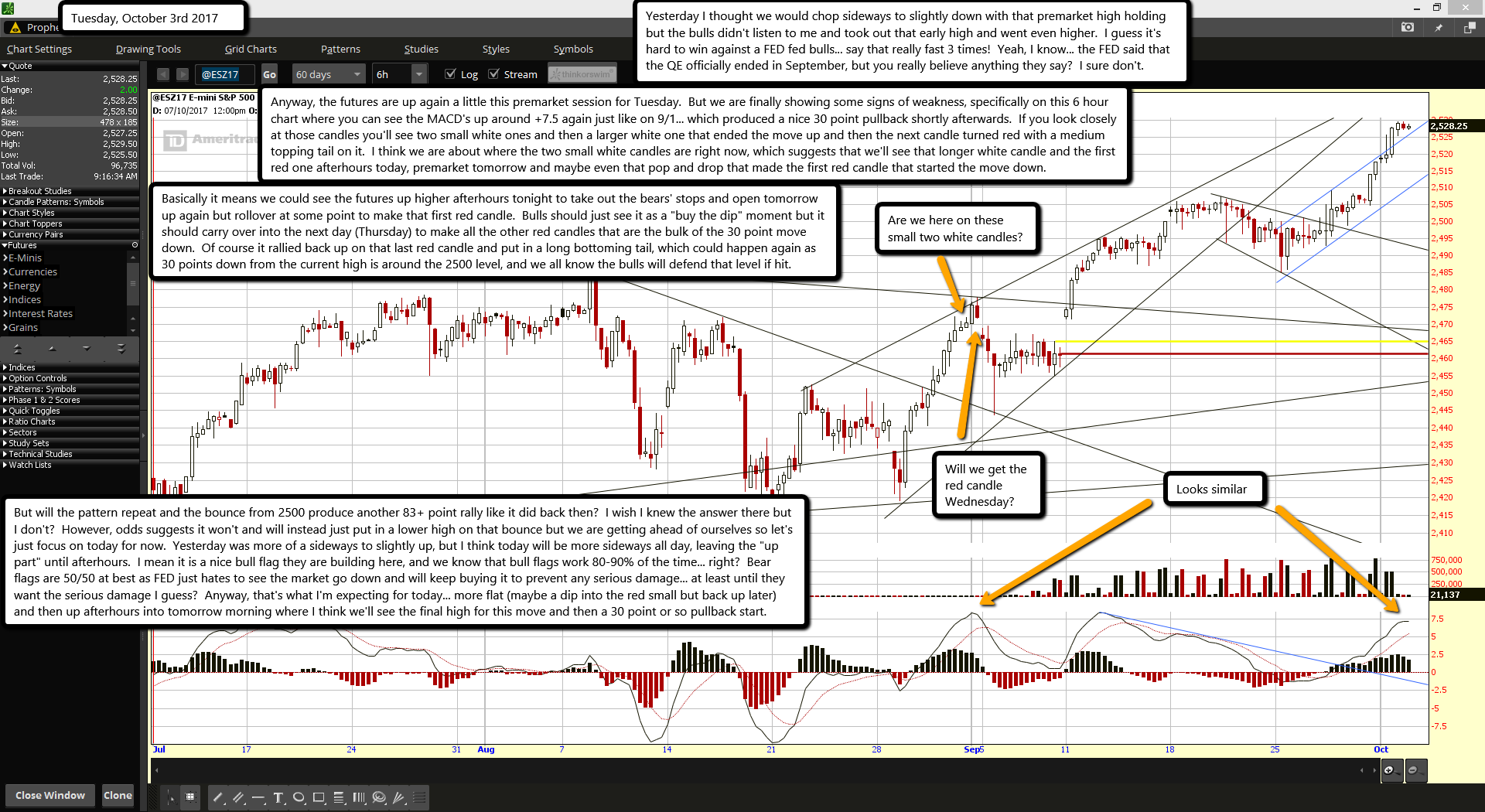 Yesterday I thought we would chop sideways to slightly down with that premarket high holding but the bulls didn't listen to me and took out that early high and went even higher.  I guess it's hard to win against a FED fed bulls... say that really fast 3 times!  Yeah, I know... the FED said that the QE officially ended in September, but you really believe anything they say?  I sure don't.

Anyway, the futures are up again a little this premarket session for Tuesday.  But we are finally showing some signs of weakness, specifically on this 6 hour chart where you can see the MACD's up around +7.5 again just like on 9/1... which produced a nice 30 point pullback shortly afterwards.  If you look closely at those candles you'll see two small white ones and then a larger white one that ended the move up and then the next candle turned red with a medium topping tail on it.  I think we are about where the two small white candles are right now, which suggests that we'll see that longer white candle and the first red one afterhours today, premarket tomorrow and maybe even that pop and drop that made the first red candle that started the move down.

Basically it means we could see the futures up higher afterhours tonight to take out the bears' stops and open tomorrow up again but rollover at some point to make that first red candle.  Bulls should just see it as a "buy the dip" moment but it should carry over into the next day (Thursday) to make all the other red candles that are the bulk of the 30 point move down.  Of course it rallied back up on that last red candle and put in a long bottoming tail, which could happen again as 30 points down from the current high is around the 2500 level, and we all know the bulls will defend that level if hit.

But will the pattern repeat and the bounce from 2500 produce another 83+ point rally like it did back then?  I wish I knew the answer there but I don't?  However, odds suggests it won't and will instead just put in a lower high on that bounce but we are getting ahead of ourselves so let's just focus on today for now.  Yesterday was more of a sideways to slightly up, but I think today will be more sideways all day, leaving the "up part" until afterhours.  I mean it is a nice bull flag they are building here, and we know that bull flags work 80-90% of the time... right?  Bear flags are 50/50 at best as FED just hates to see the market go down and will keep buying it to prevent any serious damage... at least until they want the serious damage I guess?  Anyway, that's what I'm expecting for today... more flat (maybe a dip into the red small but back up later) and then up afterhours into tomorrow morning where I think we'll see the final high for this move and then a 30 point or so pullback start.