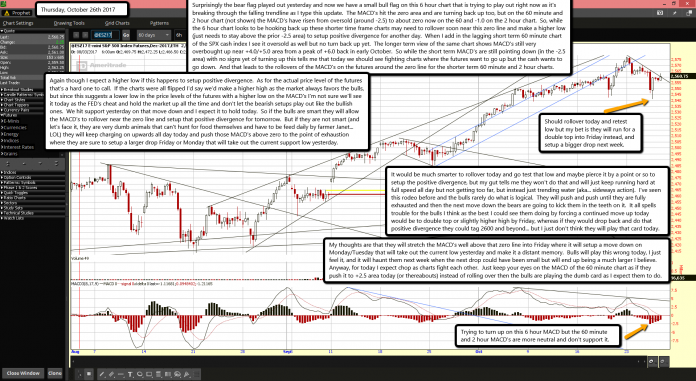 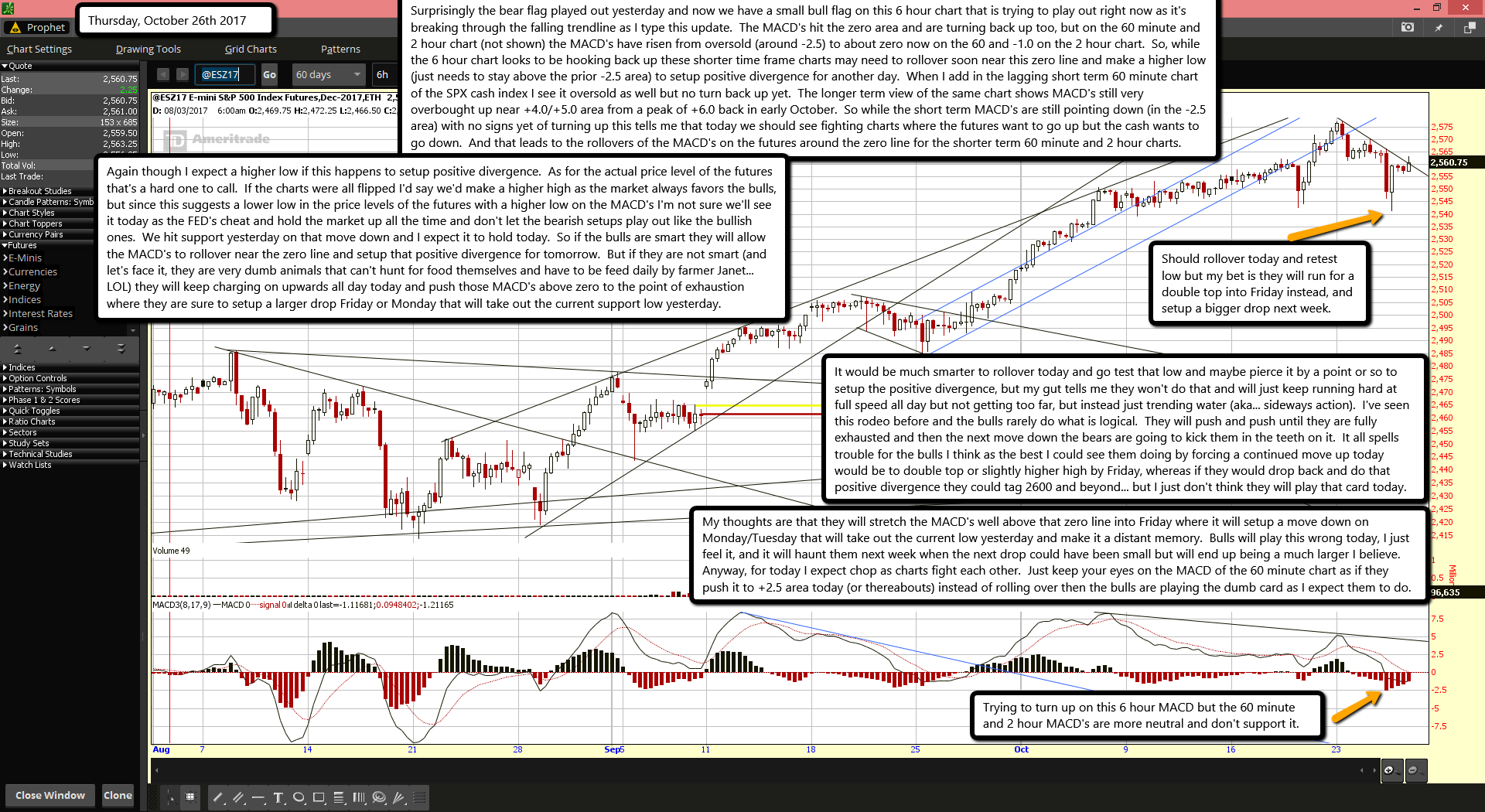 Surprisingly the bear flag played out yesterday and now we have a small bull flag on this 6 hour chart that is trying to play out right now as it's breaking through the falling trendline as I type this update.  The MACD's hit the zero area and are turning back up too, but on the 60 minute and 2 hour chart (not shown) the MACD's have risen from oversold (around -2.5) to about zero now on the 60 and -1.0 on the 2 hour chart.  So, while the 6 hour chart looks to be hooking back up these shorter time frame charts may need to rollover soon near this zero line and make a higher low (just needs to stay above the prior -2.5 area) to setup positive divergence for another day.  When I add in the lagging short term 60 minute chart of the SPX cash index I see it oversold as well but no turn back up yet.  The longer term view of the same chart shows MACD's still very overbought up near +4.0/+5.0 area from a peak of +6.0 back in early October.  So while the short term MACD's are still pointing down (in the -2.5 area) with no signs yet of turning up this tells me that today we should see fighting charts where the futures want to go up but the cash wants to go down.  And that leads to the rollovers of the MACD's on the futures around the zero line for the shorter term 60 minute and 2 hour charts.

Again though I expect a higher low if this happens to setup positive divergence.  As for the actual price level of the futures that's a hard one to call.  If the charts were all flipped I'd say we'd make a higher high as the market always favors the bulls, but since this suggests a lower low in the price levels of the futures with a higher low on the MACD's I'm not sure we'll see it today as the FED's cheat and hold the market up all the time and don't let the bearish setups play out like the bullish ones.  We hit support yesterday on that move down and I expect it to hold today.  So if the bulls are smart they will allow the MACD's to rollover near the zero line and setup that positive divergence for tomorrow.  But if they are not smart (and let's face it, they are very dumb animals that can't hunt for food themselves and have to be feed daily by farmer Janet... LOL) they will keep charging on upwards all day today and push those MACD's above zero to the point of exhaustion where they are sure to setup a larger drop Friday or Monday that will take out the current support low yesterday.

It would be much smarter to rollover today and go test that low and maybe pierce it by a point or so to setup the positive divergence, but my gut tells me they won't do that and will just keep running hard at full speed all day but not getting too far, but instead just trending water (aka... sideways action).  I've seen this rodeo before and the bulls rarely do what is logical.  They will push and push until they are fully exhausted and then the next move down the bears are going to kick them in the teeth on it.  It all spells trouble for the bulls I think as the best I could see them doing by forcing a continued move up today would be to double top or slightly higher high by Friday, whereas if they would drop back and do that positive divergence they could tag 2600 and beyond... but I just don't think they will play that card today.

My thoughts are that they will stretch the MACD's well above that zero line into Friday where it will setup a move down on Monday/Tuesday that will take out the current low yesterday and make it a distant memory.  Bulls will play this wrong today, I just feel it, and it will haunt them next week when the next drop could have been small but will end up being a much larger I believe.  Anyway, for today I expect chop as charts fight each other.  Just keep your eyes on the MACD of the 60 minute chart as if they push it to +2.5 area today (or thereabouts) instead of rolling over then the bulls are playing the dumb card as I expect them to do.