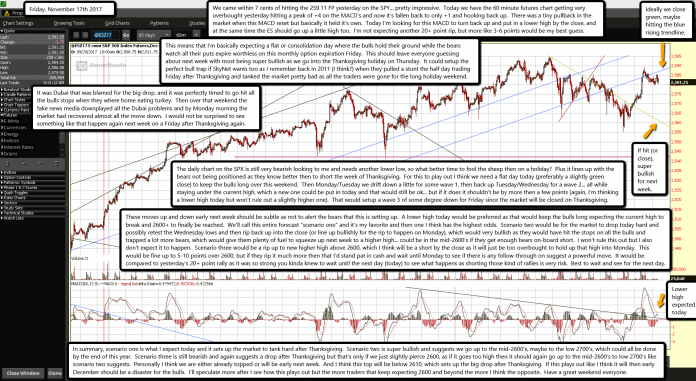 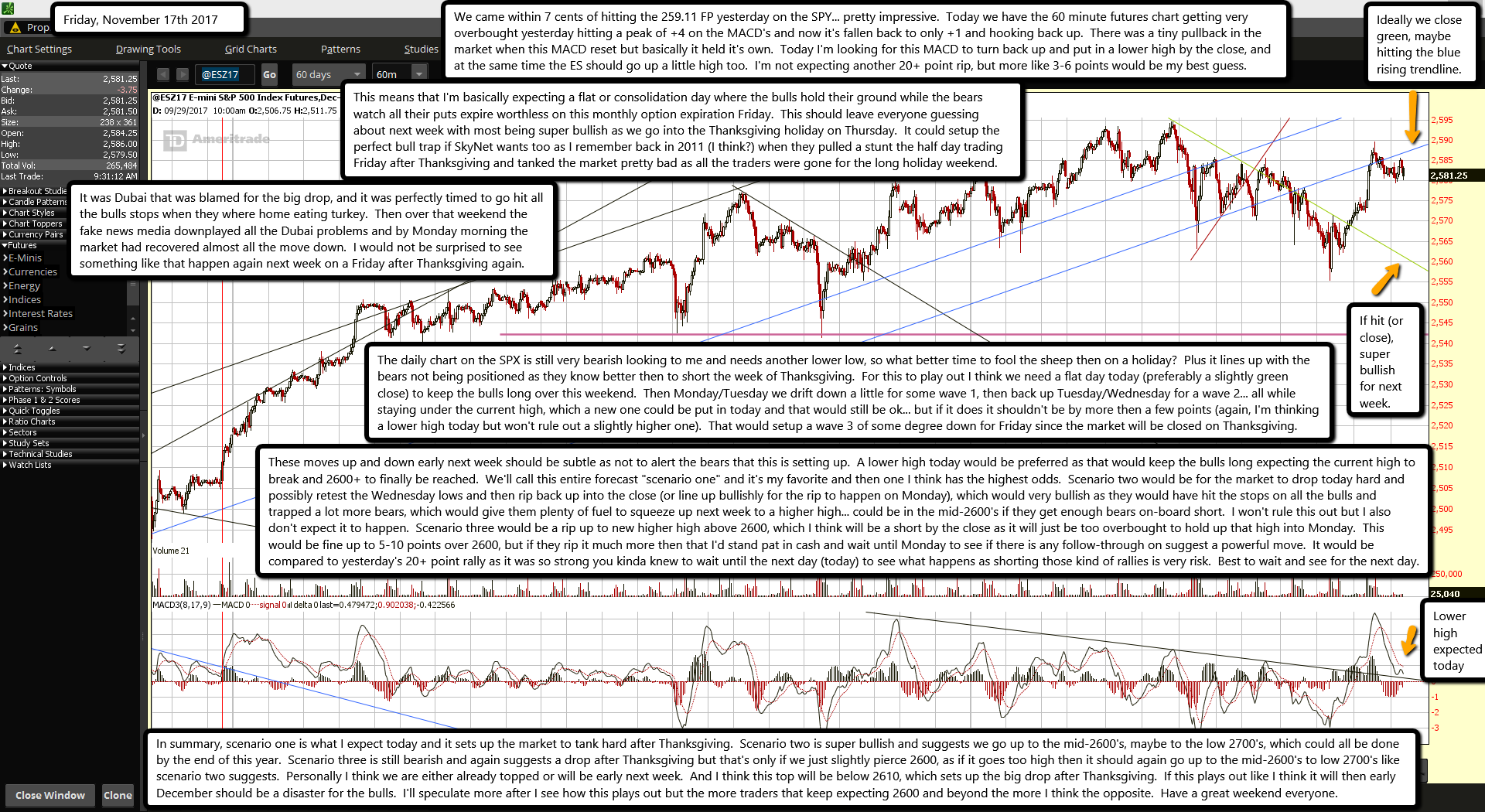 We came within 7 cents of hitting the 259.11 FP yesterday on the SPY... pretty impressive.  Today we have the 60 minute futures chart getting very overbought yesterday hitting a peak of +4 on the MACD's and now it's fallen back to only +1 and hooking back up.  There was a tiny pullback in the market when this MACD reset but basically it held it's own.  Today I'm looking for this MACD to turn back up and put in a lower high by the close, and at the same time the ES should go up a little high too.  I'm not expecting another 20+ point rip, but more like 3-6 points would be my best guess.

This means that I'm basically expecting a flat or consolidation day where the bulls hold their ground while the bears watch all their puts expire worthless on this monthly option expiration Friday.  This should leave everyone guessing about next week with most being super bullish as we go into the Thanksgiving holiday on Thursday.  It could setup the perfect bull trap if SkyNet wants too as I remember back in 2011 (I think?) when they pulled a stunt the half day trading Friday after Thanksgiving and tanked the market pretty bad as all the traders were gone for the long holiday weekend.

It was Dubai that was blamed for the big drop, and it was perfectly timed to go hit all the bulls stops when they where home eating turkey.  Then over that weekend the fake news media downplayed all the Dubai problems and by Monday morning the market had recovered almost all the move down.  I would not be surprised to see something like that happen again next week on a Friday after Thanksgiving again.

The daily chart on the SPX is still very bearish looking to me and needs another lower low, so what better time to fool the sheep then on a holiday?  Plus it lines up with the bears not being positioned as they know better then to short the week of Thanksgiving.  For this to play out I think we need a flat day today (preferably a slightly green close) to keep the bulls long over this weekend.  Then Monday/Tuesday we drift down a little for some wave 1, then back up Tuesday/Wednesday for a wave 2... all while staying under the current high, which a new one could be put in today and that would still be ok... but if it does it shouldn't be by more then a few points (again, I'm thinking a lower high today but won't rule out a slightly higher one).  That would setup a wave 3 of some degree down for Friday since the market will be closed on Thanksgiving.

These moves up and down early next week should be subtle as not to alert the bears that this is setting up.  A lower high today would be preferred as that would keep the bulls long expecting the current high to break and 2600+ to finally be reached.  We'll call this entire forecast "scenario one" and it's my favorite and then one I think has the highest odds.  Scenario two would be for the market to drop today hard and possibly retest the Wednesday lows and then rip back up into the close (or line up bullishly for the rip to happen on Monday), which would very bullish as they would have hit the stops on all the bulls and trapped a lot more bears, which would give them plenty of fuel to squeeze up next week to a higher high... could be in the mid-2600's if they get enough bears on-board short.  I won't rule this out but I also don't expect it to happen.  Scenario three would be a rip up to new higher high above 2600, which I think will be a short by the close as it will just be too overbought to hold up that high into Monday.  This would be fine up to 5-10 points over 2600, but if they rip it much more then that I'd stand pat in cash and wait until Monday to see if there is any follow-through on suggest a powerful move.  It would be compared to yesterday's 20+ point rally as it was so strong you kinda knew to wait until the next day (today) to see what happens as shorting those kind of rallies is very risk.  Best to wait and see for the next day.

In summary, scenario one is what I expect today and it sets up the market to tank hard after Thanksgiving.  Scenario two is super bullish and suggests we go up to the mid-2600's, maybe to the low 2700's, which could all be done by the end of this year.  Scenario three is still bearish and again suggests a drop after Thanksgiving but that's only if we just slightly pierce 2600, as if it goes too high then it should again go up to the mid-2600's to low 2700's like scenario two suggests.  Personally I think we are either already topped or will be early next week.  And I think this top will be below 2610, which sets up the big drop after Thanksgiving.  If this plays out like I think it will then early December should be a disaster for the bulls.  I'll speculate more after I see how this plays out but the more traders that keep expecting 2600 and beyond the more I think the opposite.  Have a great weekend everyone.