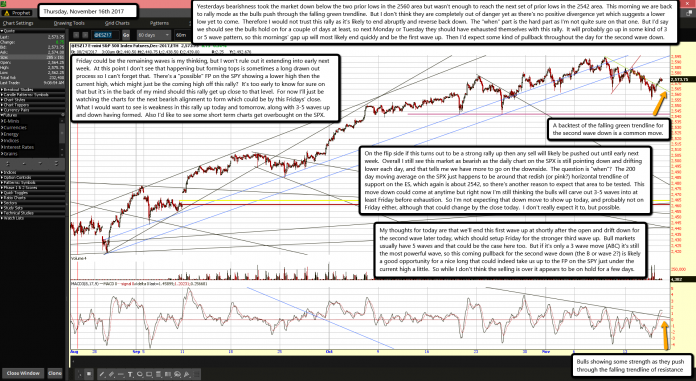 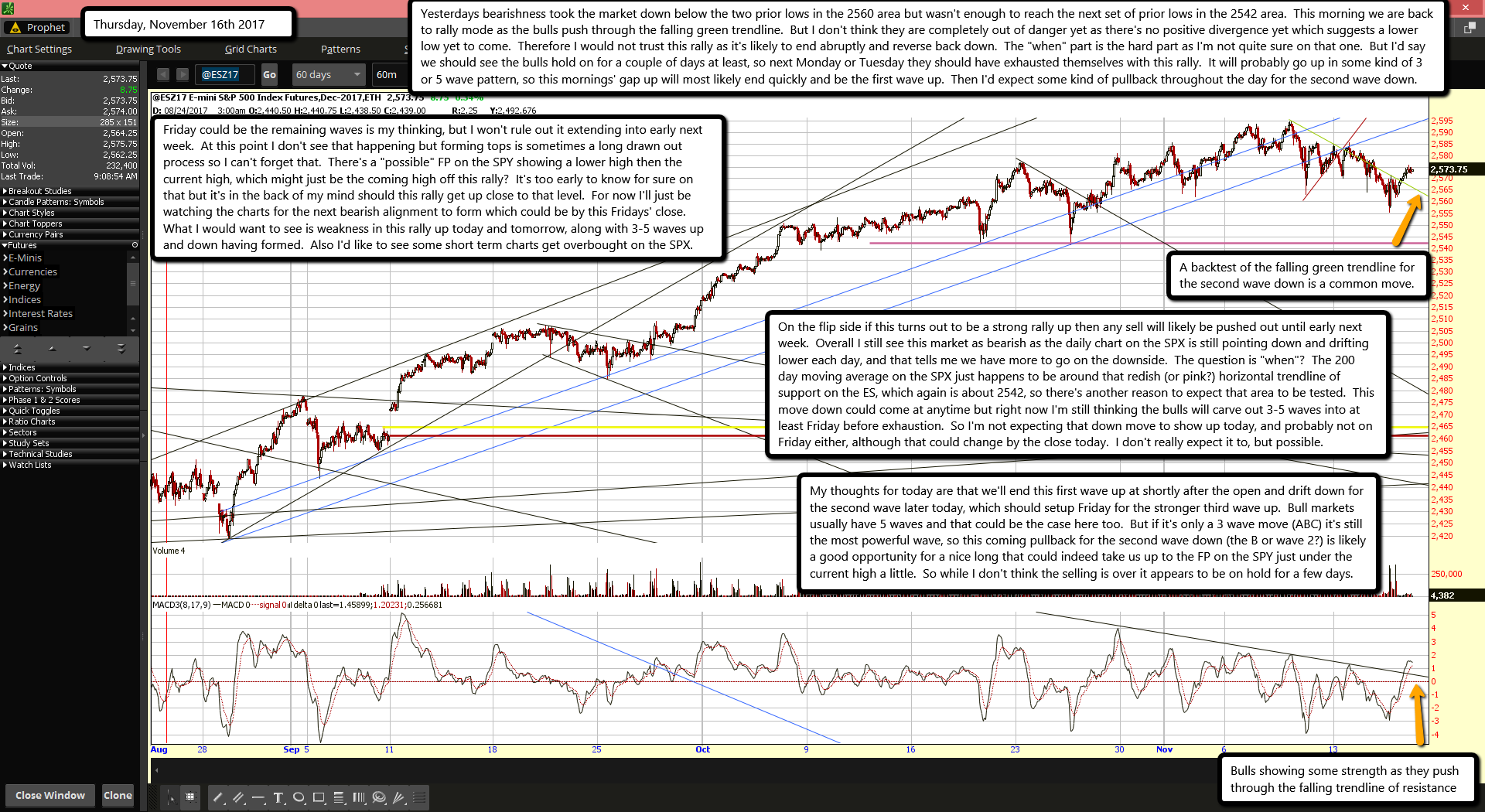 Yesterdays bearishness took the market down below the two prior lows in the 2560 area but wasn't enough to reach the next set of prior lows in the 2542 area.  This morning we are back to rally mode as the bulls push through the falling green trendline.  But I don't think they are completely out of danger yet as there's no positive divergence yet which suggests a lower low yet to come.  Therefore I would not trust this rally as it's likely to end abruptly and reverse back down.  The "when" part is the hard part as I'm not quite sure on that one.  But I'd say we should see the bulls hold on for a couple of days at least, so next Monday or Tuesday they should have exhausted themselves with this rally.  It will probably go up in some kind of 3 or 5 wave pattern, so this mornings' gap up will most likely end quickly and be the first wave up.  Then I'd expect some kind of pullback throughout the day for the second wave down.

Friday could be the remaining waves is my thinking, but I won't rule out it extending into early next week.  At this point I don't see that happening but forming tops is sometimes a long drawn out process so I can't forget that.  There's a "possible" FP on the SPY showing a lower high then the current high, which might just be the coming high off this rally?  It's too early to know for sure on that but it's in the back of my mind should this rally get up close to that level.  For now I'll just be watching the charts for the next bearish alignment to form which could be by this Fridays' close.  What I would want to see is weakness in this rally up today and tomorrow, along with 3-5 waves up and down having formed.  Also I'd like to see some short term charts get overbought on the SPX.

On the flip side if this turns out to be a strong rally up then any sell will likely be pushed out until early next week.  Overall I still see this market as bearish as the daily chart on the SPX is still pointing down and drifting lower each day, and that tells me we have more to go on the downside.  The question is "when"?  The 200 day moving average on the SPX just happens to be around that redish (or pink?) horizontal trendline of support on the ES, which again is about 2542, so there's another reason to expect that area to be tested.  This move down could come at anytime but right now I'm still thinking the bulls will carve out 3-5 waves into at least Friday before exhaustion.  So I'm not expecting that down move to show up today, and probably not on Friday either, although that could change by the close today.  I don't really expect it to, but possible.

My thoughts for today are that we'll end this first wave up at shortly after the open and drift down for the second wave later today, which should setup Friday for the stronger third wave up.  Bull markets usually have 5 waves and that could be the case here too.  But if it's only a 3 wave move (ABC) it's still the most powerful wave, so this coming pullback for the second wave down (the B or wave 2?) is likely a good opportunity for a nice long that could indeed take us up to the FP on the SPY just under the current high a little.  So while I don't think the selling is over it appears to be on hold for a few days.