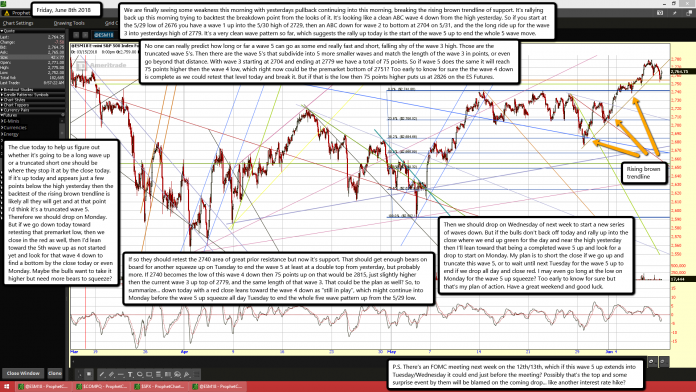 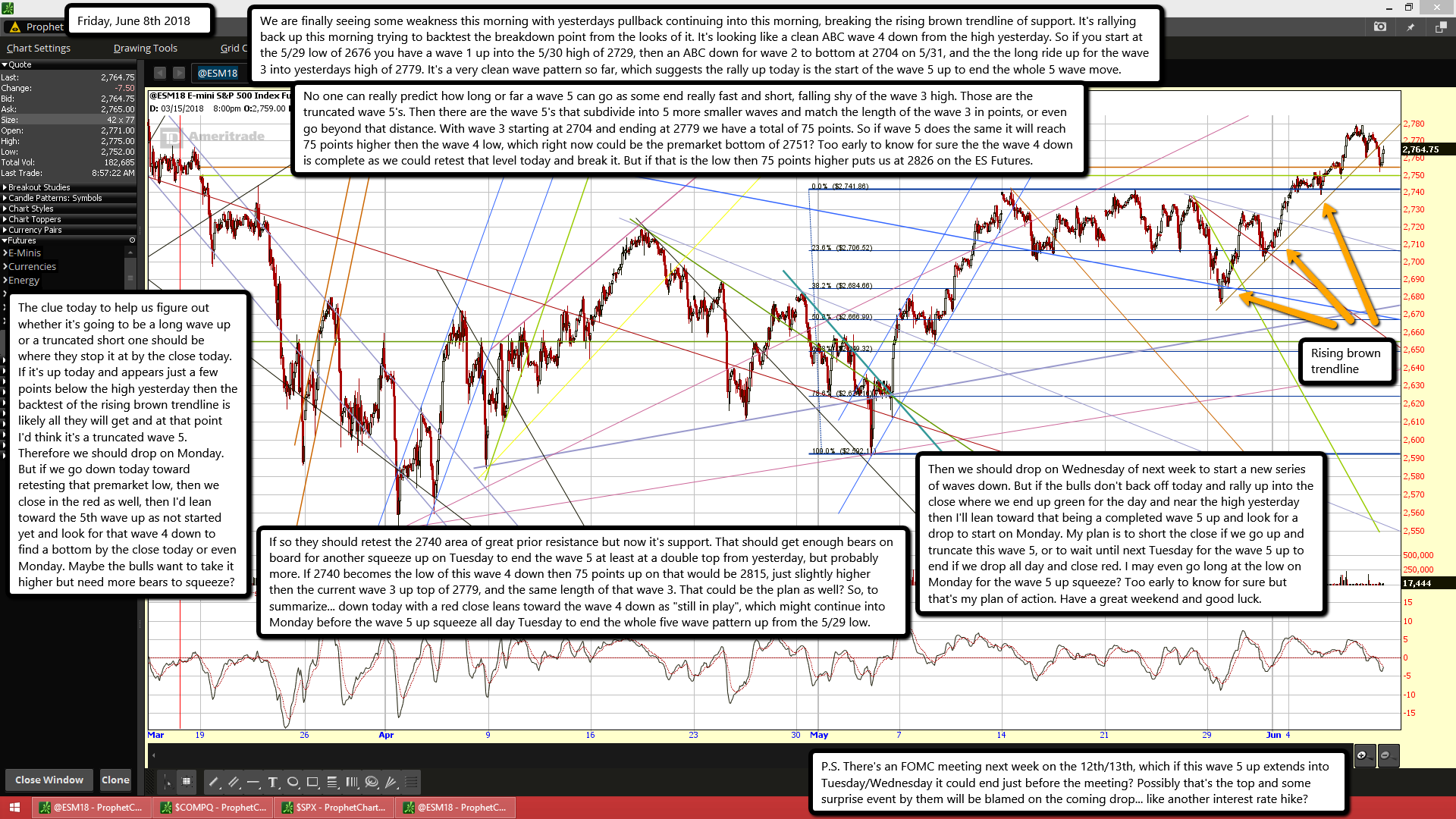 We are finally seeing some weakness this morning with yesterdays pullback continuing into this morning, breaking the rising brown trendline of support. It's rallying back up this morning trying to backtest the breakdown point from the looks of it. It's looking like a clean ABC wave 4 down from the high yesterday. So if you start at the 5/29 low of 2676 you have a wave 1 up into the 5/30 high of 2729, then an ABC down for wave 2 to bottom at 2704 on 5/31, and the the long ride up for the wave 3 into yesterdays high of 2779. It's a very clean wave pattern so far, which suggests the rally up today is the start of the wave 5 up to end the whole 5 wave move.

No one can really predict how long or far a wave 5 can go as some end really fast and short, falling shy of the wave 3 high. Those are the truncated wave 5's. Then there are the wave 5's that subdivide into 5 more smaller waves and match the length of the wave 3 in points, or even go beyond that distance. With wave 3 starting at 2704 and ending at 2779 we have a total of 75 points. So if wave 5 does the same it will reach 75 points higher then the wave 4 low, which right now could be the premarket bottom of 2751? Too early to know for sure the the wave 4 down is complete as we could retest that level today and break it. But if that is the low then 75 points higher puts us at 2826 on the ES Futures.

The clue today to help us figure out whether it's going to be a long wave up or a truncated short one should be where they stop it at by the close today. If it's up today and appears just a few points below the high yesterday then the backtest of the rising brown trendline is likely all they will get and at that point I'd think it's a truncated wave 5. Therefore we should drop on Monday. But if we go down today toward retesting that premarket low, then we close in the red as well, then I'd lean toward the 5th wave up as not started yet and look for that wave 4 down to find a bottom by the close today or even Monday. Maybe the bulls want to take it higher but need more bears to squeeze?

If so they should retest the 2740 area of great prior resistance but now it's support. That should get enough bears on board for another squeeze up on Tuesday to end the wave 5 at least at a double top from yesterday, but probably more. If 2740 becomes the low of this wave 4 down then 75 points up on that would be 2815, just slightly higher then the current wave 3 up top of 2779, and the same length of that wave 3. That could be the plan as well? So, to summarize... down today with a red close leans toward the wave 4 down as "still in play", which might continue into Monday before the wave 5 up squeeze all day Tuesday to end the whole five wave pattern up from the 5/29 low.

Then we should drop on Wednesday of next week to start a new series of waves down. But if the bulls don't back off today and rally up into the close where we end up green for the day and near the high yesterday then I'll lean toward that being a completed wave 5 up and look for a drop to start on Monday. My plan is to short the close if we go up and truncate this wave 5, or to wait until next Tuesday for the wave 5 up to end if we drop all day and close red. I may even go long at the low on Monday for the wave 5 up squeeze? Too early to know for sure but that's my plan of action. Have a great weekend and good luck.

P.S. There's an FOMC meeting next week on the 12th/13th, which if this wave 5 up extends into Tuesday/Wednesday it could end just before the meeting? Possibly that's the top and some surprise event by them will be blamed on the coming drop... like another interest rate hike?