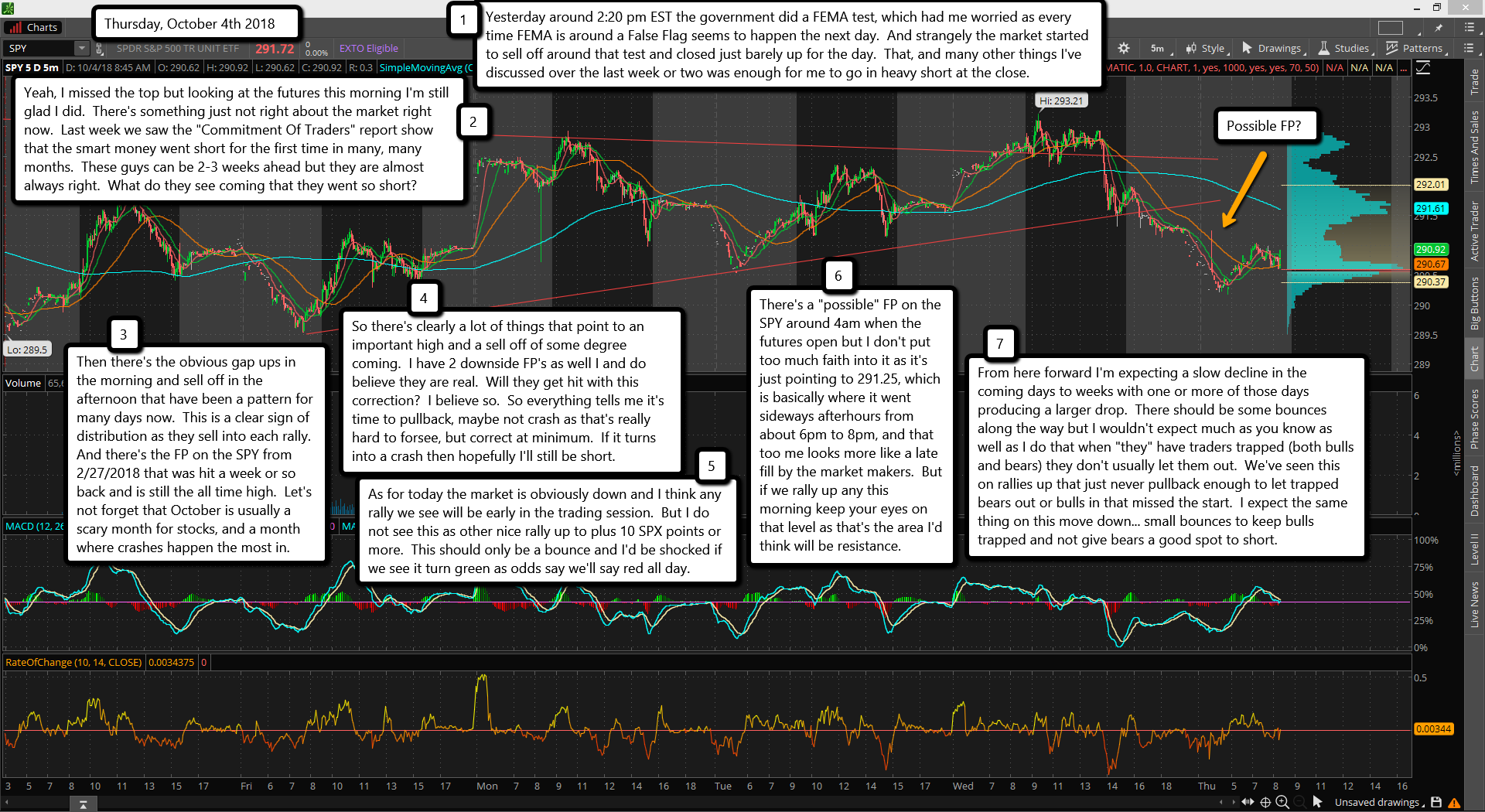 Yesterday around 2:20 pm EST the government did a FEMA test, which had me worried as every time FEMA is around a False Flag seems to happen the next day.  And strangely the market started to sell off around that test and closed just barely up for the day.  That, and many other things I've discussed over the last week or two was enough for me to go in heavy short at the close.

Yeah, I missed the top but looking at the futures this morning I'm still glad I did.  There's something just not right about the market right now.  Last week we saw the "Commitment Of Traders" report show that the smart money went short for the first time in many, many months.  These guys can be 2-3 weeks ahead but they are almost always right.  What do they see coming that they went so short?

Then there's the obvious gap ups in the morning and sell off in the afternoon that have been a pattern for many days now.  This is a clear sign of distribution as they sell into each rally.  And there's the FP on the SPY from 2/27/2018 that was hit a week or so back and is still the all time high.  Let's not forget that October is usually a scary month for stocks, and a month where crashes happen the most in.

So there's clearly a lot of things that point to an important high and a sell off of some degree coming.  I have 2 downside FP's as well I and do believe they are real.  Will they get hit with this correction?  I believe so.  So everything tells me it's time to pullback, maybe not crash as that's really hard to forsee, but correct at minimum.  If it turns into a crash then hopefully I'll still be short.

As for today the market is obviously down and I think any rally we see will be early in the trading session.  But I do not see this as other nice rally up to plus 10 SPX points or more.  This should only be a bounce and I'd be shocked if we see it turn green as odds say we'll say red all day.

There's a "possible" FP on the SPY around 4am when the futures open but I don't put too much faith into it as it's just pointing to 291.25, which is basically where it went sideways afterhours from about 6pm to 8pm, and that too me looks more like a late fill by the market makers.  But if we rally up any this morning keep your eyes on that level as that's the area I'd think will be resistance.

From here forward I'm expecting a slow decline in the coming days to weeks with one or more of those days producing a larger drop.  There should be some bounces along the way but I wouldn't expect much as you know as well as I do that when "they" have traders trapped (both bulls and bears) they don't usually let them out.  We've seen this on rallies up that just never pullback enough to let trapped bears out or bulls in that missed the start.  I expect the same thing on this move down... small bounces to keep bulls trapped and not give bears a good spot to short.