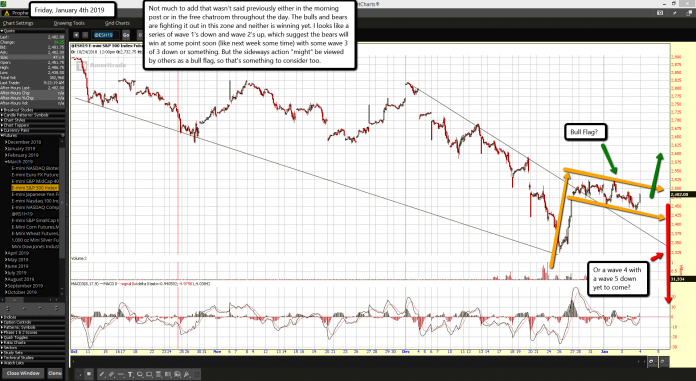 Not much to add that wasn't said previously either in the morning post or in the free chatroom throughout the day. The bulls and bears are fighting it out in this zone and neither is winning yet. I looks like a series of wave 1's down and wave 2's up, which suggest the bears will win at some point soon (like next week some time) with some wave 3 of 3 down or something. But the sideways action "might" be viewed by others as a bull flag, so that's something to consider too.

The bottom line here as that one could make a case for the bulls just as easily as the bears. The monthly, weekly and daily charts are all still very bearish but the daily is still very oversold and trying to come up from that extreme low. The 60 minute chart became overbought on the MACD's a few days ago, which is likely why the market is struggling in this area. But the MACD's are still very oversold coming up from about -30 to just above -20 right now.

The Full Stochastic's have dropped from +80 to under +20 right now. They suggest a short term bounce (which we see in the futures this morning). My thoughts are that we need to see that Full Stochastic go back up to at least +70 and the MACD's to reach the -10 to -15 zone all while the Histogram stays positive but makes a low high to setup negative divergence.

This could take several more days I think but if that happens and the market doesn't breakout of the current sideways trading zone then the bears will have a perfect setup for another nasty drop. Time frame would be late next week for that to happen. If it did then I'd like to see a lower low in the price of the SPX but higher lows on the MACD's to setup positive divergence afterwards. Then I'd think the bottom would be in for awhile (several months) and the bulls could squeeze the bears into Spring/Summer for a lower high then the all time high last September. 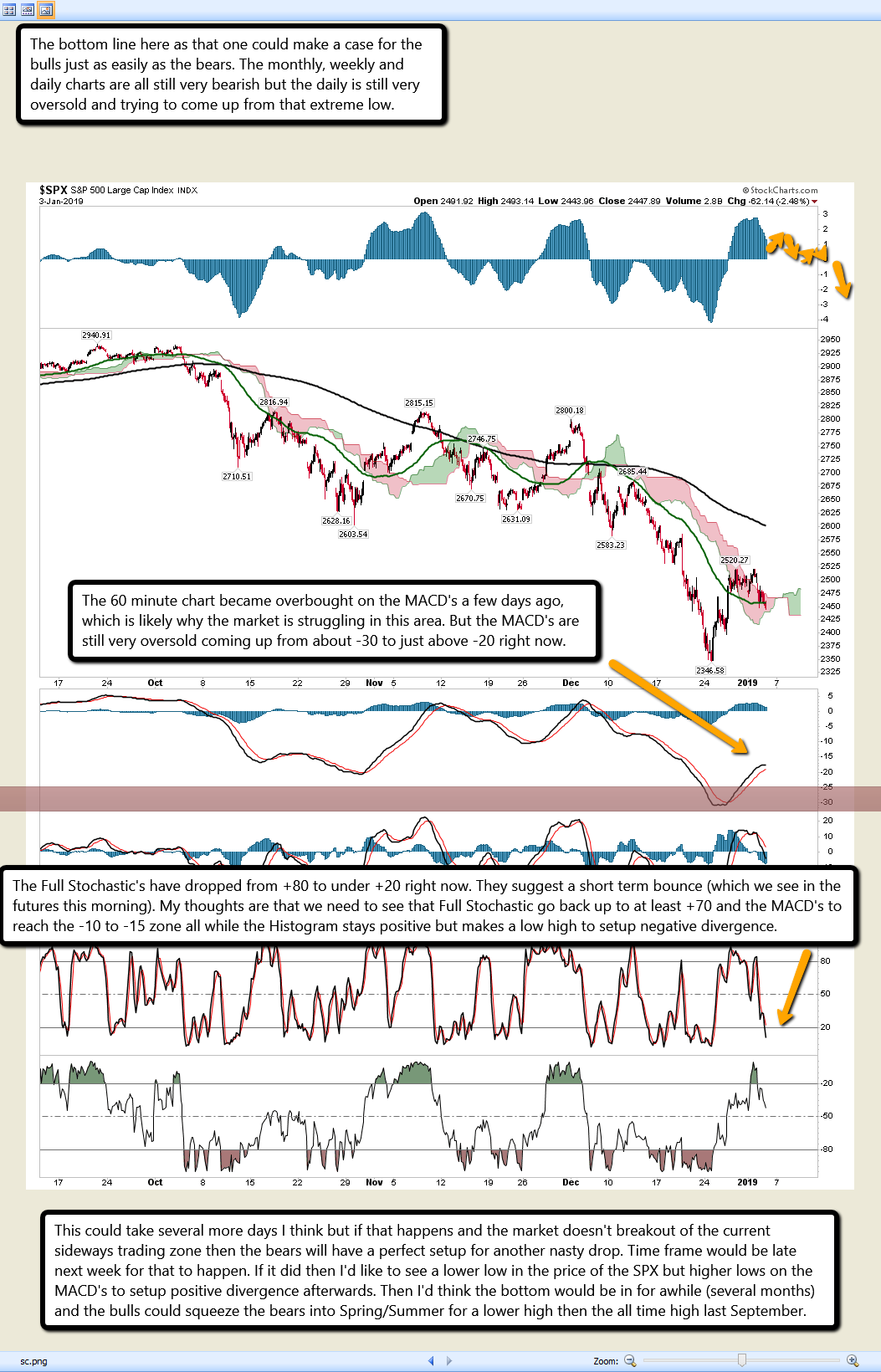 The other scenario that might happen is that the bulls decide that they don't want to give the bears another lower low to setup that positive divergence and a multi-month rally, so they instead snort some crack to give them enough energy to ram it up hard the next few days into the 2550-2600 zone (a C wave up), which will of course exhaust them big time and cause worst damage later on when the bears take it back down even harder. This in my opinion would be very bearish as then I could see a multi-month down move... like into March or so before it bottoms.

If the bulls do this move (which would look like an ABC up from the lows) they are asking for more pain in the near future. They would be wise to continue to chop sideways another few days and let the bears take it down for a slightly lower low so positive divergence will form and then they can have a multi-month rally to have fun with. We should know in a few days which scenario is likely going to play out.

If we stay under the recent prior highs (around 2520-2525) then I'll be looking for that drop to start late next week to make a slightly lower low. It would then be called a 5th wave down (of a larger C wave down) and end the first larger ABC down from the all time high of 2940 SPX last September. Next would be a multi-month ABC up into Spring/Summer. I believe this is how it's going to play out but I won't know for sure until next week. Have a great weekend.