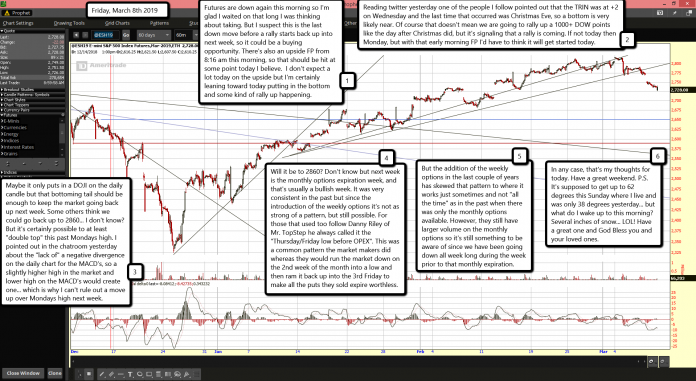 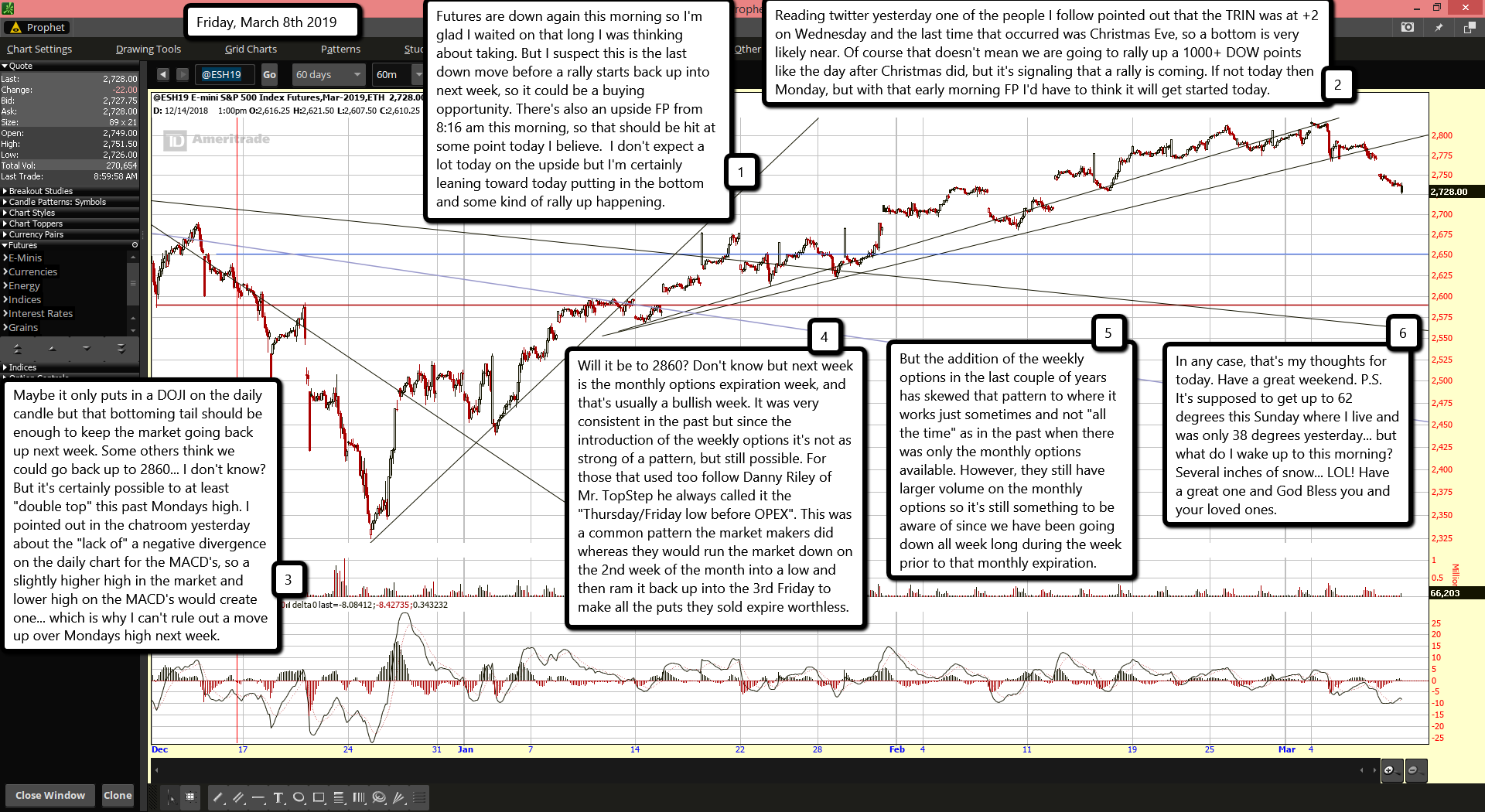 Futures are down again this morning so I'm glad I waited on that long I was thinking about taking. But I suspect this is the last down move before a rally starts back up into next week, so it could be a buying opportunity. There's also an upside FP from 8:16 am this morning, so that should be hit at some point today I believe.  I don't expect a lot today on the upside but I'm certainly leaning toward today putting in the bottom and some kind of rally up happening.

Reading twitter yesterday one of the people I follow pointed out that the TRIN was at +2 on Wednesday and the last time that occurred was Christmas Eve, so a bottom is very likely near. Of course that doesn't mean we are going to rally up a 1000+ DOW points like the day after Christmas did, but it's signaling that a rally is coming. If not today then Monday, but with that early morning FP I'd have to think it will get started today.

Maybe it only puts in a DOJI on the daily candle but that bottoming tail should be enough to keep the market going back up next week. Some others think we could go back up to 2860... I don't know? But it's certainly possible to at least "double top" this past Mondays high. I pointed out in the chatroom yesterday about the "lack of" a negative divergence on the daily chart for the MACD's, so a slightly higher high in the market and lower high on the MACD's would create one... which is why I can't rule out a move up over Mondays high next week.

Will it be to 2860? Don't know but next week is the monthly options expiration week, and that's usually a bullish week. It was very consistent in the past but since the introduction of the weekly options it's not as strong of a pattern, but still possible. For those that used too follow Danny Riley of Mr. TopStep he always called it the "Thursday/Friday low before OPEX". This was a common pattern the market makers did whereas they would run the market down on the 2nd week of the month into a low and then ram it back up into the 3rd Friday to make all the puts they sold expire worthless.

But the addition of the weekly options in the last couple of years has skewed that pattern to where it works just sometimes and not "all the time" as in the past when there was only the monthly options available. However, they still have larger volume on the monthly options so it's still something to be aware of since we have been going down all week long during the week prior to that monthly expiration.

In any case, that's my thoughts for today. Have a great weekend. P.S. It's supposed to get up to 62 degrees this Sunday where I live and was only 38 degrees yesterday... but what do I wake up to this morning? Several inches of snow... LOL! Have a great one and God Bless you and your loved ones.