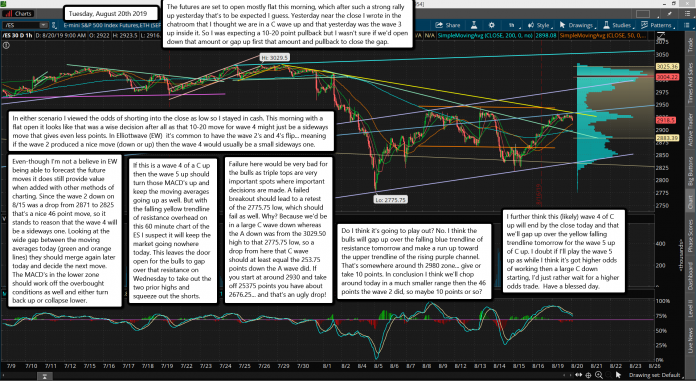 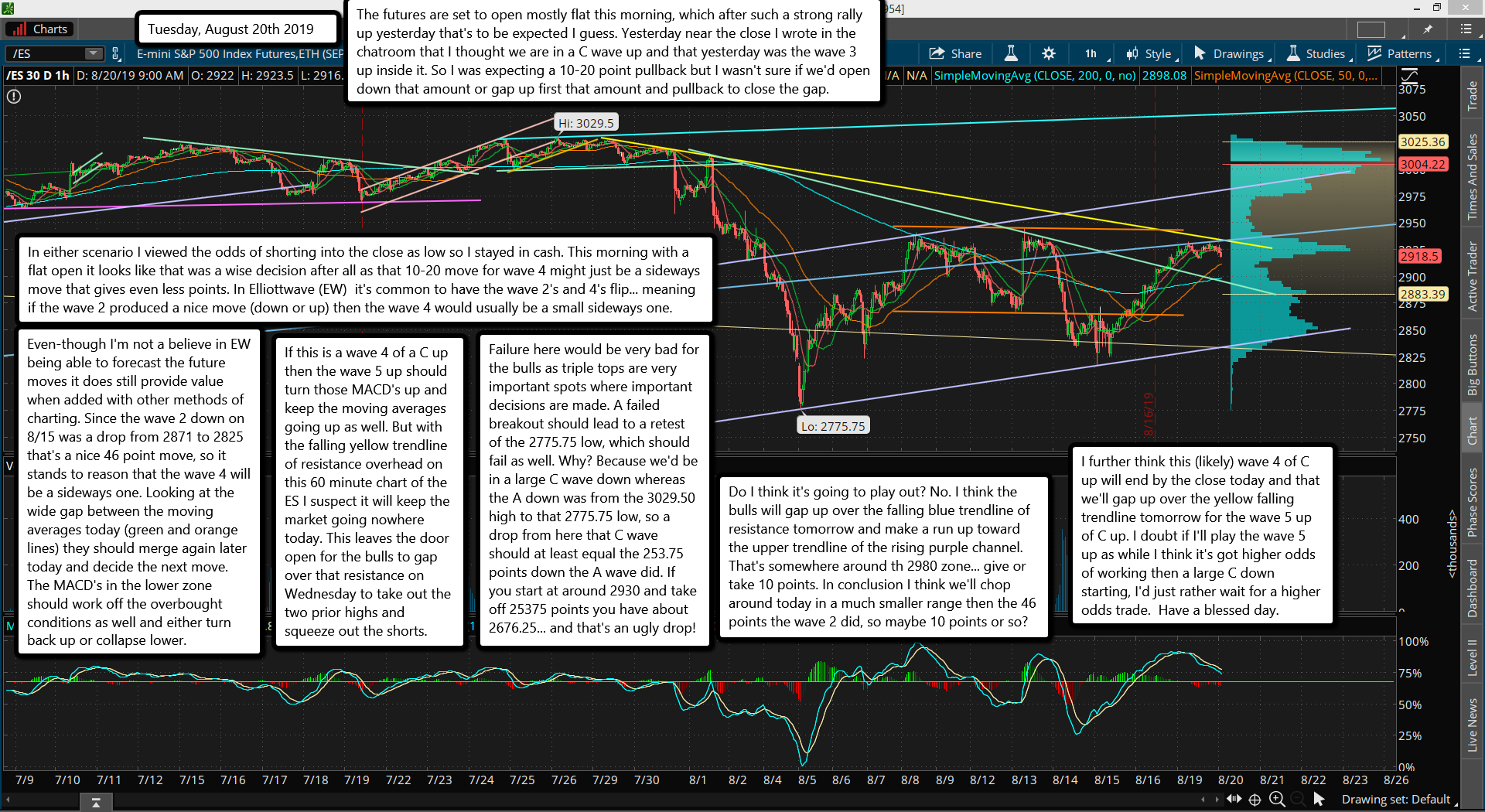 The futures are set to open mostly flat this morning, which after such a strong rally up yesterday that's to be expected I guess. Yesterday near the close I wrote in the chatroom that I thought we are in a C wave up and that yesterday was the wave 3 up inside it. So I was expecting a 10-20 point pullback but I wasn't sure if we'd open down that amount or gap up first that amount and pullback to close the gap.

In either scenario I viewed the odds of shorting into the close as low so I stayed in cash. This morning with a flat open it looks like that was a wise decision after all as that 10-20 move for wave 4 might just be a sideways move that gives even less points. In Elliottwave (EW)  it's common to have the wave 2's and 4's flip... meaning if the wave 2 produced a nice move (down or up) then the wave 4 would usually be a small sideways one.

Even-though I'm not a believe in EW being able to forecast the future moves it does still provide value when added with other methods of charting. Since the wave 2 down on 8/15 was a drop from 2871 to 2825 that's a nice 46 point move, so it stands to reason that the wave 4 will be a sideways one. Looking at the wide gap between the moving averages today (green and orange lines) they should merge again later today and decide the next move. The MACD's in the lower zone should work off the overbought conditions as well and either turn back up or collapse lower.

If this is a wave 4 of a C up then the wave 5 up should turn those MACD's up and keep the moving averages going up as well. But with the falling yellow trendline of resistance overhead on this 60 minute chart of the ES I suspect it will keep the market going nowhere today. This leaves the door open for the bulls to gap over that resistance on Wednesday to take out the two prior highs and squeeze out the shorts.

Failure here would be very bad for the bulls as triple tops are very important spots where important decisions are made. A failed breakout should lead to a retest of the 2775.75 low, which should fail as well. Why? Because we'd be in a large C wave down whereas the A down was from the 3029.50 high to that 2775.75 low, so a drop from here that C wave should at least equal the 253.75 points down the A wave did. If you start at around 2930 and take off 25375 points you have about 2676.25... and that's an ugly drop!

Do I think it's going to play out? No. I think the bulls will gap up over the falling blue trendline of resistance tomorrow and make a run up toward the upper trendline of the rising purple channel. That's somewhere around th 2980 zone... give or take 10 points. In conclusion I think we'll chop around today in a much smaller range then the 46 points the wave 2 did, so maybe 10 points or so?

I further think this (likely) wave 4 of C up will end by the close today and that we'll gap up over the yellow falling trendline tomorrow for the wave 5 up of C up. I doubt if I'll play the wave 5 up as while I think it's got higher odds of working then a large C down starting, I'd just rather wait for a higher odds trade.  Have a blessed day.