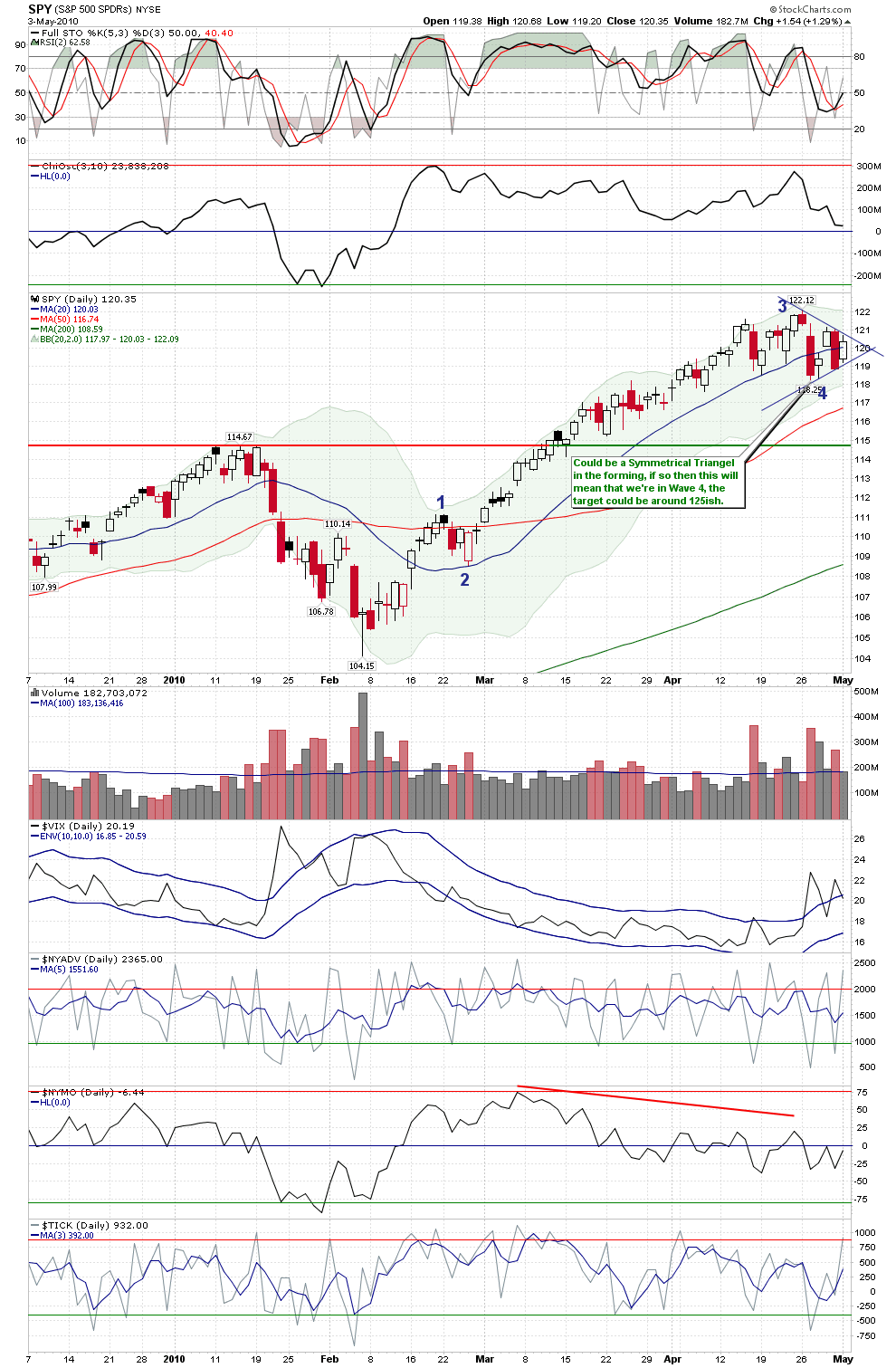 Well, it seems that small bounce up wasn't good enough for the bulls, as they rallied back well above 50% of Friday's sell off.  Those bulls are pesky and irritating creatures... to say the least.  But, I knew that it was possible that they'd rally it back up, as the charts were showing that the market was oversold on a short term basis.

However, today they ended overbought.  So, I do believe we will sell off some tomorrow.  I'm not looking for anything major, as I think everyone is waiting on the job's reports on this Friday.  That should be a big market mover.  Of course between now and then, any news out of Greece or some other event, could spook the market first... and let the selling begin.

One thing of interest today, on both the 60 minute and the 15 minute charts, was how the market couldn't get above this downward sloping trendline.  It is clearly putting pressure on it, and if the market wants to go above it, then a gap open over top of the trendline, is going to be required.

It's the same trendline shown in this chart below (found on Cobra's blog).  Problem is, there is also a lower trendline that is supporting the market, and preventing further selling.  This is looking like a symmetrical triangle (credit goes to Cobra for spotting it, as I didn't), which still has another day or 2 of room to trade in, before it reaches the apex, and must jump out. 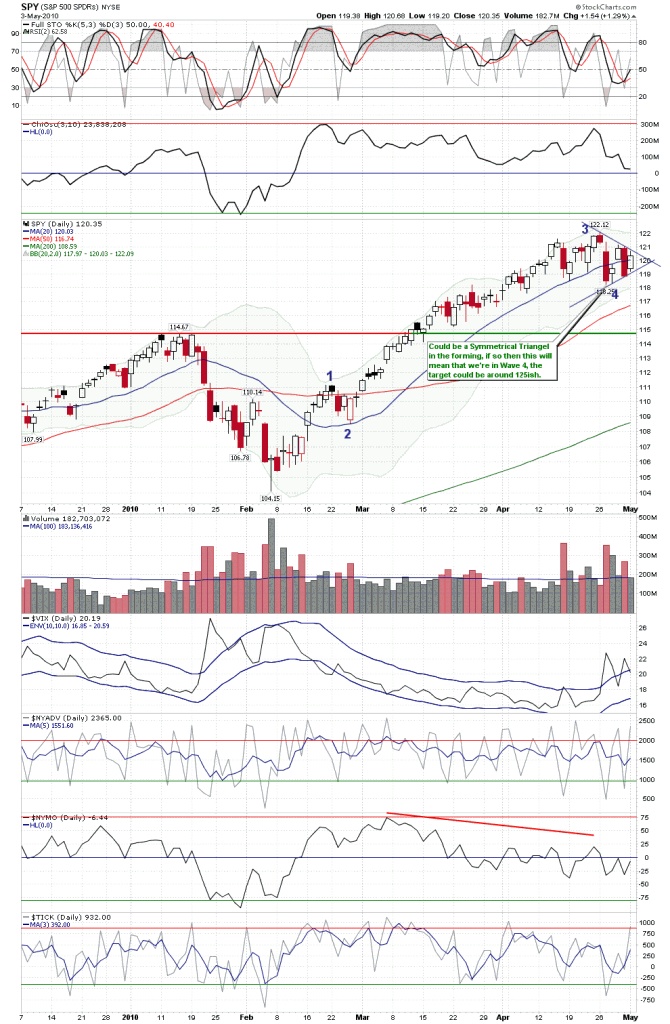 All the other charts are still signaling that the market will pull back, but unless we get some bad news event to cause the selling, we are waiting for Friday to produce it... and that's only if the jobs data is bad.  You know how the government likes to erase some of the digits on the report.  It's just like giving the report card of the students grades, to the student first, and telling him to give it to his parents.  Funny how easy it is to turn those "F's" into "A's"...  So as much as I'd like to tell you that all the charts are pointing down, the chart above could go either way.

We are also now 3 weeks away from this months' option expiration, and although the market sentiment is still extremely bullish, the amount of puts purchased versus calls, for the month of May, is way too heavy on the put side. 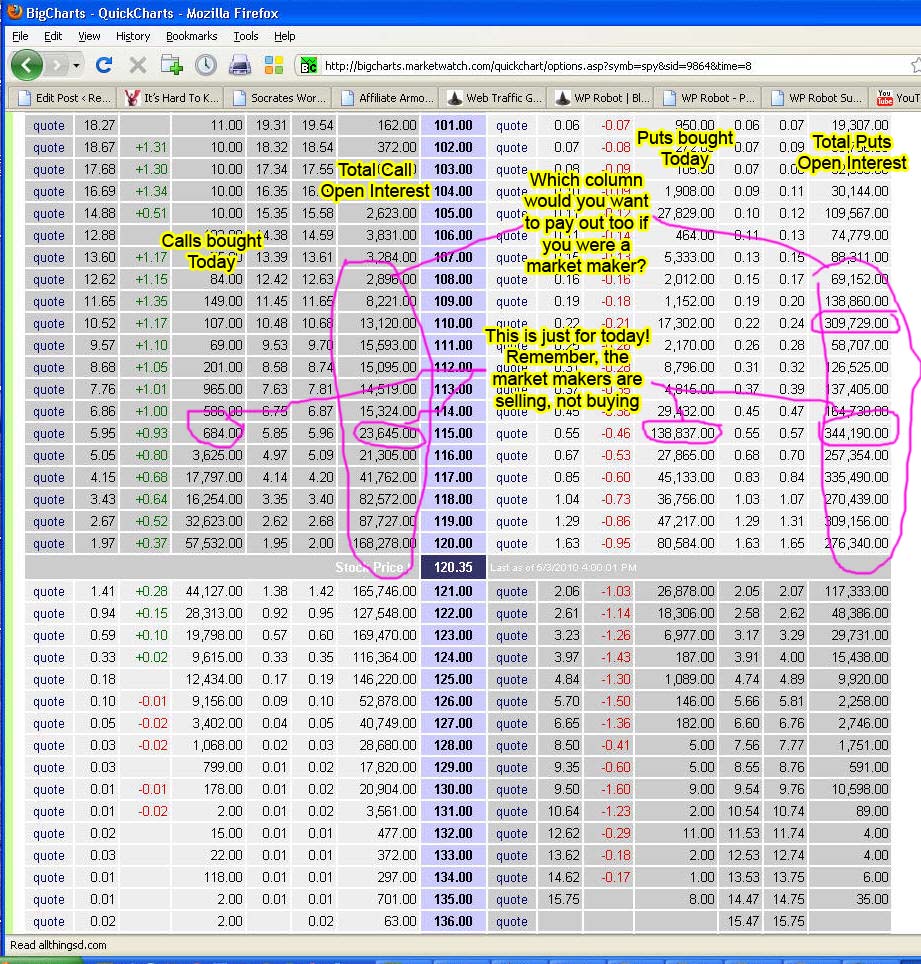 That doesn't mean we can't sell off this week, and rally back hard into opx, but the chance of the market crashing into opx is very slim.  Those market makers are not going to pay out on all those puts.  I've seen it too many times, how they sell tons of puts to the retail trader, and then rally the market, making them expire worthless.

Of course after opx is another story, but for now, the bears have really only got this week too get a sell off to happen.  The week of opx, and most of the week prior to opx is already reserved for the bulls I'm afraid...