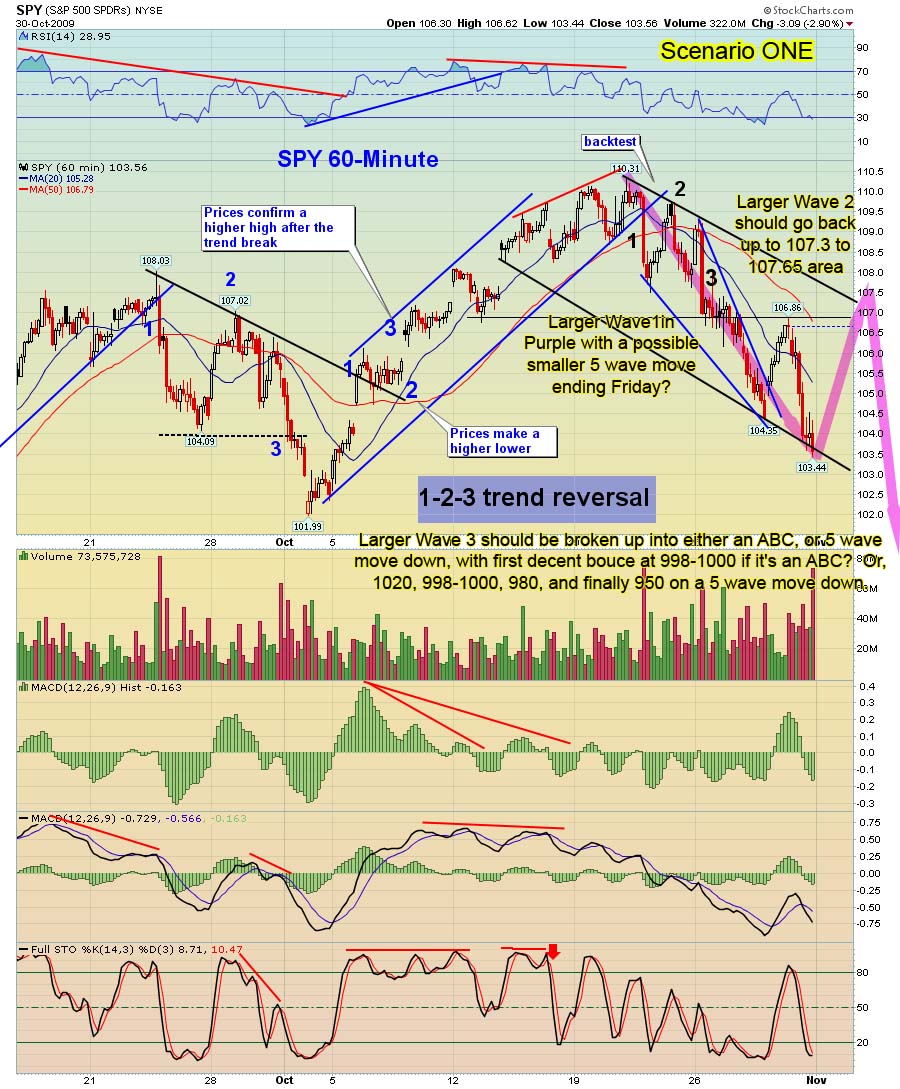 OK... so what's the plan for next week?  Well, I was off on my Thursday forecast, as I expected a flat day on Friday and Monday.  I guess you can't be right a 100% of time?  The volume was 325 million on the spy.  That means a down day of course... and what did we have?  I huge down day!  Fortunately, I wasn't in any position... short or long.  So, no harm done I guess.  I hope all of you weren't long either.

Note:  All charts are from "The Chart Patten Trader".  You can find the link to his site, and his charts on my blog list to the right of this website.  Hopefully he doesn't mine me borrowing his chart.  I just added my thoughts in purple, and the black text with yellow background around them. 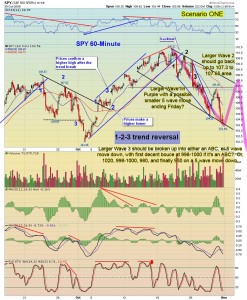 If we bust on through then the next level of support is 998-1000.  There is an 80% chance of a decent bounce there, and I will be looking to go long at that level.  I'm just not sure if we bust through 1020, as it is also the lower trend line of what could be a "head and shoulders" formation forming, with the left side low at 1020 on the first of the October.

Now, if 1020 holds, then I'm still expecting 1073-1076 area to be about the highest possible retracement level on the way back up.  There is a gap from 12th-13th at about 107.60  to 108.35 (spy).  I believe we will get close to it, but not fill it.  Much like the way the market would gap up in the past, and not fill the gaps on any correction down.  I think we will now start a series of gap downs and not fill the gaps on the retracements back up.  The reverse of what happened from the March lows to the current high of 1102 spx.

I remember how many times I waited for a gap fill to happen on any corrective move down in the past, only to be disappointed when the market stopped just shy of it, and started rallying back up.  The markets likes to tease people... especially those that follow technical analysis.  The old trick... bring in close, then snatch it away from them!

Everyone was looking for 1120 to be the top, and it fell just short of it at 1102.  The same may happen on the way back up.  Many will expect 1080 to be hit, and they will be waiting to go short at that level.  All the more reason not to get back up to that point. 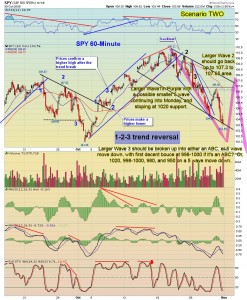 This one has us rallying on Monday from the current level.  Which, could also run up to the same level around 1073-1076 spx in a few days.  Notice how that area would break the upper downward sloping channel line on the chart above.  How many times have you seen a channel that gets broken out of... only to fall back in it again?  It's another way the market likes to trick you into going long, and then reversing in the other direction.

I'm not an elliottwave expert, but I do know that the wave 2 back up should be higher then the top of the smaller wave 4 at 106.86.  Since Monday's are usually light volume days, then a rally seems to have the best chance of happening on that day.  Once started, short covering would come in a push the market back up on Tuesday.  Many people will put their stops at the 104.35 low... which could be easily hit if Monday has light volume.

Then, the 106.86 would also have lots of stops there waiting to be taken out my the market makers.  That could be enough to push us up again to just under the 1080 area.  In the past, there would have been a whole lot of bears that shorted the market, and any short covering rally would have really pushed the market much higher.  However, I believe that many bears missed this correction down.  So, that means that there isn't a whole lot of them in the market to "short squeeze".  Hence the reason that I don't really see us reaching the 1080 level... only close to it.

Withthat being said, I do believe that whatever level we retrace back up to, the bears are going to all pile on and drive this market down in a big wave 3 move.  With this scenario, 1020 won't hold but maybe intraday, and the next level down at 998-1000 will be hit.

This means that Monday is a "wildcard" day, as it could complete a smaller 5 wave move down, or it could just continue the 5th wave until 1020 is hit.  So, how do we play this move... that is the big question?

OK, if scenario one is what happens, then I will wait for 1020 to be hit, and then go long for the move up to at least 1060 again, but I'm expecting that 1073-1076 area.  I'll just be very cautious at 1060, as it could dump again there?  Any long position should only be deep in the money calls, or spreads, as time value and volility will kill your option value on the way up.

As I said early, I'm not an expert in elliottwave.  I believe they have their place, but unfortunately they can't accurately predict the next move... only tell you possible moves.  That's why I focus on major support levels, and volume in the market.  Bounces occur at the support levels, which makes the EW ABC and 12345 wave counts.  Anyway, let's move on to one more possible scenario. 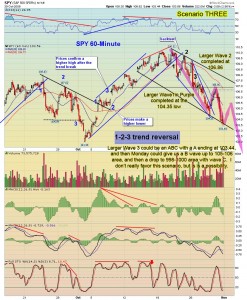