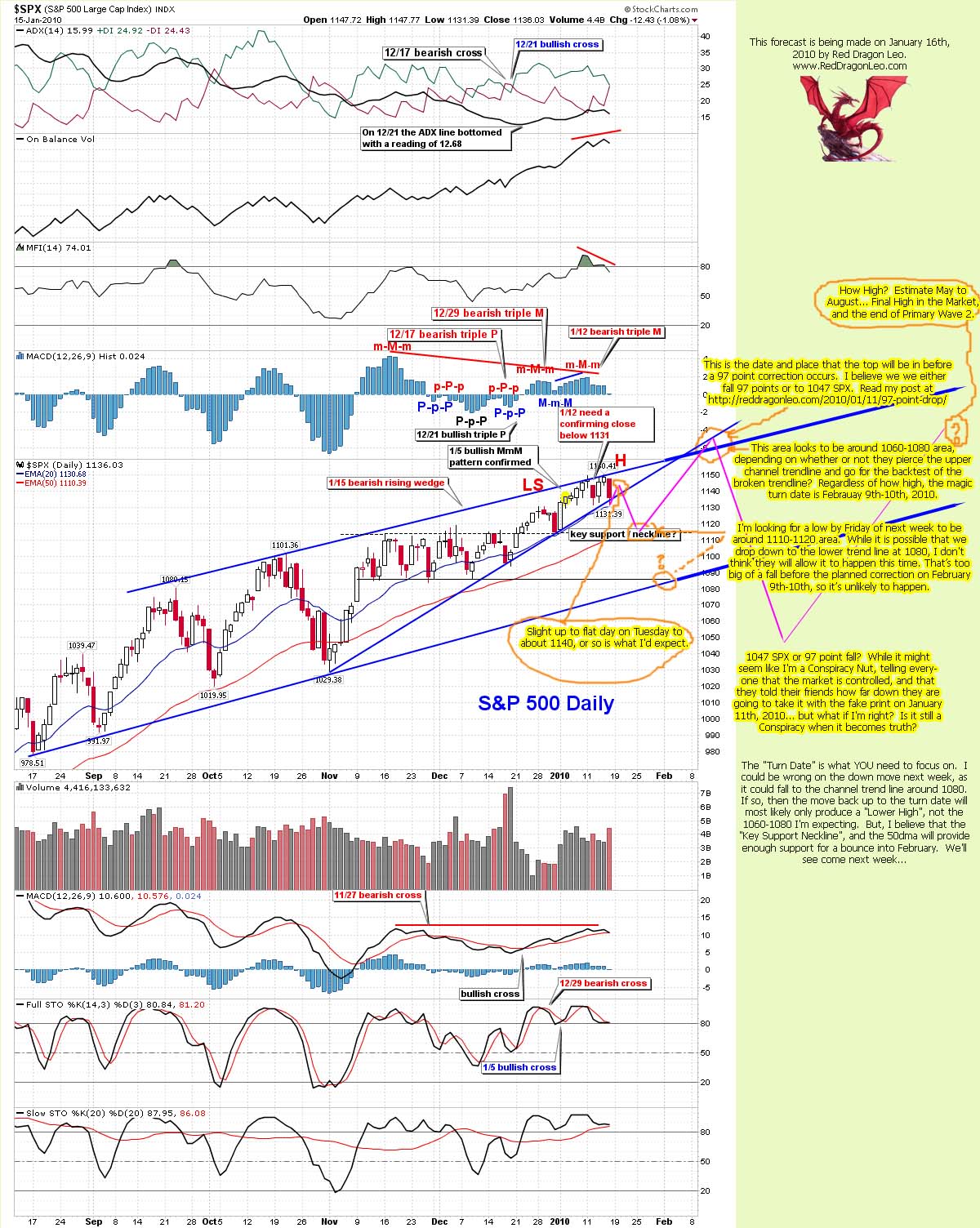 This weekend update is going to be a "KEEPER", as you should bookmark it and re-read it in about a month from now.  Also, you should save the charts posted here.  I'm going out a limb here by posting a "Turn Date" and stating how much I expect it to fall, but I've never been afraid to speak up when I have something important to say... so why stop now?   The chart below states what I'm expecting to happen over the next few weeks.  Study it hard! 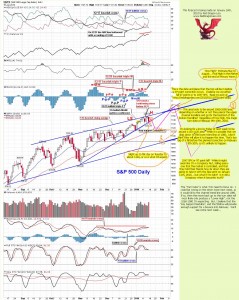 I'm expecting a flat to slightly up day on Tuesday (Market's closed on Monday for Holiday).  I'd say the intraday high could be around 114.00 SPY level.  The market could close up or just flat on Tuesday, but after the close and throughout the rest of the week, there is a lot of important earnings out.

I expect the market to view the numbers as bad, and sell off into the end of the week.  The first target down is at 112.30 SPY, which is the horizontal support line at about 1115 SPX level.  This is where the market should bounce.  After that, there is the 50 day moving average coming in around 111.00 (daily chart), and a gap fill at 111.40 SPY (60 minute chart) that should provide good support for the down move coming.  That's about 1103 SPX for the gap fill (60 minute chart). 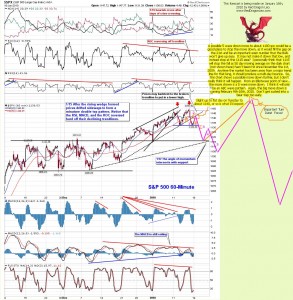 The chart above shows a possible 5 wave down move to about 1100 spx would be a good place to stop the move down, as it would fill the gap on the 21st and be an important even number that the Bulls won't give up easy.  It may not make it down that low, and instead stop at the 1115 area?  I personally think that 1115 will stop the fall as 50 day moving average on the daily chart (not shown on the chart above) hasn’t been hit since November the 1st, 2009.  Anytime the market has been away from a major trend line for that long, it should produce a multi-day bounce.  So, this chart shows a possible move down further, but I don’t really think it will happen.  From an Elliottwave point of view... the move shown is a 5 wave move down.  I think it will only be an ABC wave pattern.  Again, the big move down is coming February 9th-10th, 2010.  Don’t get sucked into a bear trap too early.

Moving on to a longer term I've posted another chart below that shows you where I'm expecting the market to go this year.  I believe the move from the March 6th, 2009 low of 666 to the final high of 1250-1300 will end the Primary Wave 2 Bear Market Rally with a 5 wave pattern completing it.  It’s hard to say when the exact high will occur, or how high it will go... but the down move has already been planned for mid-September. 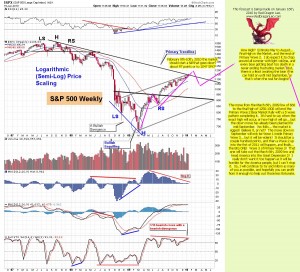 Yes folks... the market is rigged!  Believe it, or not?  The move down in September will only be Wave 1 inside Primary Wave 3... but it will be violent!  It should be a couple hundred points, and then a Wave 2 up into the first of 2011 will happen, and finally... the BIG ONE!  Wave 3 of Primary Wave 3!  That one will take out the March 6th, 2009 low and head America into the Great Depression 2!

I really don’t want it too happen as it will be horrible for the America people, but I can’t stop it.  So, I will continue to try and inform as many of you as possible, and hopefully you can profit from it enough to help out those less fortunate.  This is a special post and hopefully it will give you some help in planning your trading, not get caught long in February.

Of course I could be wrong, and if I am I'll gladly admit it... and not hide behind a lot of double talk like some people do.  I'm clearly stating that I expect the market to go down next week, then up until February 9th-10th.  Then a large move down that will either go 97 points down, or down to 1047 SPX?  Which one... I don't know?  It doesn't matter right now, as the most important thing is to get yourself positioned short before it starts.

I'll jump off that ship before it sinks, and on to the next ride up when I'm finally on it...