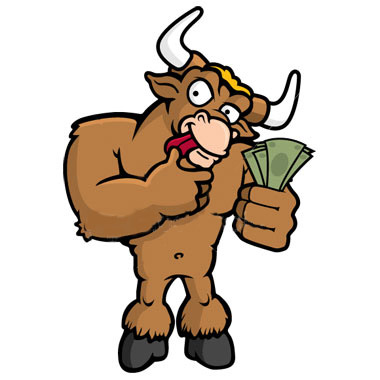 Looks like the Bulls blew past the Bears like they were standing still today!  A bomb was set off outside of a JP Morgan office in Greece.  No one was hurt, but I'm sure some important records about anything to do with Greece, were burnt up in the explosion.  After all, how else can you cover up all the illegal deals you did with Greece?  It's the America way of course.  I guess the market seen the news as positive, so the rally continued.

Unless some major news event happens, I'd expect tomorrow to be a pause day before moving higher to the 110.34 spy level.  The 108.00 level is the current pain for this Friday, so it could slowly drift on back down to that level by then.  That's the best way too screw the bulls and bears both, so that would be my best guess as to what should happen the rest of the week.

I have too admit, this has been a big disappoint for me, as I totally missed this move up, and got caught short as well.  The daily charts are looking bullish now, and the 60 minute chart is a little overbought, but it still could run a little higher.  The bulls are back in control of the tape now, as the light volume clearly dictates that.

During the large down move, volume was well over 200 million, and even over 400 million on day.  Today was only about 150 million, which is the same as it's always been during this bear market rally from the March 2009 low.  Light volume usually means an up market, as the big institutions are waiting for higher levels to start selling again.  Where, and when is the question I can't answer.

Not much else to add.