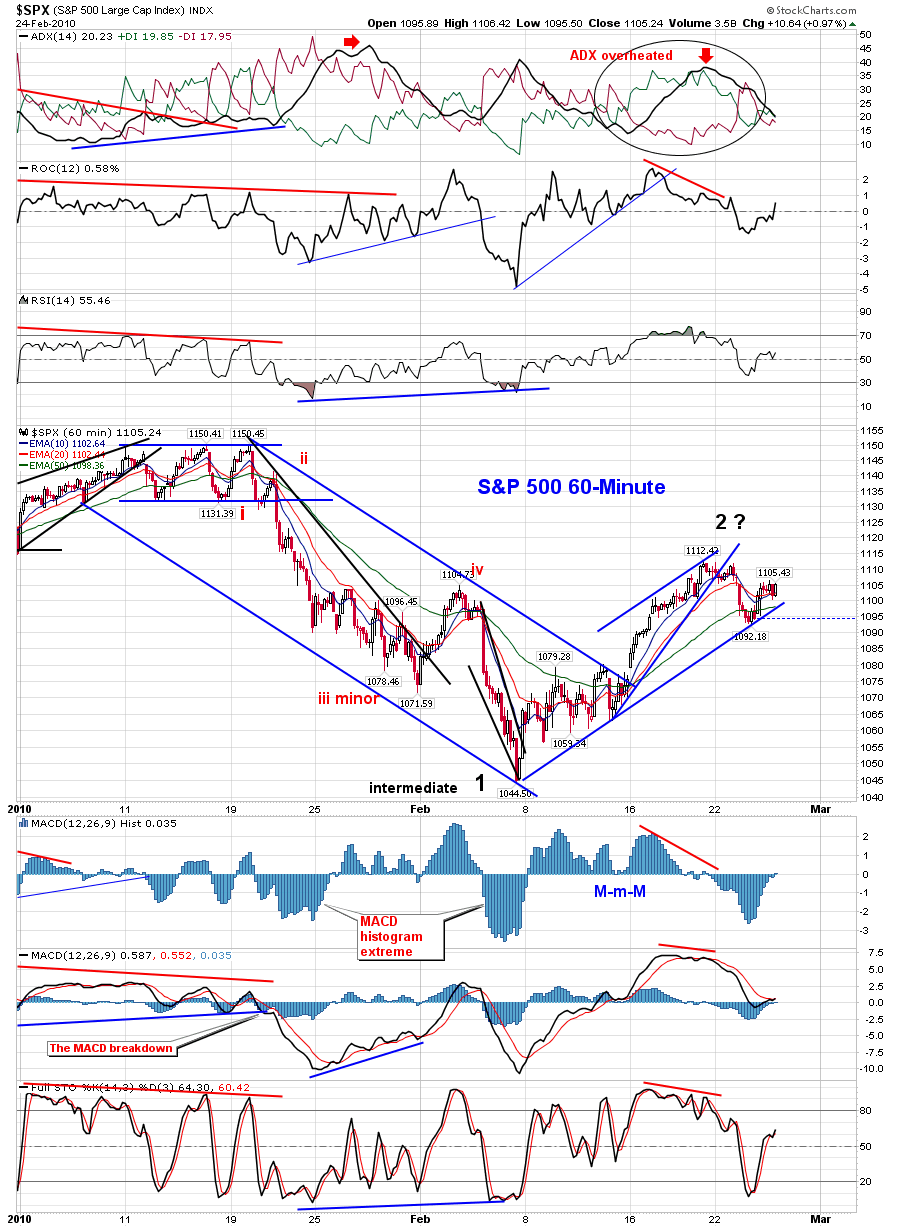 Some wild swings in the morning, and then some sideways chop until the close...  but we're still in the rising channel on the 60 minute chart below.  I didn't think the move down yesterday was going to stick, as the volume was just too light.  The 1092 level that held yesterday, will move up tomorrow to about 1097 on the lower trend line on the rising channel.  Will it hold again tomorrow?  As long as the volume stays low, then the answer is most likely YES. 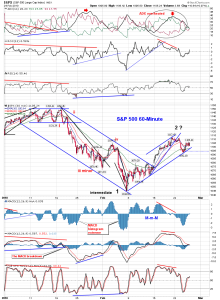 Today's volume was only about 175 million on the SPY.  That's just too light for any sell off to happen.  The markets are still being held up for now.  My feeling on tomorrow is that they already know that the Initial Claims and Continuing Claims numbers are worst then expected.  So, how do you keep the market from selling off huge on the numbers?  You release other bad news like the Consumer Confidence numbers, and New Home Sales 2 days ahead of that.

The expectations will be lowered in the minds of the traders, so when the numbers are released, it won't have as big an impact.  Smart crooks, these Fed's are...  You have to give them credit for that.

Next, what I would do is to rally the dollar over night, then sell it hard at 8:30 am when the Claims numbers are released.  That should keep the market from selling off too hard.  Crooked isn't it?  Of course it is... but a year ago only 1 out 20 people asked would say that the market is manipulated.  Now, I'd bet 1 out 2 would say it is...

Clearly, without the stimulus money, the market would probably be below the March 6th, 2009 low by now.  All this manipulating is really going to hurt the economy long term.  It's like they are slowly pulling the bandaid off from the big cut or sore on your body... pulling one hair at a time.  It would be a whole lot less painful to just jerk it off quickly and be done with it.  Sheesh... every parent knows that.

But, I guess we don't have adults running the government... we have children.  They cry when things don't go their way, throw temper tantrums, and fight among each other.  Yep... sounds like to children too me!

Looking at the chart above again, I'd say we could chop a little higher until the end of the week, as the MACD is rising up into positive territory, and the ADX line is still pointing down.  The ADX could bottom on Friday or Monday, and then start to curl back up, giving strength and momentum to whichever DI line is on top.  My thoughts are that the negative DI line will start to rise at that time, and nice little sell off would occur.

This will line up nicely with the weekly chart putting in a nice bear flag too.  Just keep in mind that during light volume periods, the market rarely sells off.  It usually goes up, or sideways.  So, I'm looking for the ADX to find a bottom and start to turn back up while the spy is also hitting major resistance level.

Hmmm, bear flag on the weekly charts, major resistance at 112.00 area, February closes out positive, new month to start next week, and maybe some bad news released over the weekend?  That sounds like the perfect setup to fool a lot of bears... and bulls too!  Will it happen?  Who knows?  I'm just throwing it out there for you to decide.