Slammed down in the morning, rallied back at noon, but rejected at the 50, and pushed back to even in the last quarter... 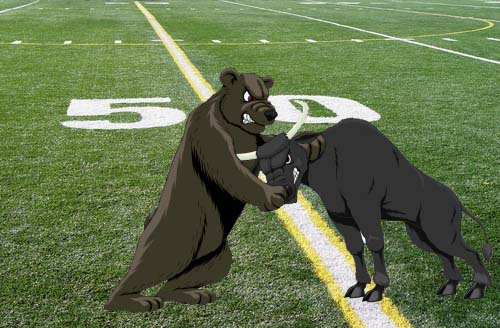 That's the story for the market today.  The gap down in the morning was more fear about the Greece issue, but the market shook it off and pushed on up higher... only to hit overhead resistance at the 50 day moving average, and get sold back off into the close.

This is not a good sign for the bulls.  It shows me that they don't have enough strength to rally higher yet.  Once again, they need to pull back and regroup before making another attempt to rally higher.  This overhead resistance at the 50 dma is soon to be double resistance, as the 20 dma moves down into it, forming a "necktie".

A necktie is simply two points (trendlines converging, or moving averages) of resistance or support that meet together at a certain point in time.  They will provide great support, or huge resistance.  In this case, they are overhead now, and will serve as huge resistance.

That doesn't mean tomorrow will be the be sell off day, only that a sell off is coming very soon... if the market can't break through the resistance overhead.  It might try to rally again tomorrow, and be rejected again.  Every time the market makes an attempt to pierce the overhead resistance, and fails... it gets weaker and weaker. 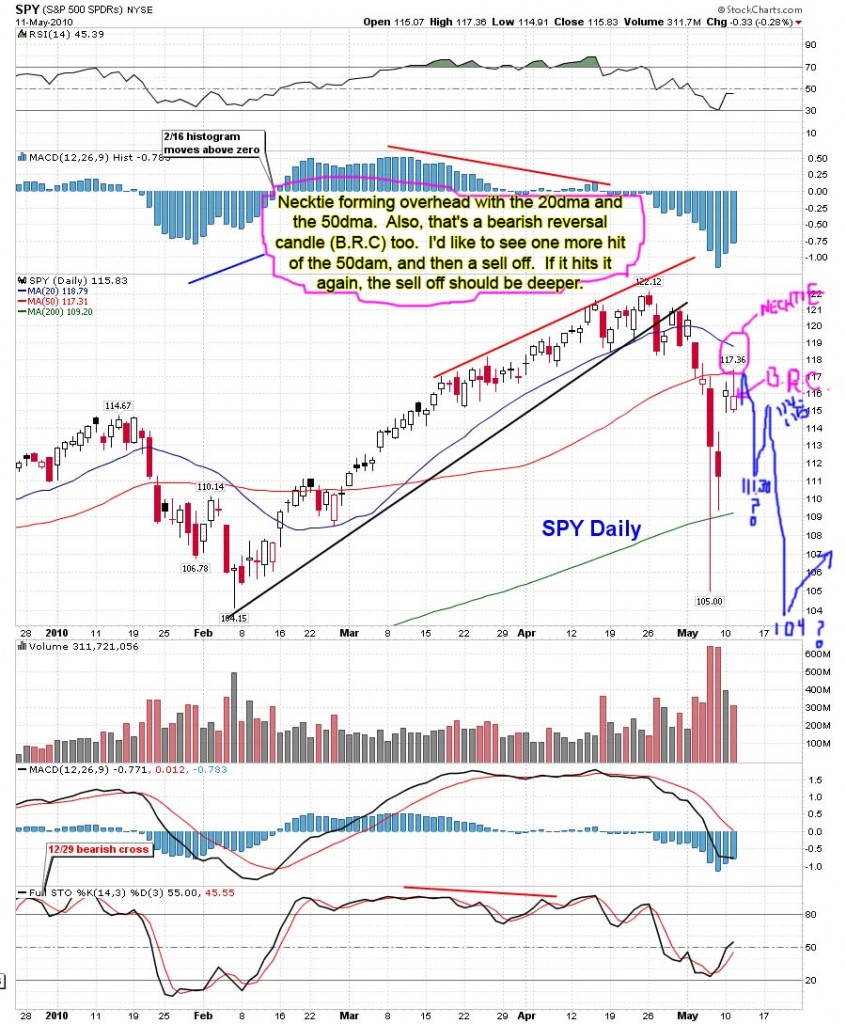 At some point, it will run out of energy and collapse back down.  Whether or not that's tomorrow or not, is anyone's guess?  I know it's coming, and I expect it to arrive this week, but I can't tell you exact date.  Since there isn't any major news or earnings this week, it could be any day this week.

Since Thursday has been bearish lately, and Friday is the last day going into an "unknown weekend", I'd give those two days the most likely days for a fall to happen.  Other then the charts telling me that we will sell off within a few days, there are other clues too.

Gold rallied hard today, even though the dollar stayed flat, and didn't sell off, as the market rose.  Usually, the dollar is selling off, while the market, gold, and oil all go up.  Oil went down today, but the market rallied up.  What is that saying to you?

It says too me that the dollar won't sell off hard because of the Greece fears... which is based on the Euro.  The Euro is still weak, and is likely to stay that way until the Greece fears go away.  That's not likely to happen overnight, regardless of the market's 400 point Dow rally on Monday.  That was just the reason behind it, but the market was very oversold, and was ready for a bounce any way.

As you can see by today's action, the euphoria of the Trillion Dollar Bailout wore off quickly by the close today.  So, the dollar isn't ready to sell off yet, and is staying strong.  OK, what about gold?  Why did it rally when the dollar didn't sell off?  Simple... FEAR!  That's why I don't trade the GLD, as it's supposed to trade opposite of the dollar, but it didn't this time because people will run too gold whenever fear is in the marketplace, regardless of what the dollar does.

Putting all these pieces together, and you have lots of reasons for the market to fall down again hard.  I would love to see another touch of the 50 dma before the sell off, as that makes for a larger drop.  The market wants to hit the 50 dma at least a couple of times, before giving up and retreating lower.  If it falls tomorrow, it won't go downs as far, as it will want one more attempt at touching the 50 dma line.

Think of it like a football player hitting a blocker that he can't get through.  He will likely try several times to push past the blocker, before he falls back and thinks of another strategy.  The market is no different.  Many attempts will be made while "at the line of defense", and finally a retreat back or a push through will occur.

If we start to fall tomorrow, I do expect the gap at 111 spy to be filled before another attempt at the 50 dma is made again.  It might happen in one day or several days?  Regardless, I do still see another leg down, to retest the 105.00 low at least.

After that, then I could see another rally to a possibly higher high in the market.  I don't know if it will happen on June the 25th, as I forecasted in weekend video.  I'd be shocked if the forecast is accurate, but for now it's still possible to follow that path of a new high by late June.

So, for tomorrow... I'm bearish, but not sure if the fall comes on Wednesday, or waits until Thursday and Friday?  Either day, I'm comfortable be short right now.

P.S. I'll be gone all day on Wednesday gang, and won't be able to reply to any posts (no computer access).  So, I leave you in good hands with the lovely Monica, and wise Sundancer.  (Try not to kill all the bulls while I'm gone Monica).