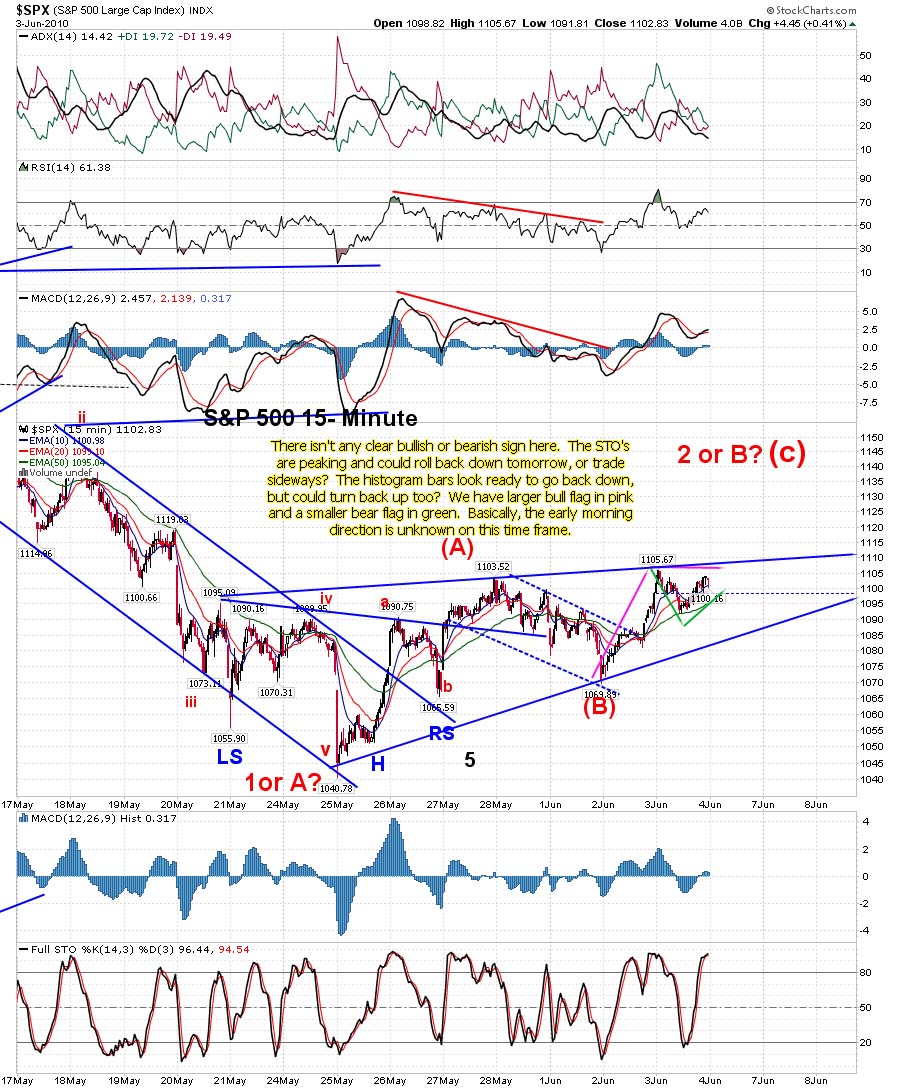 No Post For Friday Again Gang.  I'll have the weekend post up by late Sunday Night, and I'll do a video again as well.  Great Day to be a Bear, and I hope you Bulls survived it and got out OK. Go Enjoy The Weekend.

Basically, we are waiting on the job's report tomorrow. We could rally higher if they are really, really great numbers. However, I believe the numbers are already factored into the market. I think the resistance we hit above at the 200ma, will hold the market back, and another leg down will start.

But, I'll present both sides here, as there are as many bulls reading this post as there are bears, but make no mistake about it... I'm still very bearish. On the 15 minute chart we can see that there seems to be no clear reading either way? The move up from 1069 to 1105, and then back to 1100 could be a large bull flag, while the move from 1105 down to about 1092, and back up to 1100 area, could be a small bear flag. It could go either way tomorrow?

The 60 minute chart looks like it's running out of room in the downward sloping channel, but could go up a little bit more before rolling back down. The histogram bars are overbought now, but could still go higher. The STO's have turned back up, but are already at a high level above 80, which means they don't have much room left before they roll back down. 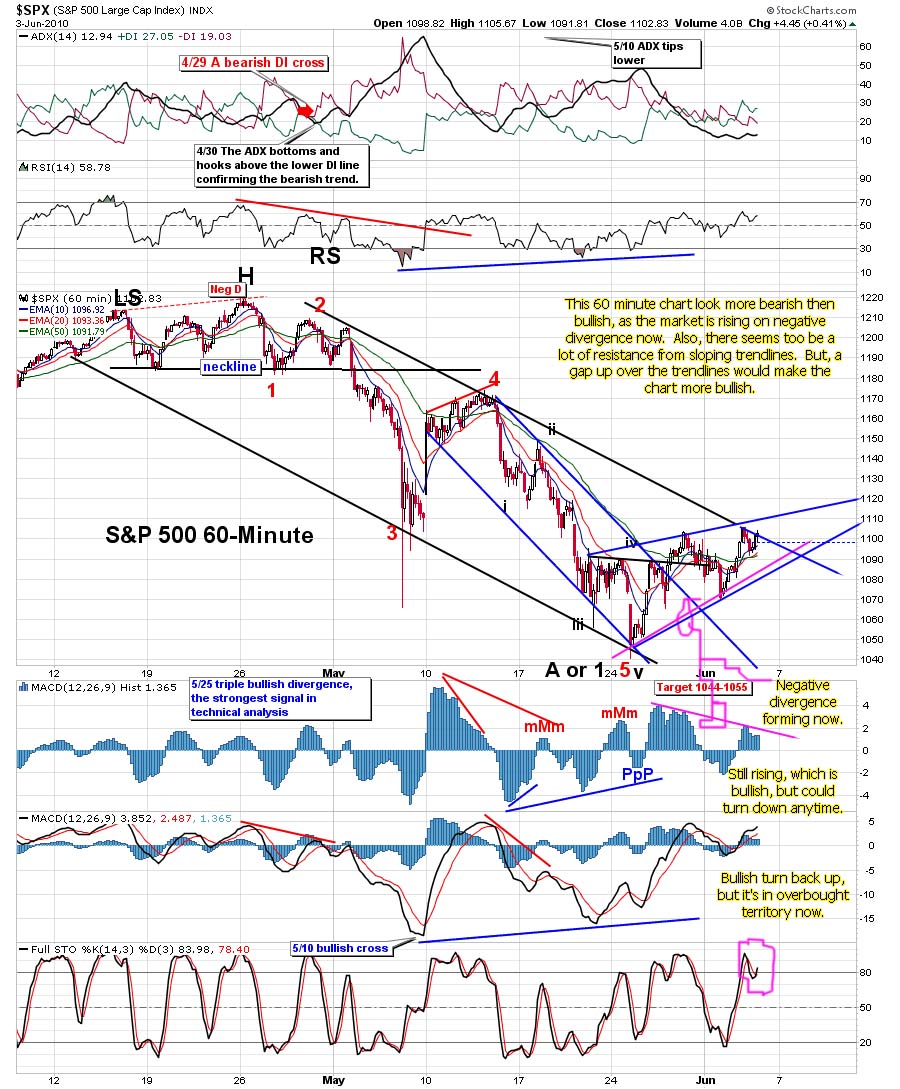 The fact that the volume was very low today, and they didn't push the market higher then the 1106 area that Mr. TopStep mentioned, tells me that they don't want to go higher. Believe me, if the big institutions wanted to take out last Thursdays' high, when we were at 1105 today, they could have done it very easily. This was all retail buyers pushing the market up today. The big boys were just sitting on their hands waiting.

Intentionally holding this market under the high from last Thursday is a key sign that they don't want to go higher yet. They tagged the 200ma on the DOW daily chart and backed off too. The 20ma is barreling down fast toward the 200ma, and will form a powerful necktie of resistance tomorrow, when I expect it to hit it. 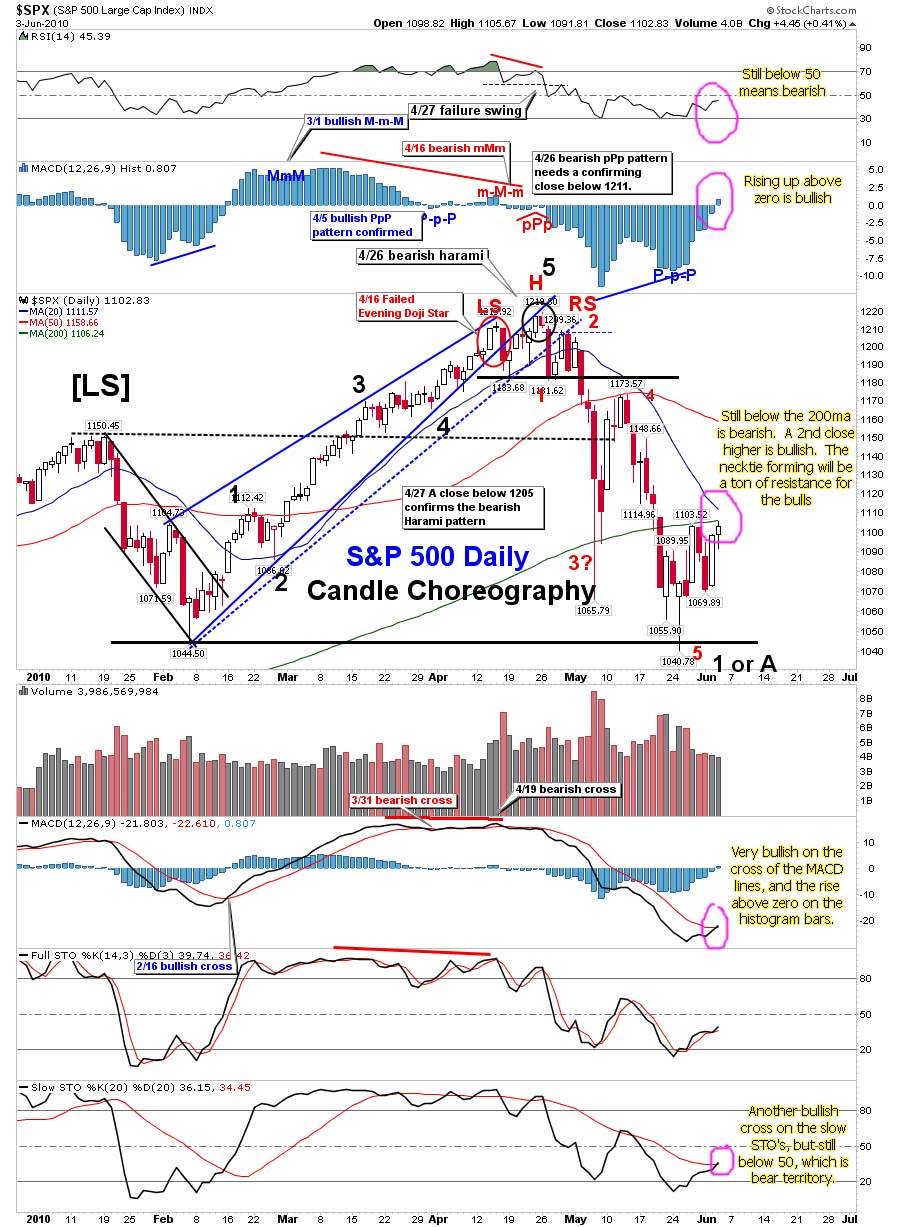 On the bullish side, the daily chart is now above the zero line with the MACD lines now touching and ready to cross over and push the market higher. But, the larger weekly chart is forming a bear flag now, if the market closes out flat this week, then next week should produce a large drop on that time frame. Remember the weekly has now spent the last 2 weeks under the 40ma at 1107.05 spx, this week could be the 3rd time under it. It hasn't been under the 40ma since the March 2009 lows. If the 20ma crosses over the 40ma... you can kiss the market goodbye, as the Bears will be eating steak for dinner. 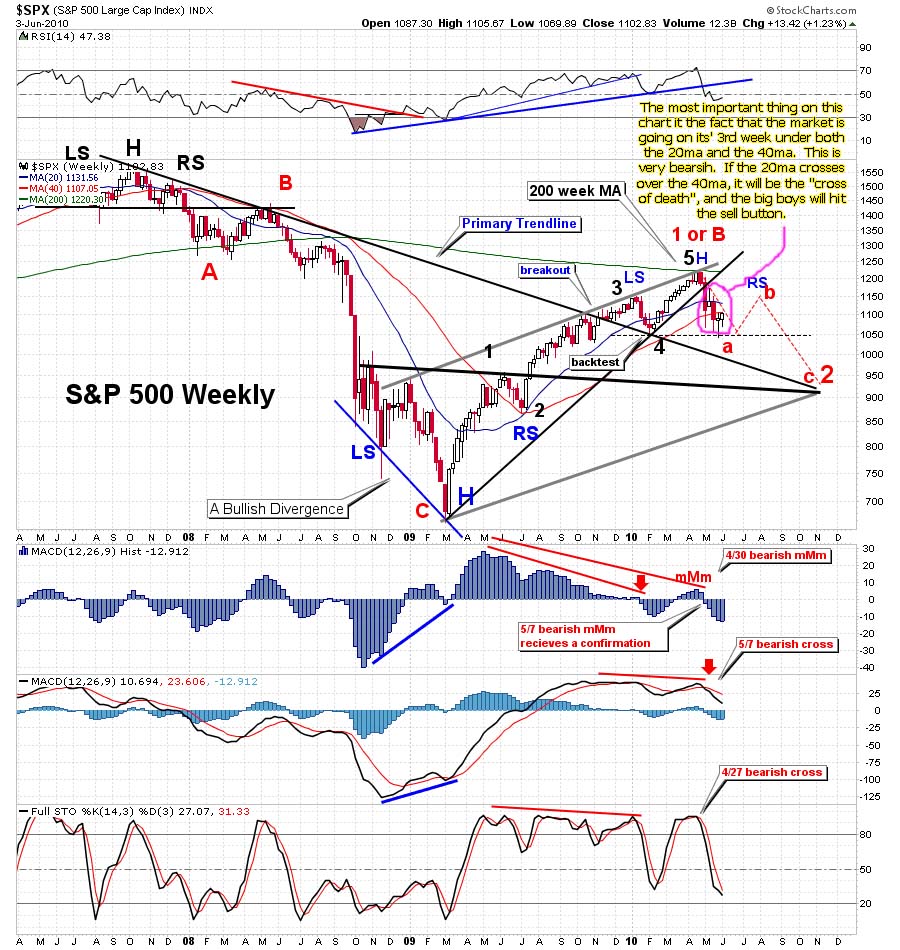 Everyone and their brother seems to be waiting for 1120 spx from the falling channel or 1140-1150 for the right shoulder to form. Do you really think they will just let all the bulls cash in their longs at those levels, and allow the bears to get short? I don't think so. If you listen to what Mr. TopStep said... he stated that the shorts have been basically squeezed out these last 9 days. Without shorts to keep the market up, and without the big institutions buying... who's going to push it up through all the overhead resistance to make that right shoulder? The retail trader? Please.... you know better then that!

This market is heading down again... if not tomorrow, then next week will be another large down week. Rallying when you are above the 20ma and 40ma on the weekly chart is easy, as they provide the support needed to bounce off from, but rallying when you are under them is another story. This market isn't done selling yet... I wouldn't be buying into the bulls' propaganda if I were any of you reading this.

There is more bad news hiding in the closet right now, it's beating on the door to get out. Just when every bear has bailed out, and every bull is on the long train... the door will open, and train tracks will be gone as the next bridge is suddenly blown up... courtesy of Clint Eastwood and Sister Sara.

The bears are waiting patiently at the bottom of the bridge now, as the train is speeding up to its' finally destination. Last stop for the bulls to get off was today, as tomorrow they might have too jump off the train before it reaches the bridge... 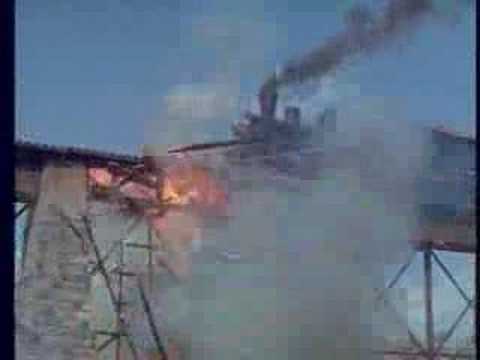 Good luck to both bulls and bears tomorrow...