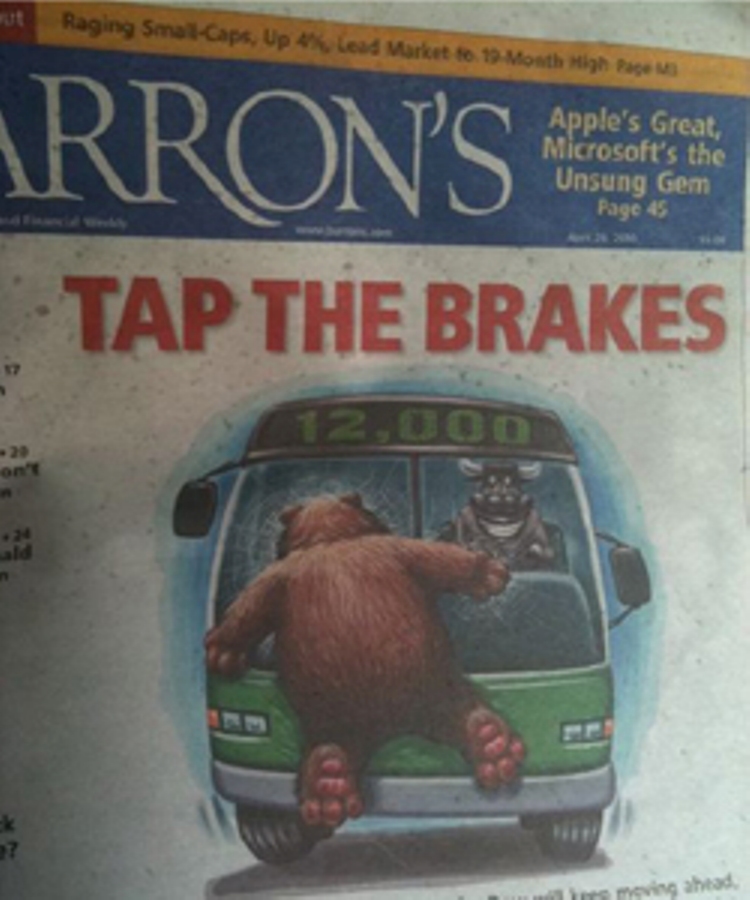 I'm looking for a small red day tomorrow.  I think the rising wedge will breakdown and we will form a channel.  I don't think we will go past the 1340-1345 spx area, as that's strong support now.  I also expect the POMO money, (and the light volume on a Friday) to keep the market from closing too far down.  By the end of the day I expect it to rally back up to about flat, or slightly down.  If by some miracle we go up the the spy FP of 138.86, then I'll go short... but otherwise I'm sitting out until next week.

Looks like we are now on our way up to the SPY FP of 138.86... but will we hit it this Friday?  Who knows?  Anything is possible with Bernanke at the helm (of the Titanic of course).  As for tomorrow, my best guess would be a spinning top doji day. It could be a little up or down, but if all goes as planned... Friday will go up to the FP.  If not, then it might get pushed out until "Bullish Monday".  However, the gangsters are having another meeting at the Legatus conference over the weekend.  This could be a big turning point in the market?  Hard too say right now, but we'll know more by this Friday.

Expecting a wild day tomorrow. Something will be announced by the Fed's at 12:30 pm, which could produce a sell off. But the 2:15 FOMC minutes will likely rally the market back up into the close. All in all... expect the unexpected!

While they fooled me on Monday, with the bogus timed release of the news that they "may?" downgrade the S&P500, the rest of the week was Bullish as expected.  In fact, it was too bullish in my book!  Gapping up huge 2 days in a row spells trouble for the bulls I believe.  It's just not sustainable at that kind of accelerated rate.  Burning a flame that hot will only make it burn out much faster!  Those moves up looked like one big bear squeeze too me... so what's next, more of the same?

Well, since the fake out on Monday caught many bears off guard, it's not likely to have filled the boat with them going into Tuesday of last week.  Just guessing of course, but I'd say that all the bears that got short Monday are now squeezed out.  The relentless b.s. move up the rest of the week threw those bears overboard I'd bet.  Meaning, I'm not expecting much more upside immediately, without more bears to squeeze.

And since they will be a ton of bears waiting to get short around the 1340-1345 area, I don't think the gangsters can get through it that easily next week.  That means they must sneak around behind the bears in the afterhours and premarket sessions by gapping over that area.  But what news could justify such a gap?  Nothing!  But that doesn't stop the gangsters, as they can make something up later... after the gap. 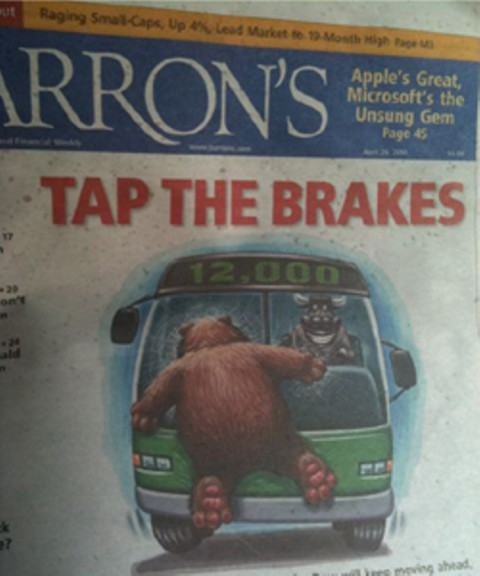 However, with the short term charts all overbought and pointing down, I suspect this gap won't happen on Monday.  They need to reset the charts, which means it will likely be pushed out until later in the week... if they still plan on going up to the FP?  There's no way of knowing if the date is 04-29-2011 as I guessed?  It could be later in the year, and the volume could mean nothing.  This would leave the door open for a pull back next week, and then another lunge higher in May or June.  Remember, the POMO doesn't end until late June.

Ok, so if I were a gangster and I wanted to steal the sheeps' money, I wouldn't let them get short by gapping up into a wall of bears Monday morning.  And since the short term charts can't sustain a "gap and go" move, any gap over the resistance zone has a very high chance of failing.  This means that the bears would jump on board fiercely at that level and profit nicely from the drop that will follow.  Since the gangsters don't want the bears to make an money (as that would be stealing it from them... the professional thieves), that should lead them to Plan B... a Monday sell off without letting bears get short!

Yes, if I were a thief like the wallstreet thugs, I'd do another gap down on Monday to reset the charts for another move higher later in the week... just like they did last Monday!  It's perfect actually, as then they could put in another right shoulder, break the rising wedge, get more bears on board at the bottom, and use them to fuel another short squeeze past the overhead resistance zone.  Bingo!  The perfect evil plan...

Let's not forget that the daily charts are still pointing up, and a one day sell off isn't likely to do much harm to them.  Yes, yes, they could roll over at anytime... but that doesn't mean they will.  They will support a move up to the FP on SPY, and I'd really like to see them get this final top out of the way as soon as possible.   I don't want this thing dragging out until June or July.  Let's get it over with now, so the fun can begin!

For once, I'd like to see the "sell in May, and go away" saying actually work!  Let it be a bullish April and very bearish May... don't you agree?  After all, April is almost done... so give us bears the entire month of May to take this beast down.  Or, just sell off on Monday and don't look back... meaning, let's go ahead and start wave 3 down!  I don't think that's going to happen of course, but it is possible (wishful thinking here). 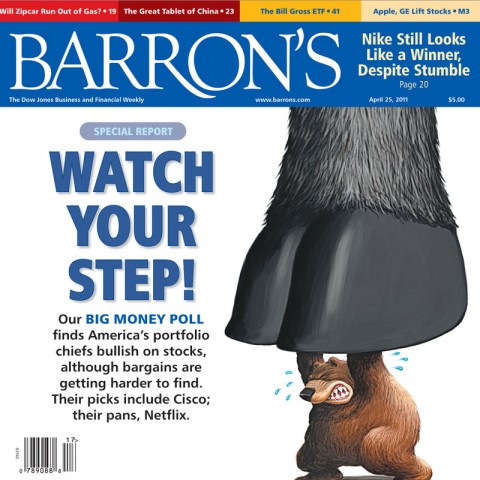 Since gangsters are still in control of this manipulated market, and since they told us the upside target with the spy fp, I have too lean bullish... but only after a sell off on Monday.  I'm thinking they will go down Monday to put in another right shoulder, but a higher low then the previous one.  This should give them another chance to push up again later this week.  The other possibility is that they sell off on Monday and continue down, allowing the daily chart to roll over, and wave 3 down starts.  I just don't think they will do it yet, but I've been fooled before so I wouldn't put it past them!

Also, there is one more possible move on Monday.  While both of the above scenarios involve a gap down on Monday (or a flat open and selling most of the day), there is still the chance that they'll be nice and gap it up... allowing the bears to get short at the resistance zone of 1340-1345.  Wouldn't that be nice of the gangsters?  Of course I'd still expect it to sell off and end the day in the red.  How far red is another story!

The short term charts do support a gap up, as they ended the day on Friday putting in a bull flag.  And I'm sure every trader seen it and many went long into Monday I'd guess.  But to me, it seems too obvious.  A gap up would allow the bulls that went long Friday to close out their positions at the resistance zone for a nice profit, and allow the bears to get short at the same area for a nice move back down.  What a perfect trade that is!  Both bulls and bears would make money from the gangsters.

Now you tell me, do the gangsters usually make it that easy to spot?  I've never seen it so obvious, as everyone will make a profit if it gaps up into resistance and gets slapped back down.  I'm not 100% sure that it can't gap up and go, but the odds are clearly against it.  All the short term charts are overbought and rolling over, making it very unlikely that any gap up will hold.  And since I'm not the only trader that can see this in the charts, I'd say that there will be a ton of bears waiting in the resistance zone for a chance to get short at the top of a move... with high odds that it will be pushed down 10-20 points easily. 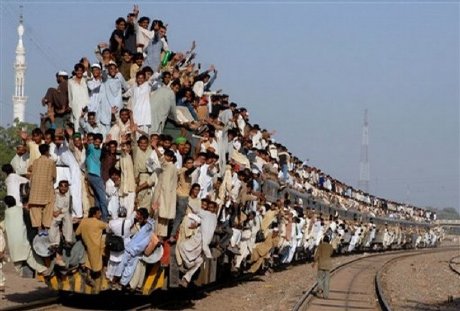 I think back to other times in the past when I've seen them fall short of an area that all the bears are waiting at, not allowing them on board.  The bears then chase the move back down and get short heavily at the bottom of it.  Time and time again, I've seen this happen... it's what gives them the ability to have a big short squeeze.  Other times I've seen them gap over a resistance zone to do a stop sweep and then reverse back down without any bears still in short positions... once again, stealing the little guys money.

This game has been played since the market first opened I'd imagine.  While they still could do the later and gap it above the resistance zone and then sell off, I really doubt that will happen.  Again, the short term charts just don't support that happening for Monday.  That leaves me to one conclusion... Monday is very likely to close down.  Whether it gaps up and falls back down, open flat and sells off all day, or gaps down and closes red... the end result is the same, "A Red Monday".

The "how much" part is the tough one.  I'd like to see a move down to gap window from Tuesdays move, (around 1320 spx), as that would make a higher low and a second right shoulder... still allowing the rest of the week to rally back up.  Now I'm not a bull, as you all know that, but I'd just like to see them get the spy fp out of the way as soon as possible.  Since the daily chart can still go up more this week, I'd like to see it happen while it's still pointing up.  Once the daily rolls back down we should see a bear feast I believe.

Basically, I'd like to see a repeat of last week... a nice fake out move down on Monday, and a rally up the rest of the week, hitting the spy fp by Friday.  Will it happen like that?  I doubt it, but it's possible... even if only a little bit possible.  A much shallower move down on Monday would certainly support a move up to the FP by Friday.  Maybe it will only drop 5-10 points on Monday, and the rest of the week is more of the same Bullish@t from last week... gap up after gap up, on fake news and made up earnings.  Anything is possible in the matrix we live in!