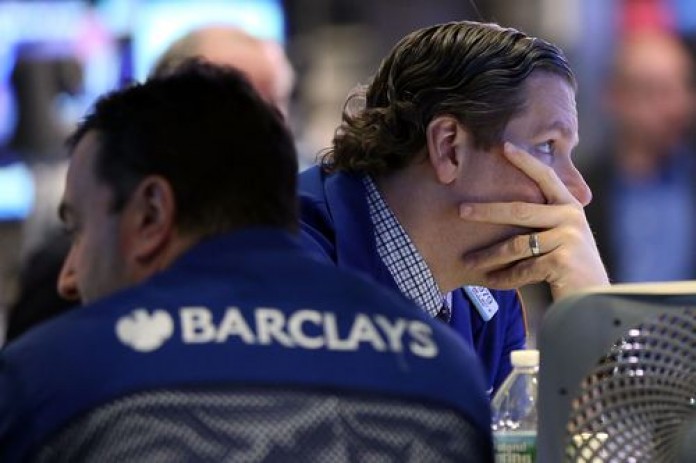 Stocks fell in morning trading Friday as the Dow dropped more than 100 points after the release of a weak January jobs report, a key data point that shows a downshift in the U.S. economy amid global economic turbulence and which adds further uncertainty to Federal Reserve interest rate policy.

Given the market turbulence to start the new year, so-called "Jobs Friday" holds even more weight on Wall Street as it provides a first glimpse into the state of the employment market following the recent market and economic tumult around the globe.

In late morning trading, the Dow Jones industrial average, which has patched together two straight days of gains, was down 150 points, or 1%. The broader Standard & Poor's 500 was down 1.1% and the Nasdaq composite was 1.9% lower. All three major stock indexes were slightly higher in pre-market trading before the release of the jobs number.

Investors are analyzing the jobs number closely, as the not too strong, not too weak print could put the Federal Reserve back in play for a March rate hike. At the start of the year the Fed was eyeing four quarter-point rate hikes totaling 1%, but the early-year tumult in markets has resulted in Wall Street dialing back its expectations, with many investors betting on fewer rate hikes and ruling out another hike next month.

Kate Warne, investment strategist at Edward Jones, says, on balance, the employment report was positive and suggests still solid jobs growth and an economy still on track for modest growth, despite the miss on the headline number. She notes that the three-month average for job creation is a still-solid 231,000.

What the report did not do is reduce uncertainty or provide clarity for markets as to what the Fed will do next, nor will it reduce all recession-related fears, Warne adds.

The jobs report, Warne says, still puts the Fed on track to raise rates at some point this year, "but it doesn’t give the market any signal about whether they will move in March or if they will continue to take a lot of time to make the next move."

The lack of clear signal is seen in the different reactions from Wall Street. Barclays downgraded the number of rate hikes it expects this year to two from three.

Chris Gaffney, president of EverBank World Markets, said today's jobs report won’t change the current market thoughts on a March increase, adding that we still won’t see any action on rates by the Fed in March."

In contrast, Steven Ricchiuto, chief economist at Mizuho Securities USA, says today's jobs report keeps a March rate hike on the table. "The data leaves open a March rate hike by the Fed," Ricchiuto told clients in a note, "especially if markets calm down as they tend to do after a period of volatility."

On the question of recession, Warne says the jobs report suggests the economy is still growing modestly, which "helps dampen recession fears, but not enough to eliminate them."

The jobs report comes amid another tough quarter for U.S. corporate earnings, with fourth-quarter 2015 profits on track to contract more than 4%. A slowdown in overall economic growth is also worrying investors.

Asian stocks finished mixed. The Nikkei 225 in Japan closed down for a fourth straight session, falling 1.3%. Stocks in Hong Kong rose 0.6% and shares of the Shanghai composite in mainland China dipped 0.7%.