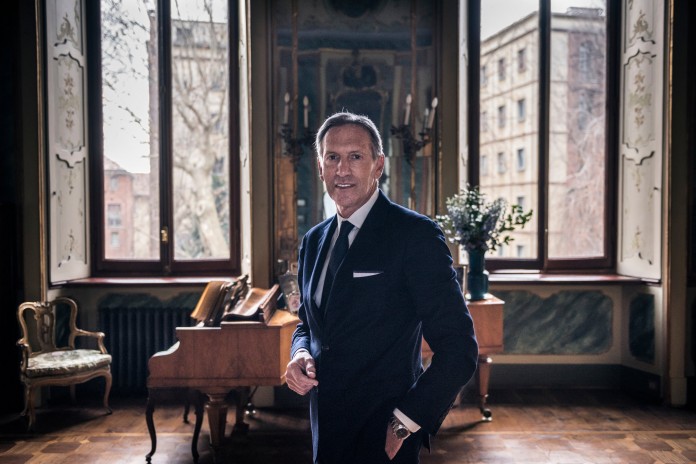 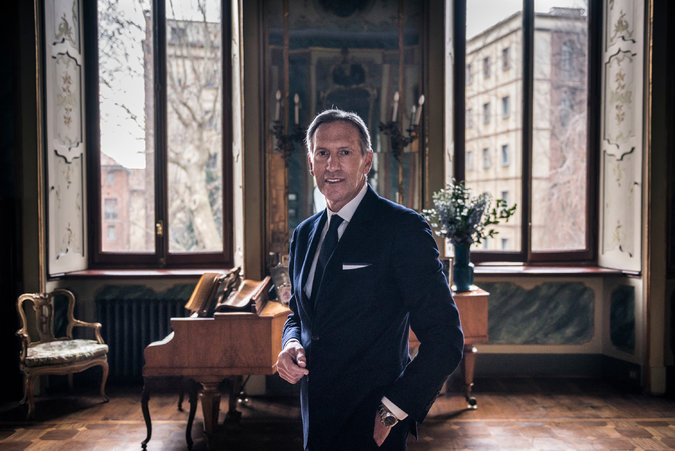 MILAN — Standing in the art-soaked splendor of a Milanese parlor as an array of A-list Italian business leaders listened intently, Howard D. Schultz, chairman and chief executive of Starbucks, recited a remarkable statistic on Friday: Each week, roughly 90 million people pass through a Starbucks somewhere on earth.

Equally remarkable, given that Starbucks operates in 70 countries, is this: Not one of those people is in Italy, a country where coffee culture is central to daily life, and that represents something of a coffee holy grail to Mr. Schultz. Italy, land of the perfect espresso and the exquisitely frothy cappuccino, is a Starbucks-free nation.

Or it was. Mr. Schultz swooped into Milan during Fashion Week to announce that Starbucks would open its first coffee shop in Italy early next year, in Milan. Given that Starbucks is opening 500 stores a year in China, the Milan venture might seem like a nice little ornament. But for Mr. Schultz, coming to Italy is personal. It is also delicate — and a bit of a risk.

“There are very few markets and stores that I’m as intimately involved in as this,” he said in an interview after the announcement. He added, “We’re going to come here with great humility.”

Starbucks has always been careful in Europe, aware that the Continent’s coffee aficionados have refined tastes and an abundance of good coffee shops — and might take offense at the idea that an American company is needed for a better espresso. Yet Starbucks has marched successfully into Britain, France and Germany, and it has even found success in Vienna, the Austrian capital, which gave birth to the coffeehouse.

Italy, though, is Italy.

“I think young people will try it out, for curiosity,” said Orlando Chiari, the 82-year-old owner of Camparino, a century-old coffee bar in central Milan, “but I doubt it will become a major player in Italy.”

Mr. Chiari, impeccable in a gray suit and light blue shirt, said that about 1,500 clients came to his bar every day, and that few were titillated by “new trends.” He decided against deliveries of the sports drink Red Bull because it simply would not sell at Camparino.

“We worship coffee in Italy, while Americans drink coffee on the go in large cups,” he elaborated. “It’s two extremely different cultures.”

Mr. Schultz credits Italy’s distinct coffee culture for inspiring him to create the Starbucks of today. In 1983, he visited Milan for a trade show and wandered into coffee bars in the city. Then, he was marketing director for Starbucks, a chain of four stores in Seattle that sold coffee for people to make at home. His visit to Milan’s coffee bars convinced him that the coffee shop was an experience and culture that could work in the United States.

Mr. Schultz has returned to Italy at least once a year since then, befriending business leaders while studying the local market. His lunchtime announcement ceremony, held in the refined, 19th-century setting of an elegant apartment, was an open embrace from Italy’s business elite: Brunello Cucinelli, the fashion designer and cashmere specialist, mingled with Nerio Alessandri, founder and president of Technogym, a maker of fitness equipment. Cristina Nonino, chief executive of one of Italy’s most famous producers of grappa, was there, as was Renzo Rosso, chairman of OTB Group, parent company of Diesel and other clothing brands.

“Here, he was inspired,” said Leonardo Ferragamo, a director of the luxury Salvatore Ferragamo line, who met Mr. Schultz for the first time on Friday. “He understood the tradition of drinking coffee at the bar, which is unique to Italy.”

Word began to leak out in October that Starbucks was looking at Italy. The company will partner with Percassi, the Italian retail and real estate group, which will own and operate the stores as licensee. Mr. Schultz said the first store in Milan would open early next year, followed by others in the city before the company expands elsewhere in Italy. And as has happened in other countries, Starbucks will tailor itself to local coffee habits.

“There will definitely be a bar,” Mr. Schultz said, alluding to the Italian custom of standing at a bar for a shot of espresso or a morning cappuccino. He also said Starbucks would be competitive on price; an espresso shot costs a euro or less in Italy, well below the typical price point for Starbucks. And Italians tend to drink coffee in small portions, rather than the large ones familiar to Starbucks patrons.

“We’re not coming here to teach Italians to make coffee — nothing like that at all,” Mr. Schultz said, adding that Starbucks should not be perceived as a threat to local coffee bars. “We have to earn the respect.”

Mr. Schultz said Starbucks planned to develop a proprietary coffee blend for the Italian market, and he predicted that the quality of Starbucks coffee “is going to surprise people in Italy.” But also important is an atmosphere intended to appeal to young Italians (as well as the promise of seamless Wi-Fi). Company surveys show that brand recognition is high and a surprising number of younger Italians have tried Starbucks coffee, despite the absence of domestic stores.

Mr. Schultz said he was “involved in every detail of this opening,” underscoring the sentimental and strategic importance he assigns to Italy. Coming back to the place he considers the taproot of the Starbucks experience does bring risks, especially if the company falls flat with Italian customers. But success would bring rewards, especially symbolic, as Mr. Schultz returns to the country synonymous with great coffee.

“He loves Italy more than many Italians,” said Gianmario Tondato Da Ruos, chief executive of Autogrill, the global food and beverage operator for travelers, which is a partner of Starbucks in the United States. “Really.”