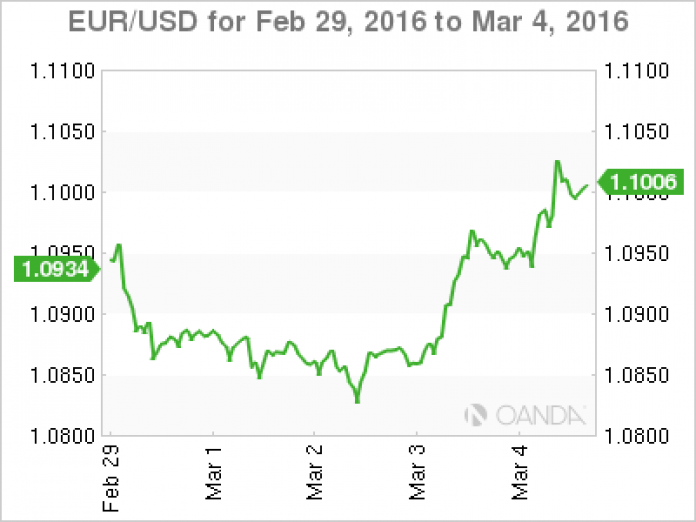 The U.S. non farm payrolls (NFP) report for February painted a mixed picture of U.S. employment. The American economy added 242,000 jobs, far exceeding expectations of around 195,000; the unemployment rate remained unchanged at 4.9%, the lowest level in 8 years. The big miss on Friday was on wage growth. Hourly wages in the U.S. decreased 0.12 percent once again putting the possibility of a March Federal Open Market Committee (FOMC) rate hike off the table. Last month it was the opposite scenario with a miss on the headline jobs number but a surprise rise in hourly wages. The NFP headline growth had more of a mid to long-term effect as the June and September FOMC remain candidates for an interest rate raise.

Two central banks will return to action after skipping February. The European Central Bank (ECB) and the Bank of Canada (BoC) are due to deliver benchmark interest rate statements. The Canadian central bank is expected to hold rates at all-time low of 0.50 percent on Wednesday, March 9 at 10:00 am EST. The BoC was proactive in 2015 with two rate cuts, but has now shifted some of the burden of steering the economy to the government. The Federal budget has been promised to contain significant stimulus and will be unveiled on March 22.

The ECB on the other hand is expected to use monetary policy in an effort to boost European growth. After the communication failure in the December ECB monetary policy meeting, the market was disappointed as the central bank's President Mario Draghi had hinted at a larger stimulus while the final outcome appeared to make some compromises to EU members. The ECB will publish its minimum bid rate on Thursday, March 10 at 7:45 am EST. The forecast calls for a 10 basis points cut and a growing possibility of expanding its quantitative easing (QE) program. Mr. Draghi will appear at a press conference at 8:30 am EST on Thursday. 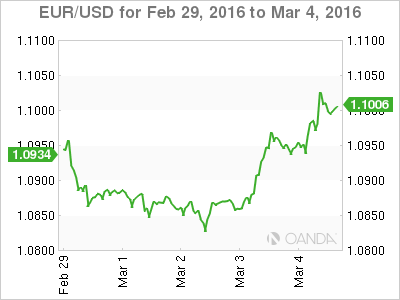 ECB Could Over-Deliver After December Lesson

The ECB is looking to put the fiasco of the December policy meeting behind and analysts expect a mix of easing measures on March 10. The almost foregone conclusion is a 10 basis point cut, leaving the benchmark interest rate deeper into negative territory; some analysts are calling for a 20 basis point cut that would leave the rate at -0.50 percent. An increment to the QE program in the range of 10 to 20 billion euros and an extension of the program have divided opinions.

The global market slowdown has forced the ECB to keep easing to achieve growth. Lower commodity prices have kept the threat of deflation looming over members of the European Union. The ECB has now entered the uncharted waters of Negative Interest Rate Policy (NIRP) in an effort to use unconventional monetary policy tools as it struggles to unite the diverse membership of the union.

The changing economic conditions have affected all central banks and FX prices have reacted accordingly. The U.S. Federal Reserve made a historic rate hike in December only to see fundamentals worsen, and now a follow up rate hike is in doubt this year. Friday's US NFP disappointed on wage growth even though there was a massive gain in the new number of jobs over those expected by economists. The USD has been sold off as the interest rate differential priced in at the end of 2015 might not materialize. A stronger EUR has added to the woes of the ECB as imports are cheaper which come with deflationary implications and exports lose their appeal.

The market will be awaiting an aggressive ECB, and the EUR/USD will be following the final monetary policy decision and President Mario Draghi's press conference.

BOC to be Pleased with Canadian Fundamentals and Oil Price Stability

The Bank of Canada (BoC) was put on the spot in January as energy prices tumbled as supply was at a record high and the sanctions on Iran were lifted. The Canadian dollar has been highly correlated to oil shocks and in the first two months of the year, it was tied at the hip with oil prices. The central bank instead opted to wait for the release of the Government's budget. The Liberal party won the elections last year with a promise to boost spending in infrastructure to stimulate growth and diversity in the economy from its resource dependency. The budget will be released on March 22 and market watchers anticipate the BoC will stick to the script and wait for the imminent arrival of the Federal budget.

Oil prices are stable after the Organization of the Petroleum Exporting Countries (OPEC) members (minus Iran) and Russia are planning a summit later this month to discuss a potential output freeze. All things considered, the world will continue to be awash in the black stuff after Iran ups its production, but the effort from producers to stop the oil price decline appears to be working. Given how hard it was to get producers to agree to discuss the freeze it would not be a shock if it all ends badly.

Canadian data has made the loonie stronger versus the USD. Canadian exports rose for a third consecutive month in January. The 1 percent rise in exports made the Trade deficit lower than expected. The non-resource nature of the growth in exports (consumer goods and vehicles) boosted the CAD as it validates the words of the BoC ahead of its rate statement on Wednesday.