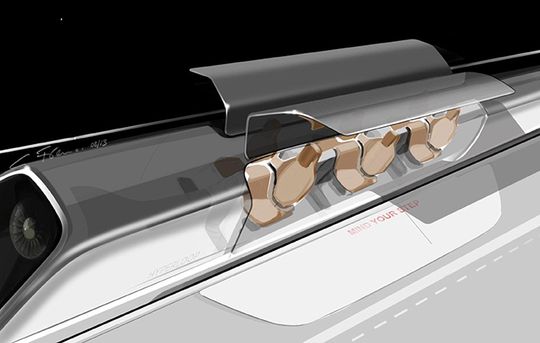 Competing teams will be showing off their Hyperloop prototypes in a bid to see who can build the best, most viable system.

Tubes that will eventually be home to Hyperloop One's 750-mph pods sit in the desert north of Las Vegas, where the Los Angeles-based company is conducting tests on its futuristic transportation technology.(Photo: Marco della Cava, USA TODAY)

LAS VEGAS – The co-founders of a start-up aiming to upend earthbound transportation say they've had their Kitty Hawk moment.

Hyperloop One successfully demonstrated Wednesday one key part of how it plans to send people and cargo racing through cushioned tubes at nearly the speed of sound. This transportation alternative, its backers claim, could reduce the journey between Los Angeles and San Francisco to just 30 minutes.

“We are standing on hallowed ground for us,” said Shervin Pishevar, cofounder of Los Angeles-based Hyperloop One, which is among a few companies focused on the hyperloop technology.

What the gaggle of investors and journalists saw from metal risers planted in the desert north of Las Vegas was a lot more rudimentary than artists' rendering of the future, however.

Instead it was more a proof of concept, much like those first airborne moments shared by the Wright Brothers in their airplane.

A bare-metal sled — not a tube — rocketed down a track, with the sled elevated slightly by magnetic levitation technology. It accelerated at 2 g-force before hitting a patch of sand 100 yards down the line.

The total test was just two seconds. But it was enough, Hyperloop One's founders said, to show that technology similar to that used in high-speed maglev trains could be deployed more cheaply, without the steep cost of high-tech trains and rails.

"This is about validating the hardware and software,” said Hyperloop One cofounder and chief technology officer Brogan BamBrogan. “We’re aiming to hit 400 mph in two seconds.

"And by the end of the year hopefully we’ll have a full test, with the sled in a tube accelerating with our custom propulsion.”

That test will also take place here. The team is aiming to build a 3-mile track that will feature tubes elevated above ground by pylons. “This is where hyperloop is getting invented,” said BamBrogan.

BamBrogan noted that humans in a hyperloop pod wouldn’t feel the acceleration as it would happen more gradually, eventually hitting close to 750 mph. 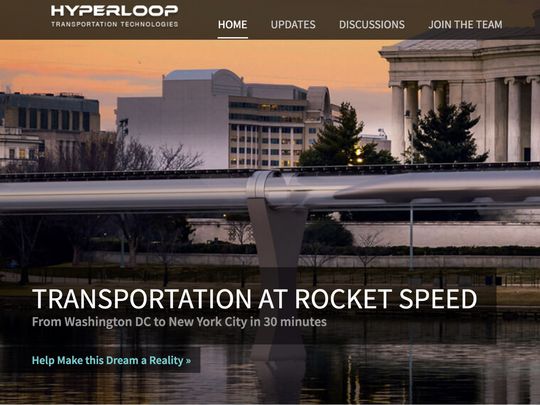 In Los Angeles, the company is testing various levitation methods, based on passive magnetic levitation technology, a version of which is currently in use on high speed maglev trains in Europe and Asia.

"We think we can move cargo by 2019 and passengers by 2021, if we can replicate the kind of support we've gotten here from the county and city of North Las Vegas," said CEO Rob Lloyd.

Indeed, Hyperloop One executives were eager to liken the new mode of transportation to the building of the Transcontinental Railroad in the 19th-century and the race to the moon in the 1960s. But in the former case, development was spurred by a sense of manifest destiny and limitless land. In the latter, a nation's resources fueled the rocket project.

Today, companies such as Hyperloop One and Hyperloop Transportation Technologies, both based in Los Angeles, face hurdles that include land use rights and existing transportation players — train and truck companies — that are financially invested in keeping the status quo.

Hyperloop pioneers counter that their technology will eventually win out due to lower costs (once a hyperloop pod is underway it can sustain its speed with very low energy use) while producing no carbon emissions (a critical element in global warming).

Hyperloop One announced Tuesday that it had secured $80 million in Series B funding to continue its research and development testing, bringing the company's total to nearly $120 million.

The idea for hyperloop first gained momentum in 2013, when SpaceX and Tesla CEO Elon Musk first posited the notion of using magnetic levitation technology to zip travelers between cities hundreds of miles apart at a speed greater than airplane travel. SpaceX is sponsoring a competition to source tech solutions for hyperloop, but will not build a company around the innovation.

Pishevar recounted meeting with Musk, a friend, and asking if he could pursue the tech's commercial potential.

Musk's response? "He said sure, because he was too busy trying to get to Mars anyway," said Pishevar with a laugh.