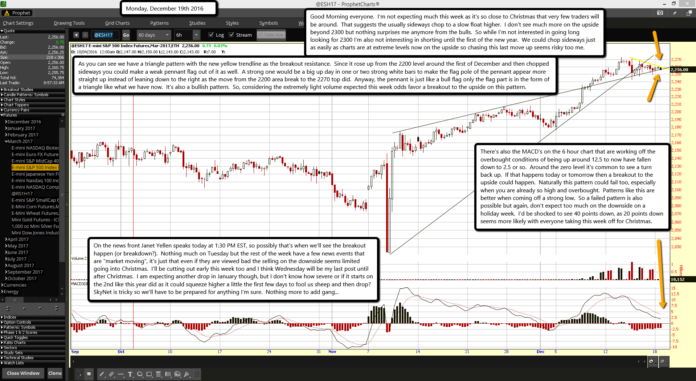 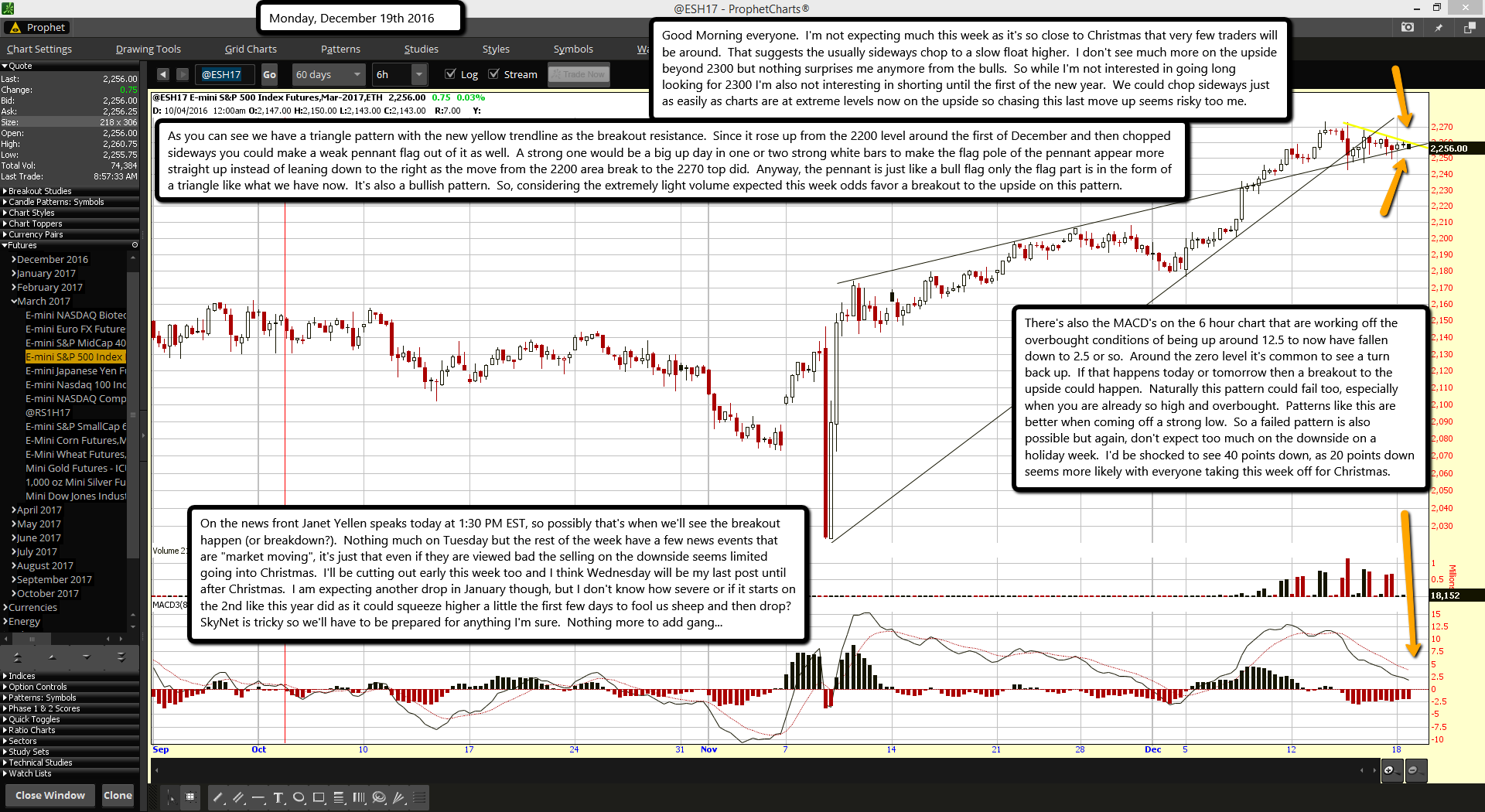 Good Morning everyone.  I'm not expecting much this week as it's so close to Christmas that very few traders will be around.  That suggests the usually sideways chop to a slow float higher.  I don't see much more on the upside beyond 2300 but nothing surprises me anymore from the bulls.  So while I'm not interested in going long looking for 2300 I'm also not interesting in shorting until the first of the new year.  We could chop sideways just as easily as charts are at extreme levels now on the upside so chasing this last move up seems risky too me.

As you can see we have a triangle pattern with the new yellow trendline as the breakout resistance.  Since it rose up from the 2200 level around the first of December and then chopped sideways you could make a weak pennant flag out of it as well.  A strong one would be a big up day in one or two strong white bars to make the flag pole of the pennant appear more straight up instead of leaning down to the right as the move from the 2200 area break to the 2270 top did.  Anyway, the pennant is just like a bull flag only the flag part is in the form of a triangle like what we have now.  It's also a bullish pattern.  So, considering the extremely light volume expected this week odds favor a breakout to the upside on this pattern.

There's also the MACD's on the 6 hour chart that are working off the overbought conditions of being up around 12.5 to now have fallen down to 2.5 or so.  Around the zero level it's common to see a turn back up.  If that happens today or tomorrow then a breakout to the upside could happen.  Naturally this pattern could fail too, especially when you are already so high and overbought.  Patterns like this are better when coming off a strong low.  So a failed pattern is also possible but again, don't expect too much on the downside on a holiday week.  I'd be shocked to see 40 points down, as 20 points down seems more likely with everyone taking this week off for Christmas.

On the news front Janet Yellen speaks today at 1:30 PM EST, so possibly that's when we'll see the breakout happen (or breakdown?).  Nothing much on Tuesday but the rest of the week have a few news events that are "market moving", it's just that even if they are viewed bad the selling on the downside seems limited going into Christmas.  I'll be cutting out early this week too and I think Wednesday will be my last post until after Christmas.  I am expecting another drop in January though, but I don't know how severe or if it starts on the 2nd like this year did as it could squeeze higher a little the first few days to fool us sheep and then drop?  SkyNet is tricky so we'll have to be prepared for anything I'm sure.  Nothing more to add gang...