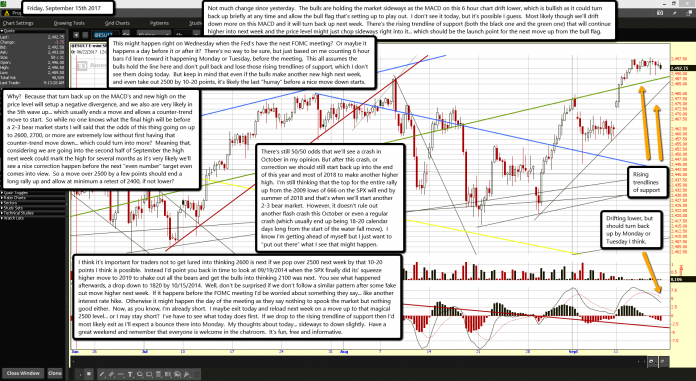 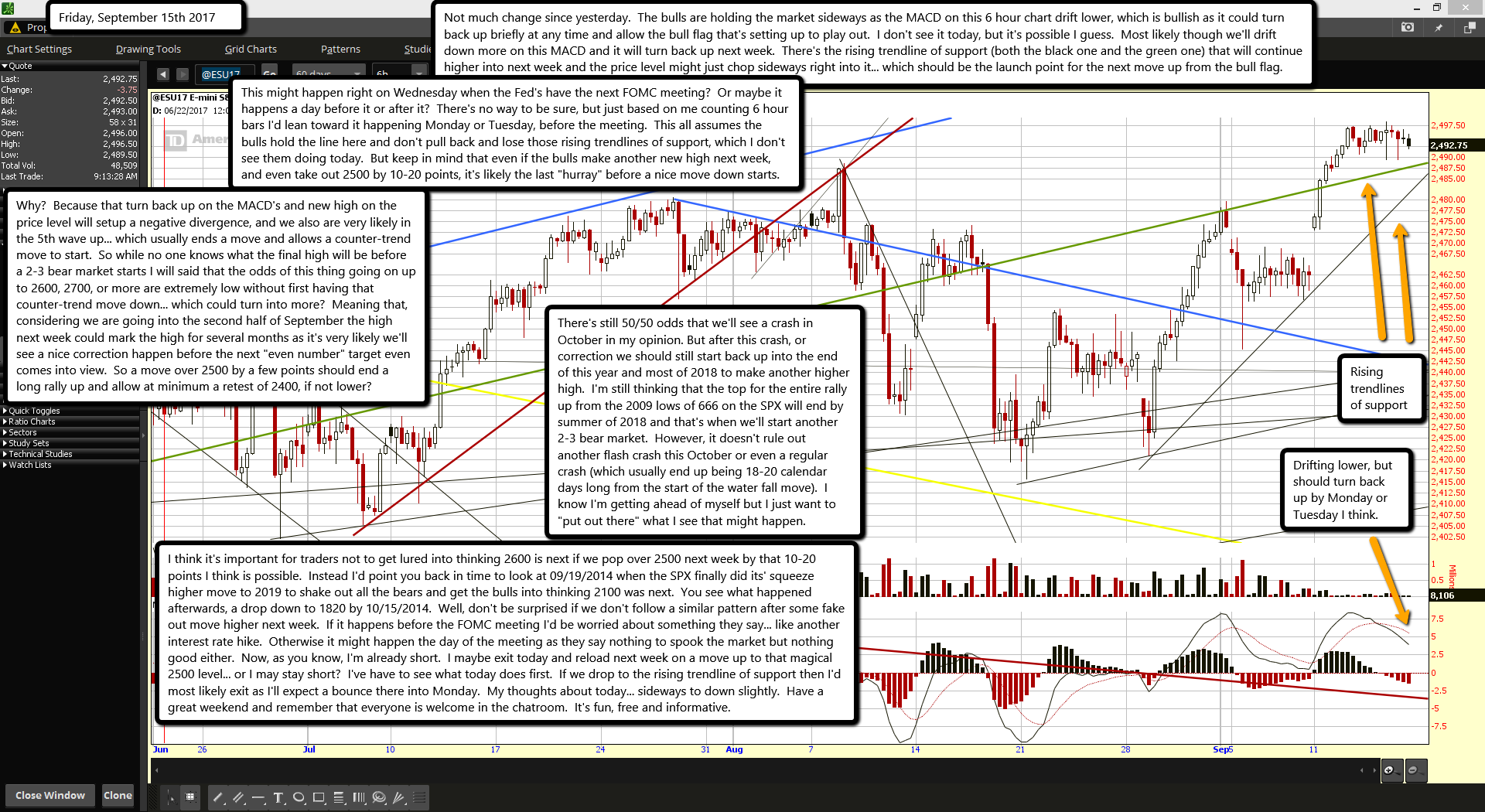 Not much change since yesterday.  The bulls are holding the market sideways as the MACD on this 6 hour chart drift lower, which is bullish as it could turn back up briefly at any time and allow the bull flag that's setting up to play out.  I don't see it today, but it's possible I guess.  Most likely though we'll drift down more on this MACD and it will turn back up next week.  There's the rising trendline of support (both the black one and the green one) that will continue higher into next week and the price level might just chop sideways right into it... which should be the launch point for the next move up from the bull flag.

This might happen right on Wednesday when the Fed's have the next FOMC meeting?  Or maybe it happens a day before it or after it?  There's no way to be sure, but just based on me counting 6 hour bars I'd lean toward it happening Monday or Tuesday, before the meeting.  This all assumes the bulls hold the line here and don't pull back and lose those rising trendlines of support, which I don't see them doing today.  But keep in mind that even if the bulls make another new high next week, and even take out 2500 by 10-20 points, it's likely the last "hurray" before a nice move down starts.

Why?  Because that turn back up on the MACD's and new high on the price level will setup a negative divergence, and we also are very likely in the 5th wave up... which usually ends a move and allows a counter-trend move to start.  So while no one knows what the final high will be before a 2-3 bear market starts I will said that the odds of this thing going on up to 2600, 2700, or more are extremely low without first having that counter-trend move down... which could turn into more?  Meaning that, considering we are going into the second half of September the high next week could mark the high for several months as it's very likely we'll see a nice correction happen before the next "even number" target even comes into view.  So a move over 2500 by a few points should end a long rally up and allow at minimum a retest of 2400, if not lower?

There's still 50/50 odds that we'll see a crash in October in my opinion. But after this crash, or correction we should still start back up into the end of this year and most of 2018 to make another higher high.  I'm still thinking that the top for the entire rally up from the 2009 lows of 666 on the SPX will end by summer of 2018 and that's when we'll start another 2-3 bear market.  However, it doesn't rule out another flash crash this October or even a regular crash (which usually end up being 18-20 calendar days long from the start of the water fall move).  I know I'm getting ahead of myself but I just want to "put out there" what I see that might happen.

I think it's important for traders not to get lured into thinking 2600 is next if we pop over 2500 next week by that 10-20 points I think is possible.  Instead I'd point you back in time to look at 09/19/2014 when the SPX finally did its' squeeze higher move to 2019 to shake out all the bears and get the bulls into thinking 2100 was next.  You see what happened afterwards, a drop down to 1820 by 10/15/2014.  Well, don't be surprised if we don't follow a similar pattern after some fake out move higher next week.  If it happens before the FOMC meeting I'd be worried about something they say... like another interest rate hike.  Otherwise it might happen the day of the meeting as they say nothing to spook the market but nothing good either.  Now, as you know, I'm already short.  I maybe exit today and reload next week on a move up to that magical 2500 level... or I may stay short?  I've have to see what today does first.  If we drop to the rising trendline of support then I'd most likely exit as I'll expect a bounce there into Monday.  My thoughts about today... sideways to down slightly.  Have a great weekend and remember that everyone is welcome in the chatroom.  It's fun, free and informative.