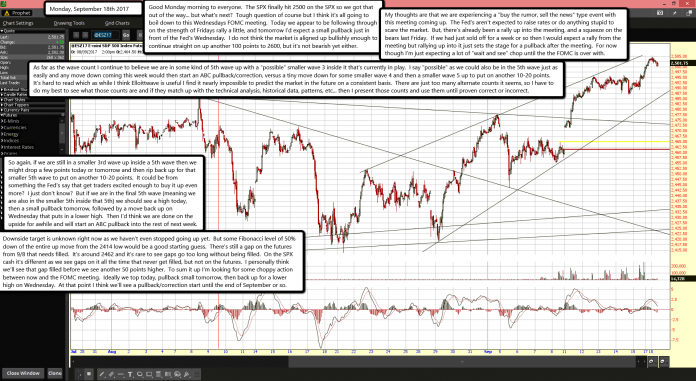 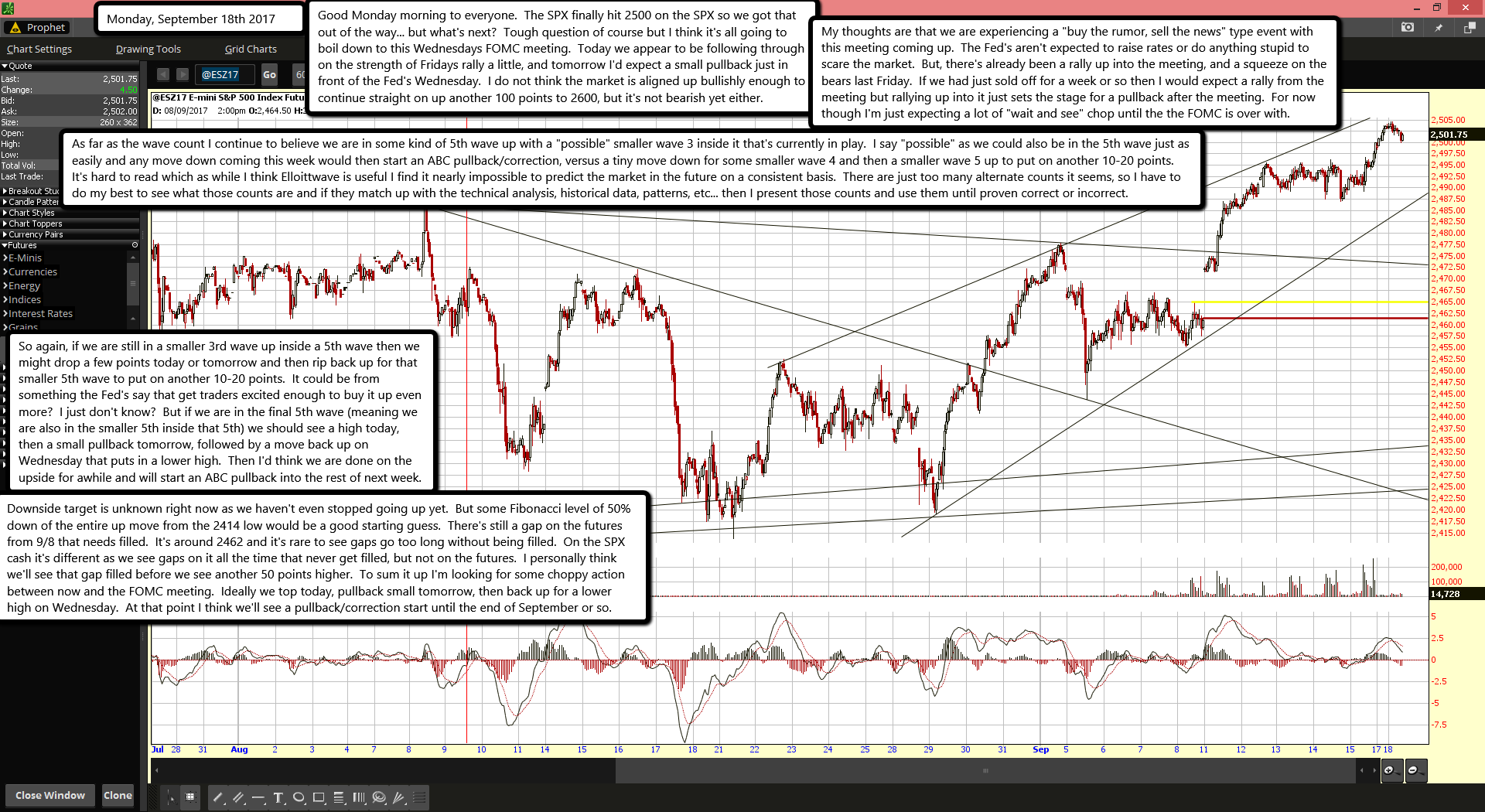 Good Monday morning to everyone.  The SPX finally hit 2500 on the SPX so we got that out of the way... but what's next?  Tough question of course but I think it's all going to boil down to this Wednesdays FOMC meeting.  Today we appear to be following through on the strength of Fridays rally a little, and tomorrow I'd expect a small pullback just in front of the Fed's Wednesday.  I do not think the market is aligned up bullishly enough to continue straight on up another 100 points to 2600, but it's not bearish yet either.

My thoughts are that we are experiencing a "buy the rumor, sell the news" type event with this meeting coming up.  The Fed's aren't expected to raise rates or do anything stupid to scare the market.  But, there's already been a rally up into the meeting, and a squeeze on the bears last Friday.  If we had just sold off for a week or so then I would expect a rally from the meeting but rallying up into it just sets the stage for a pullback after the meeting.  For now though I'm just expecting a lot of "wait and see" chop until the the FOMC is over with.

As far as the wave count I continue to believe we are in some kind of 5th wave up with a "possible" smaller wave 3 inside it that's currently in play.  I say "possible" as we could also be in the 5th wave just as easily and any move down coming this week would then start an ABC pullback/correction, versus a tiny move down for some smaller wave 4 and then a smaller wave 5 up to put on another 10-20 points.  It's hard to read which as while I think Elloittwave is useful I find it nearly impossible to predict the market in the future on a consistent basis.  There are just too many alternate counts it seems, so I have to do my best to see what those counts are and if they match up with the technical analysis, historical data, patterns, etc... then I present those counts and use them until proven correct or incorrect.

So again, if we are still in a smaller 3rd wave up inside a 5th wave then we might drop a few points today or tomorrow and then rip back up for that smaller 5th wave to put on another 10-20 points.  It could be from something the Fed's say that get traders excited enough to buy it up even more?  I just don't know?  But if we are in the final 5th wave (meaning we are also in the smaller 5th inside that 5th) we should see a high today, then a small pullback tomorrow, followed by a move back up on Wednesday that puts in a lower high.  Then I'd think we are done on the upside for awhile and will start an ABC pullback into the rest of next week.

Downside target is unknown right now as we haven't even stopped going up yet.  But some Fibonacci level of 50% down of the entire up move from the 2414 low would be a good starting guess.  There's still a gap on the futures from 9/8 that needs filled.  It's around 2462 and it's rare to see gaps go too long without being filled.  On the SPX cash it's different as we see gaps on it all the time that never get filled, but not on the futures.  I personally think we'll see that gap filled before we see another 50 points higher.  To sum it up I'm looking for some choppy action between now and the FOMC meeting.  Ideally we top today, pullback small tomorrow, then back up for a lower high on Wednesday.  At that point I think we'll see a pullback/correction start until the end of September or so. 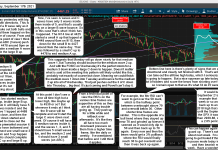