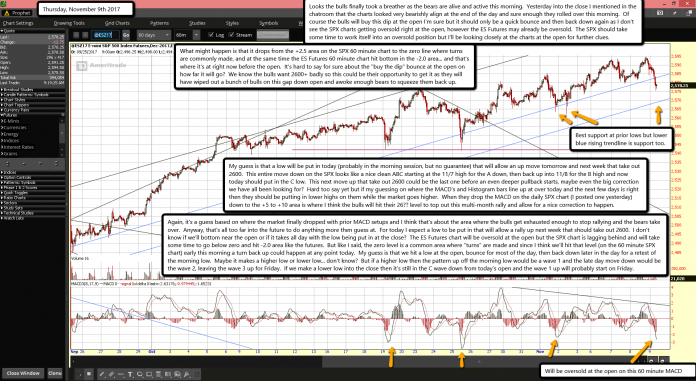 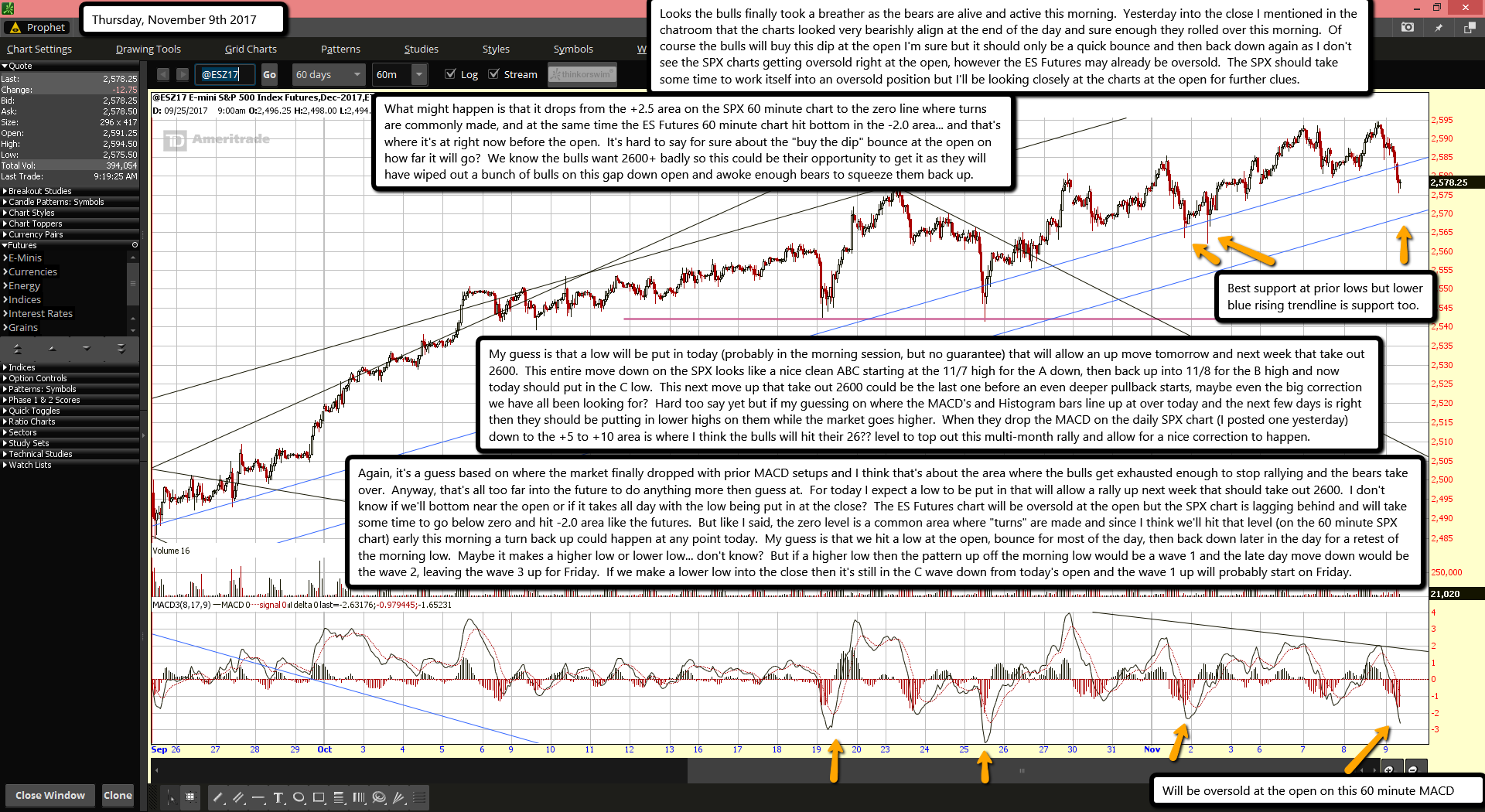 Looks the bulls finally took a breather as the bears are alive and active this morning.  Yesterday into the close I mentioned in the chatroom that the charts looked very bearishly align at the end of the day and sure enough they rolled over this morning.  Of course the bulls will buy this dip at the open I'm sure but it should only be a quick bounce and then back down again as I don't see the SPX charts getting oversold right at the open, however the ES Futures may already be oversold.  The SPX should take some time to work itself into an oversold position but I'll be looking closely at the charts at the open for further clues.

What might happen is that it drops from the +2.5 area on the SPX 60 minute chart to the zero line where turns are commonly made, and at the same time the ES Futures 60 minute chart hit bottom in the -2.0 area... and that's where it's at right now before the open.  It's hard to say for sure about the "buy the dip" bounce at the open on how far it will go?  We know the bulls want 2600+ badly so this could be their opportunity to get it as they will have wiped out a bunch of bulls on this gap down open and awoke enough bears to squeeze them back up.

My guess is that a low will be put in today (probably in the morning session, but no guarantee) that will allow an up move tomorrow and next week that take out 2600.  This entire move down on the SPX looks like a nice clean ABC starting at the 11/7 high for the A down, then back up into 11/8 for the B high and now today should put in the C low.  This next move up that take out 2600 could be the last one before an even deeper pullback starts, maybe even the big correction we have all been looking for?  Hard too say yet but if my guessing on where the MACD's and Histogram bars line up at over today and the next few days is right then they should be putting in lower highs on them while the market goes higher.  When they drop the MACD on the daily SPX chart (I posted one yesterday) down to the +5 to +10 area is where I think the bulls will hit their 26?? level to top out this multi-month rally and allow for a nice correction to happen.

Again, it's a guess based on where the market finally dropped with prior MACD setups and I think that's about the area where the bulls get exhausted enough to stop rallying and the bears take over.  Anyway, that's all too far into the future to do anything more then guess at.  For today I expect a low to be put in that will allow a rally up next week that should take out 2600.  I don't know if we'll bottom near the open or if it takes all day with the low being put in at the close?  The ES Futures chart will be oversold at the open but the SPX chart is lagging behind and will take some time to go below zero and hit -2.0 area like the futures.  But like I said, the zero level is a common area where "turns" are made and since I think we'll hit that level (on the 60 minute SPX chart) early this morning a turn back up could happen at any point today.  My guess is that we hit a low at the open, bounce for most of the day, then back down later in the day for a retest of the morning low.  Maybe it makes a higher low or lower low... don't know?  But if a higher low then the pattern up off the morning low would be a wave 1 and the late day move down would be the wave 2, leaving the wave 3 up for Friday.  If we make a lower low into the close then it's still in the C wave down from today's open and the wave 1 up will probably start on Friday.