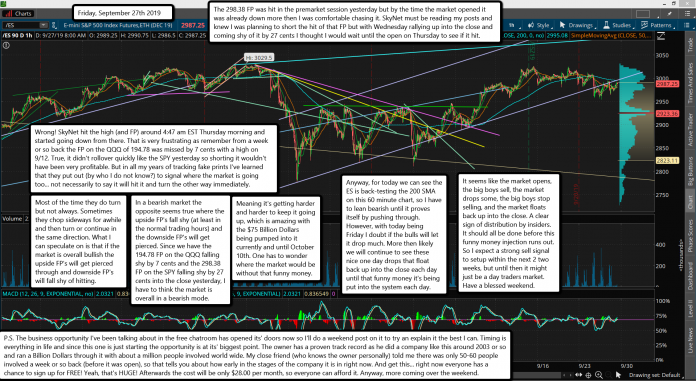 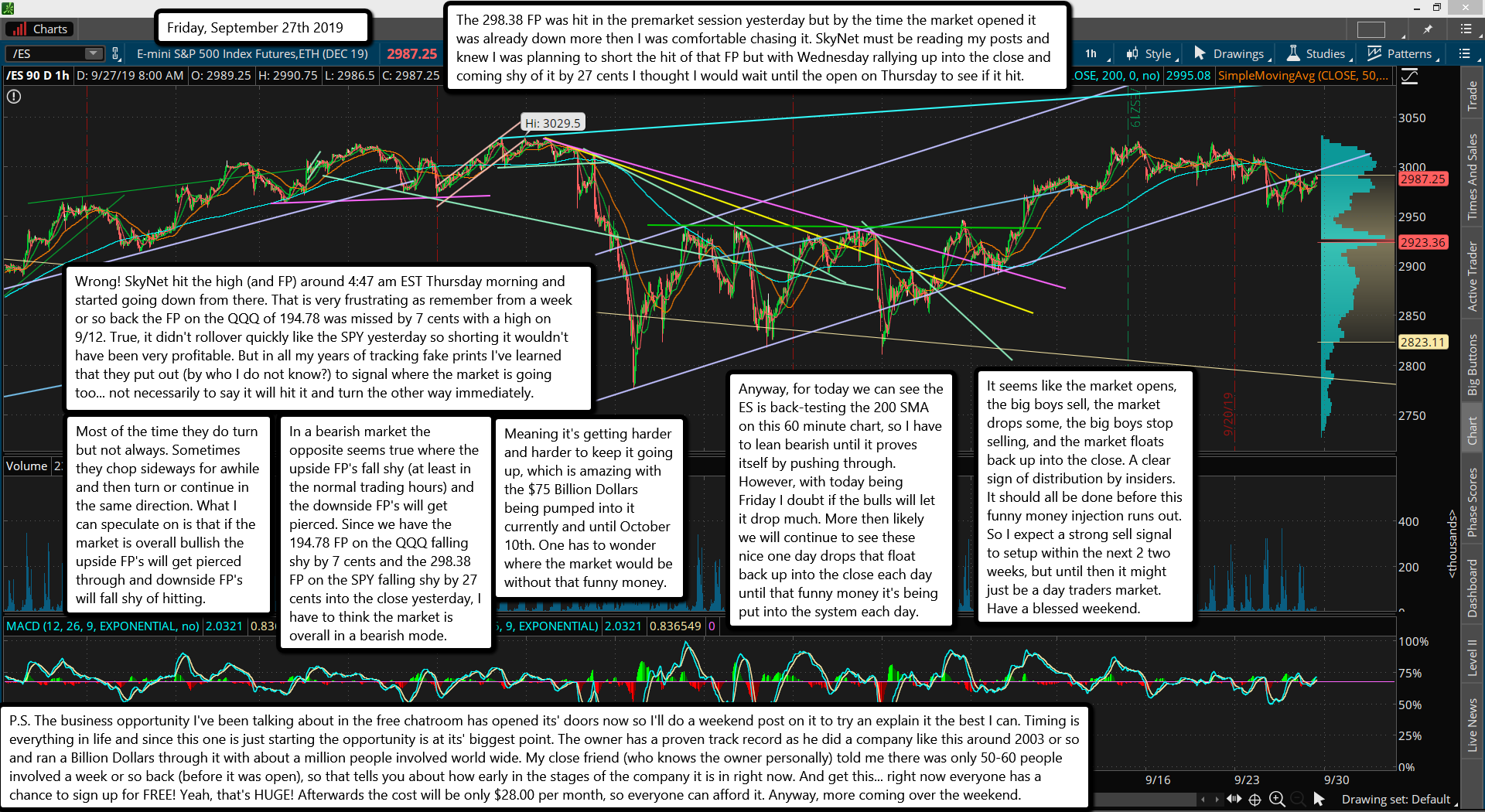 The 298.38 FP was hit in the premarket session yesterday but by the time the market opened it was already down more then I was comfortable chasing it. SkyNet must be reading my posts and knew I was planning to short the hit of that FP but with Wednesday rallying up into the close and coming shy of it by 27 cents I thought I would wait until the open on Thursday to see if it hit.

Wrong! SkyNet hit the high (and FP) around 4:47 am EST Thursday morning and started going down from there. That is very frustrating as remember from a week or so back the FP on the QQQ of 194.78 was missed by 7 cents with a high on 9/12. True, it didn't rollover quickly like the SPY yesterday so shorting it wouldn't have been very profitable. But in all my years of tracking fake prints I've learned that they put out (by who I do not know?) to signal where the market is going too... not necessarily to say it will hit it and turn the other way immediately.

Most of the time they do turn but not always. Sometimes they chop sideways for awhile and then turn or continue in the same direction. What I can speculate on is that if the market is overall bullish the upside FP's will get pierced through and downside FP's will fall shy of hitting.

In a bearish market the opposite seems true where the upside FP's fall shy (at least in the normal trading hours) and the downside FP's will get pierced. Since we have the 194.78 FP on the QQQ falling shy by 7 cents and the 298.38 FP on the SPY falling shy by 27 cents into the close yesterday, I have to think the market is overall in a bearish mode.

Meaning it's getting harder and harder to keep it going up, which is amazing with the $75 Billion Dollars being pumped into it currently and until October 10th. One has to wonder where the market would be without that funny money.

Anyway, for today we can see the ES is back-testing the 200 SMA on this 60 minute chart, so I have to lean bearish until it proves itself by pushing through. However, with today being Friday I doubt if the bulls will let it drop much. More then likely we will continue to see these nice one day drops that float back up into the close each day until that funny money it's being put into the system each day.

It seems like the market opens, the big boys sell, the market drops some, the big boys stop selling, and the market floats back up into the close. A clear sign of distribution by insiders. It should all be done before this funny money injection runs out. So I expect a strong sell signal to setup within the next 2 two weeks, but until then it might just be a day traders market. Have a blessed weekend.

P.S. The business opportunity I've been talking about in the free chatroom has opened its' doors now so I'll do a weekend post on it to try an explain it the best I can. Timing is everything in life and since this one is just starting the opportunity is at its' biggest point. The owner has a proven track record as he did a company like this around 2003 or so and ran a Billion Dollars through it with about a million people involved world wide. My close friend (who knows the owner personally) told me there was only 50-60 people involved a week or so back (before it was open), so that tells you about how early in the stages of the company it is in right now. And get this... right now everyone has a chance to sign up for FREE! Yeah, that's HUGE! Afterwards the cost will be only $28.00 per month, so everyone can afford it. Anyway, more coming over the weekend.