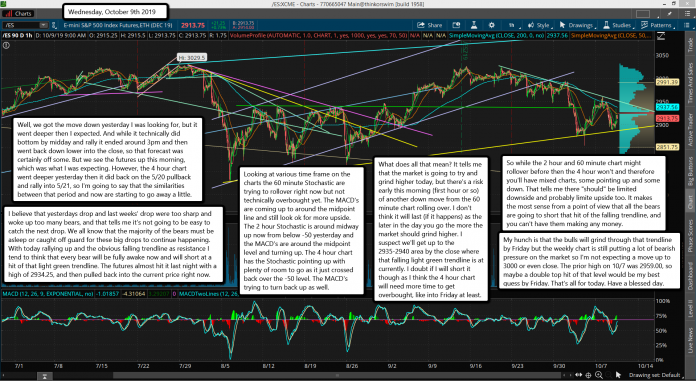 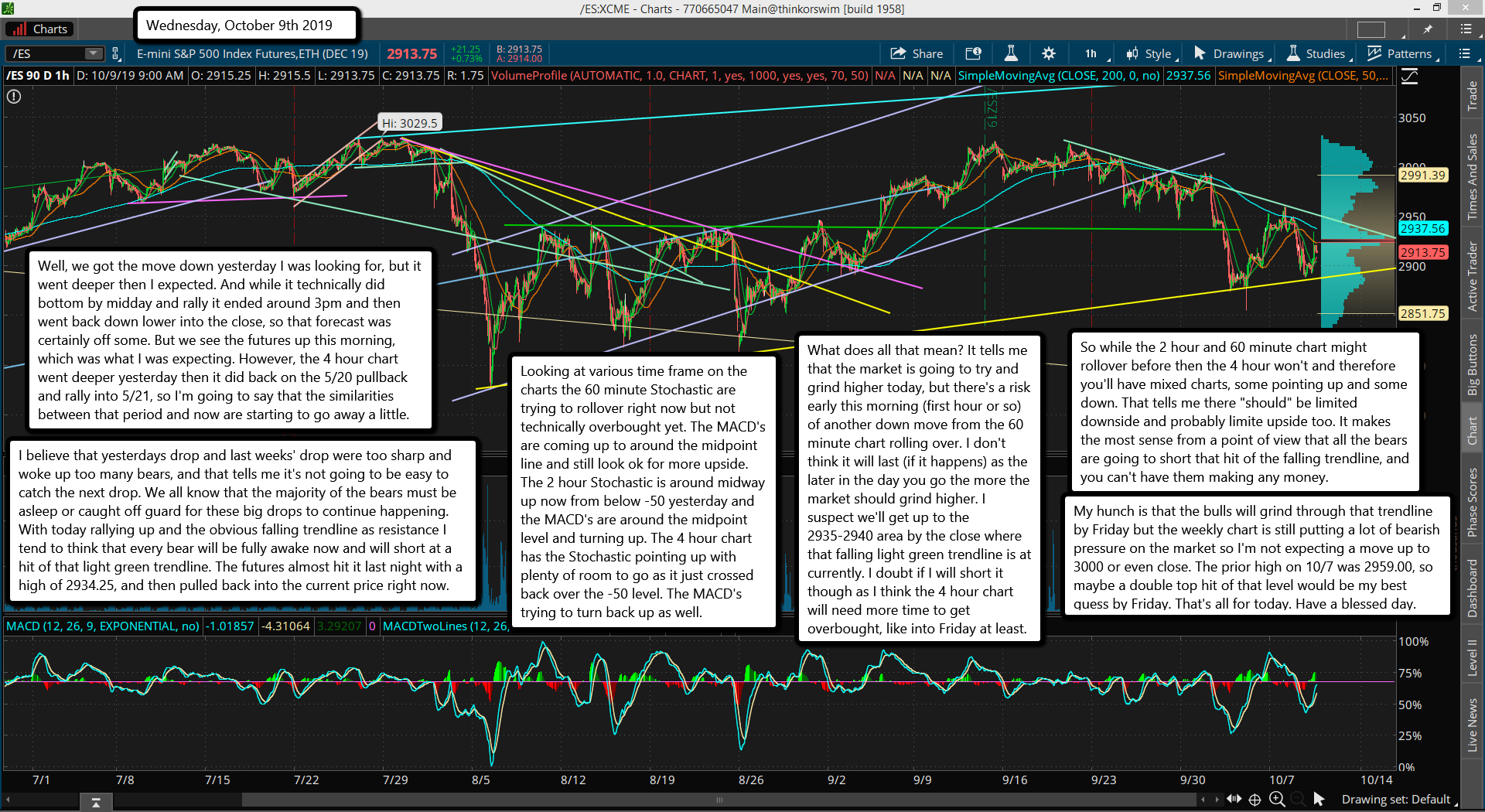 Well, we got the move down yesterday I was looking for, but it went deeper then I expected. And while it technically did bottom by midday and rally it ended around 3pm and then went back down lower into the close, so that forecast was certainly off some. But we see the futures up this morning, which was what I was expecting. However, the 4 hour chart went deeper yesterday then it did back on the 5/20 pullback and rally into 5/21, so I'm going to say that the similarities between that period and now are starting to go away a little.

I believe that yesterdays drop and last weeks' drop were too sharp and woke up too many bears, and that tells me it's not going to be easy to catch the next drop. We all know that the majority of the bears must be asleep or caught off guard for these big drops to continue happening. With today rallying up and the obvious falling trendline as resistance I tend to think that every bear will be fully awake now and will short at a hit of that light green trendline. The futures almost hit it last night with a high of 2934.25, and then pulled back into the current price right now.

Looking at various time frame on the charts the 60 minute Stochastic are trying to rollover right now but not technically overbought yet. The MACD's are coming up to around the midpoint line and still look ok for more upside. The 2 hour Stochastic is around midway up now from below -50 yesterday and the MACD's are around the midpoint level and turning up. The 4 hour chart has the Stochastic pointing up with plenty of room to go as it just crossed back over the -50 level. The MACD's trying to turn back up as well.

What does all that mean? It tells me that the market is going to try and grind higher today, but there's a risk early this morning (first hour or so) of another down move from the 60 minute chart rolling over. I don't think it will last (if it happens) as the later in the day you go the more the market should grind higher. I suspect we'll get up to the 2935-2940 area by the close where that falling light green trendline is at currently. I doubt if I will short it though as I think the 4 hour chart will need more time to get overbought, like into Friday at least.

So while the 2 hour and 60 minute chart might rollover before then the 4 hour won't and therefore you'll have mixed charts, some pointing up and some down. That tells me there "should" be limited downside and probably limited upside too. It makes the most sense from a point of view that all the bears are going to short that hit of the falling trendline, and you can't have them making any money.

My hunch is that the bulls will grind through that trendline by Friday but the weekly chart is still putting a lot of bearish pressure on the market so I'm not expecting a move up to 3000 or even close. The prior high on 10/7 was 2959.00, so maybe a double top hit of that level would be my best guess by Friday. That's all for today. Have a blessed day.