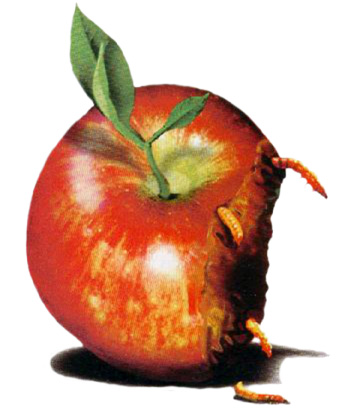 After Apple blew out earnings estimates on Tuesday evening, you would have expect a big rally on Wednesday.  But, it didn't happen, as this time the Apple was rotten.  Apple clearly is the leader in the Nasdaq, and carries more weight then all the other stocks in the tech sector.  But even with it's overnight jump of 15-20 points, the overall market didn't rally up huge like you would have expected it too.

Most people would have expected a 100-150 point Dow move up, with Apples' great news.  Since Apple carries so much weight in the market, this is clearly not a good sign for the Bulls.  Who is left to rally the market now, if Apple couldn't do it?

I'm really seeing more and more signs that this market is going to fall very soon.  I'm not going to stay that the "Top" is in, but the odds are much higher now.  Light volume is about all that can save this market from falling.  If they can keep the volume light tomorrow and Friday, then they could take out the current high with some fake jobs numbers.  That is something that they can easily fake, as earnings on all the various companies is a little tougher to alter. 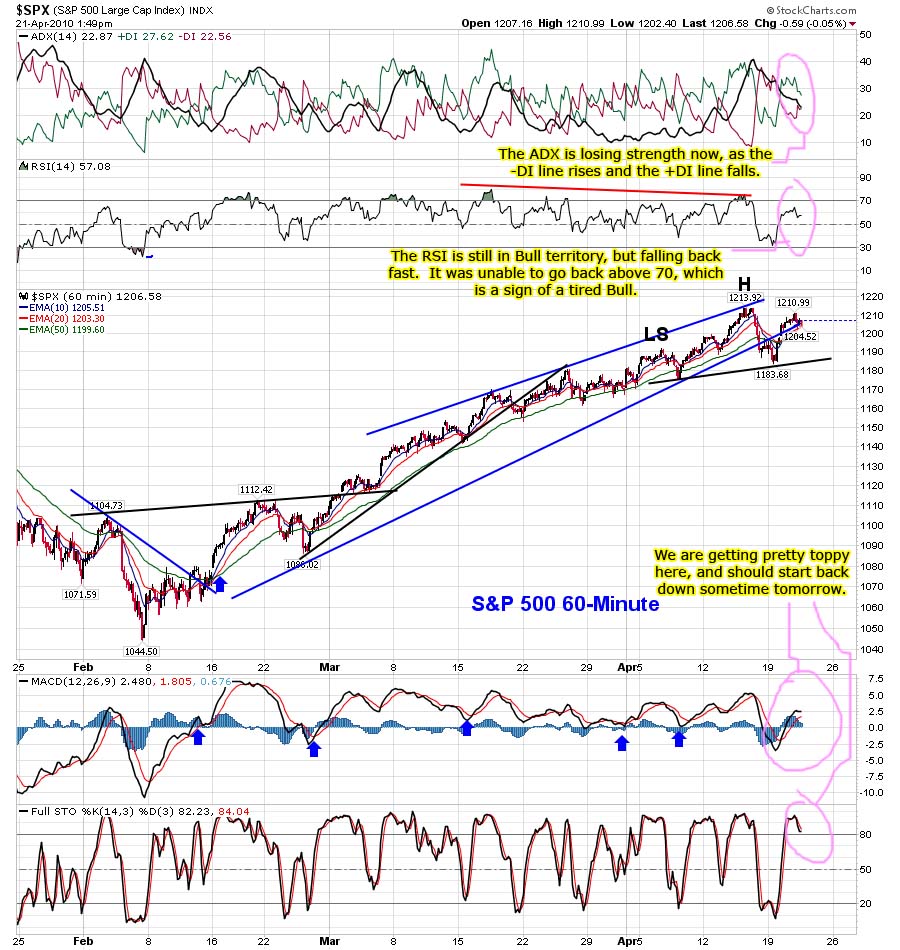 Looking at the 60 minute chart, it sure looks like it is ready to fall.  But light volume rules as the PPT can easily push up the market when there aren't any sellers to stop them.  This Goldman Sachs issue is about the only thing I can think of that could cause some serious selling.

Many people and large institutions are currently trying to get out of Goldman, as they don't want to take a chance on whatever outcome may happen from their fraud charges.  This will put constant downward pressure on any rally attempts that Goldman has.  However, I think someone is going to hit the panic button if the rest of the market starts selling off.

I don't know if it will happen this week or not, but you can just feel the tension in the market, as the tape struggled up some, down some, up less, and down more... all day today.  Just like animals can smell fear, I think the traders are now smelling fear.  I don't think it's going to be too many more days before the panic starts.

They will wait for the jobs tomorrow, and Microsoft's earnings after the bell Thursday.  If that data does show some real improvement in the economy, I think the serious selling will start asap.  We could have a Black Friday?  I don't know how good or bad earnings will be for Microsoft, but I can tell you that most people will say that "Vista Sucks", and Windows 7 is just Vista part 2.

And since Apple is their biggest competitor, who just blew out earnings, what's the odds Microsoft will blow them out bigger then Apple?  Remember, Apple couldn't rally the market today.  How is Microsoft going to rally the market... without any new gadgets like the iPad?  Is Windows 7 as big or bigger of a money maker then Apple's iPad?  I don't think so.

That leaves it up to the Jobs numbers to be outstanding, causing another rally.  Everywhere I read, more and more people are stating that they don't believe the numbers to be accurate as the government lies so much now.  Nobody believe anything they say or do now.  So, if the numbers are too good... will the market believe it?  NO, of course not.  And if the numbers are bad?  Just another reason to sell off and take some profits.

You put together the NO Win Situation with the release of the Jobs data tomorrow, along with the high odds that Microsoft fails to beat estimates enough to justify a continued rally, and throw in the Goldman Sachs issue... and I'd say the odds are very strong for a sell off to occur.

And since Technical Analysis doesn't seem to work too accurately by itself anymore, I'm leaning more heavily toward the "overall" feel of the market, and what news events are coming out first... then see if it matches up with the TA's.  Right now, they do match up.  The TA's have been showing overbought now for quite awhile.  We have just been waiting for the right news event to trigger it.  Will it be the jobs data and Microsoft?  I think it's the bears best shot.