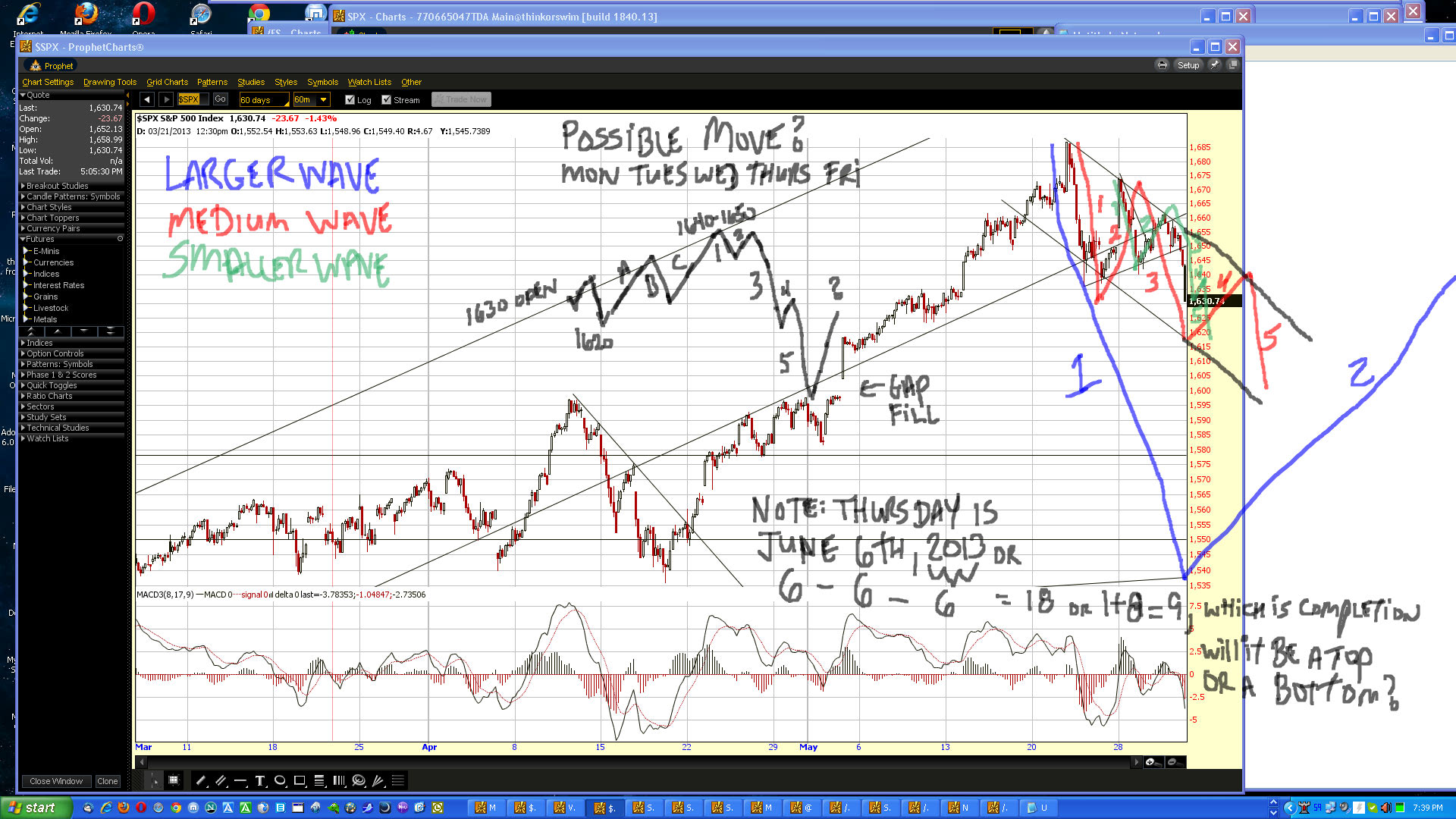 I know it has been long time since I last posted on the blog since nothing much And serious had happened. I recommended everyone not go short until late May Or early June.  Red and I both agreed on a possible top on May 22nd-23rd.  Now I am now going to explain whether it will be a major reversal or not.

In my previous posts I talked about the “law of vibration” and cycles and if you believe we humans are not exempt from the “natural law” you will absolutely believe that there is no randomness and imbalance in the behavior and emotions of the mass.  Every living thing in the universe vibrates, thus moving in a cyclic motion.  As a matter of fact cycles are progressional series where everything in nature combines in certain ratios (not only fibonacci numbers and golden ratios) to form a progressional series.

Actually, the ancients were truly aware of that as well.  You see, the Mayans conceived of time and human history as moving in cycles small and large  (It actually reflects the wheels within wheels).  In the modern world there is only a single calendar to keep track of our annual solar circuit, while in ancient times the Mayans used variety of calendars. One of the most significant calendars is called the “Long Count”... and was so peculiar as it had no start date!  The Mayan based their Long Count on what they referred to as “Birth of Venus”.  It was based on 104 -year “Venus-Round Cycle” ( two calendars of 52 years), which was really an important ceremonial event for them.  It was referred to as the point in time when all of their sacred calendars were realigned with the Cycle of Venus.

Now before I go on to explain more about the Mayan sacred calendars and such I would Like to touch on the brilliant work of Nikola Tesla who is the greatest genius of 20th century...  not Einstein but Tesla!  He studied Electromagnetic's and Electrophysics.  Using Egyptian secrets and numerology he created free energy ( it was suppressed by the Illuminati), and also invented a flying saucer which could fly around based on its own energy.  Actually many of his ground-breaking inventions were never released to the public and later he was called a “mad scientist”.

Anyway, historically he is known to have repeatedly said:  If only the world knew the magnificence 3,6 and 9.   He was truly obsessed with the groups of 3s, 6s being second and 9s being third.  Only a few people can understand that he was actually referring to the “secrets of Egyptians” and I have somehow learned and found out that Tesla’s 3s, 6s and 9s nearly include everything in the nature.  He also said that... and I quote: “Electricity came to me in a vision whilst I was looking at the sun.  I saw four winding's wrapped around spaced at 90 degrees to each other”.

If you examine the cycles in charts you will discover that the length of the cycle varies a little, which is due to some natural phenomenon.  The one in 2013 peaked in late May and we are about to see the consequences of it soon.  But you should not expect a very large decline at first.  First, the current uptrend is going to become weaker and weaker... then in late July or early August we must crash!  Therefore in August and September you should totally be short.

Now if you we use 13 as the root of the Mayan calendar system we find the following number sequence: 13, 26, 39, 52, 65, 78, 91, 104 .  If you notice, this number sequence is an octave consisting of eight tones and seven intervals.  The truth of the matter is that we have seven “overtones” which have arisen from the “fundamental tone”.  With that said, each number in the sequence can also be an octave.  I have already explained that if you consider a circle as a unity of 52-year round cycle each of it's 90 degree-quadrants now belongs to the 13-year cycle.  The 2/3rd's of the cycle which is perfectly “the major sixth” (in diatonic scale) is located at 60 degrees... 13*2/3 (0.667)=8.6 years.

Every cycle has their own building blocks and the 8.6-year cycle is one of the building blocks of the 13-year cycle in the stock market, (as rediscovered by Martin H. Armstrong).  He is someone who could read the cycles better than Illuminati  He made money when they lost money in the market, and soon they were mad at him and had him put in prison for seven years for manipulating the financial markets.  He uses the pi (3.14) cycles.

To his amazement he discovered that there are 3141 days within the 8.6-year cycle.  Google his economic confidence model, but you will find out that the amount of information on his work is really limited.  If you break the 8.6-year cycle into smaller cycles you will then have four 2.15-year cycles.  You might want to examine these cycles back in time... particularly from the year 2000 on.  Again, the length of the cycles varies a little.

To sum up... due to Venus 13-year cycle the market is going to be weaker and weaker until the energy of the current uptrend is completely drained.  Then we will see a series of panic declines.  So the period between now and early August should raise caution.

Please feel free to get in touch with me with your comments.

May you profit handsomely, Ali

P.S. Finanial markets grow both in time and price, and I have only talked about the timing aspect of the market in the article.

Great update from Ali, and now back to the short term for the market...

Last week I was expecting some type of wave up (a wave 5) to break the triangle but the market was too weak and it never happen.  Hopefully most of you were already short and held through the rally's up and down.  I would have loved to have seen that wave up to get short again at but missed it.  Such is life I guess?  So now we have a falling channel going on and from the looks of things I'm going to speculate that the next big move down day will be this coming Thursday, June 6th.  Looking at the charts I see prior support in the current 1630 spx area from back on the 8th, 9th, 10th, and 13th of May.  And since we are quite oversold on the short term I'm thinking that we'll dip down lower Monday morning and then chop back up a little throughout the rest of the day... basically going nowhere.

In fact, Monday should close down slightly or up slightly but nothing big either way.  Then Tuesday and Wednesday I'm expecting more of the same to happen, but by the close on Wednesday I think we'll hit the top trendline on the falling channel.  It should be around 1640 spx area by then I believe and by the time it hits it I think the short term charts will become overbought again and allow for another big down day to happen on Thursday with the target being the break of 1600 to fill the gap at 1597 spx.  So an intraday low as deep as 1580 is possible (don't expect it though) but they should recapture the 1600 level by the end of the day I suspect.

Then we should bounce back up nicely on Friday I think and probably into Monday the 10th, with Tuesday the 11th likely ending the bounce.  Remember, I think we are going down to retest that 1536 prior low and I think we'll hit it by Friday the 14th at the latest.  The old rule of thumb is that "they" (the market makers... aka gangsters) usually put in the low the Thursday or Friday the week prior to the monthly option expiration, which is June 21st... meaning either Thursday the 13th or Friday the 14th should be the low for this whole move down from the May 22nd high.  I can count the wave better now and I think this is what we have coming... 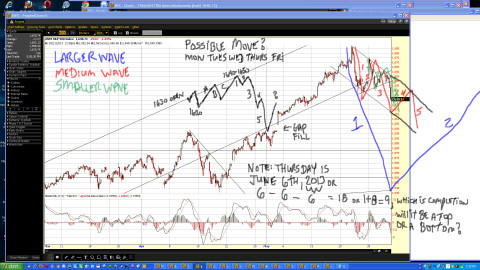 Then we should have a smaller wave 4 up (inside the medium wave 3 down) on Tuesday and Wednesday which I think will hit the top trendline of the channel in the 1640-1650 area.  Hard to say right now as the trendline will go lower every day, but 1640-1650 is the estimated zone that the smaller wave 4 up should hit that trendline and stop.  This leaves the smaller wave 5 down inside the medium wave 3 down still left to go, and that's the wave I think will hit the 1600 area and end at.  Then we should start the medium wave 4 up into Friday the 7th and Monday the 10th.  It's likely going to be an ABC wave up so it could rally on Friday for the A wave up and down on Monday for the B wave down, with a final C wave up to happen on Tuesday the 11th... which would end the medium wave 4 up.

Next would be the medium wave 5 down that should last the rest of the week and take us to the 1536 area by Friday the 14th to put in the low for the larger wave 1 down from the May 22nd high at 1687 spx.  After that we'll probably have a lot of chop the rest of June and into July for the larger wave 2 up.  This means that late July and early August we could be seeing a larger wave 3 down start like Ali is talking about in his update post above.  Catching the smaller wave 3 down, inside the medium wave 3 down, inside the larger wave 3 down will be a bears dream!  I'll do my best to try to figure it out but do keep in mind that I get the counts wrong sometimes (like last week with that wave 5 up not happening), so always use your own judgement.

Ok, that's about all I can think of now so I'll see you all on the blog in the comment section...

P.S.  Here's a nice read from another blog that covers some of Martin Armstrong's predictions...

Martin Armstrong is undoubtedly one of the greatest cycle theorists of our day. His predictions include the 1989 peak in the Nikkei market to the day, as well as the 1987 crash and 2007 top in the U.S. markets. Armstrong's most famous cycle is 8.6 years, or pi*1000 days (3141 days). In Armstrong's article The Business Cycle and the Future (1999), he states:

I began with the very basic naive approach of simply adding up all the financial panics between 1683 and 1907 and dividing 224 years by the number of panics being 26 yielding 8.6 years. Well, this didn’t seem to be very valid at first, but it did allow for a greater amount of data to be tested compared to merely 3 waves described by Kondratieff.

...The issue of intensity seemed to revolve around periods of 51.6 years, which was in reality a group of 6 individual business cycles of 8.6 years in length.

In Armstrong's article, he further subdivides the 8.6 year cycle into four 2.15 year intervals, and lists several dates going into the future. Let's find out what is going on with the planets on these dates. 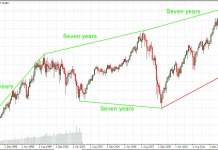 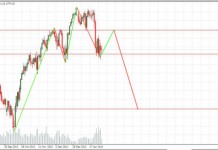