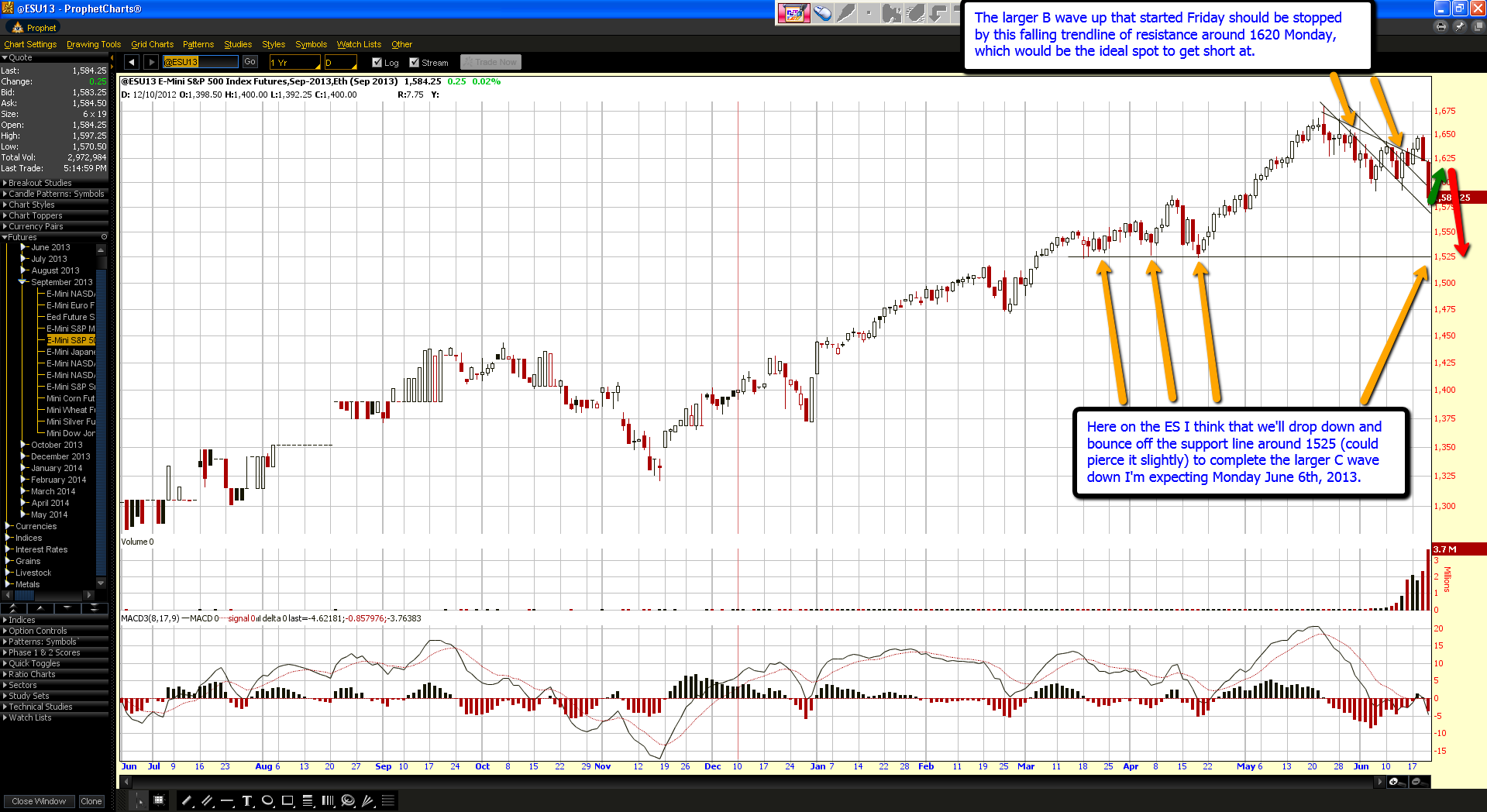 Not exactly a "mini-crash" on Monday but still a nasty down day before bottoming...

One More Big Move Down Before A Short Term Bottom...

Last week was one hell of a ride for the bears that got short by 2:30 pm Wednesday as Bernanke said nothing about giving the bulls more crack when the FOMC minutes were released.  In fact he spoke more about taking some of their crack back from them, which needless to say... didn't make them very happy!  I personally missed the whole move down as I was too busy with some other projects I'm currently working on right now.  But hopefully some of you were short and benefited from Bernanke's gift to the bears.  It was one of those moves that if you didn't get short ahead of time you would have missed the whole thing as they didn't give the bears any decent bounces to get short at.

It's funny how worthless elliottwave is when a big move like this happens.  The whole move down looked like one large wave 3 instead of a 5 wave pattern.  You can go back now and see some very small bounces in it and count out the entire wave pattern but when it was happening you would have likely missed them.  So now it appears that we have bottomed for the short term and will likely be given one shot to get a short position from the expected early morning bounce this Monday.

So those of us that missed the first big move will get one more chance for the next big move down... which I think will happen all on Monday!  If the first move from the 1654 high to the 1577 low wave a large wave A then Friday and Monday mornings bounce should be the larger B wave up.  This should end by midday Monday and start rolling over in the afternoon session, which should scare every last bull to death when it takes out the 1577 low on the accelerated larger wave C down, which I believe will go hit 1536 pretty quickly.  In fact with the momentum it's likely to gather I think it will take that prior low out and head toward the 200 day moving average around 1506 SPX.

Will it happen like that?  Hard too say obviously but the charts would certain support an ABC pattern playing out here.  The question is simply how high will the larger wave B go up to and how long will it take for the larger wave C down take before it ends?  The larger A wave down from the 1654 high to the 1577 low really happened in only 2 days and the larger B wave up started on Friday and could easily end sometime on Monday... making it only 2 days in duration.  So can a larger C wave down happen in just one day?  It certainly could I believe but naturally I can't guarantee you that we are going to have this mini-crash all on Monday and then end the larger C wave down.  I'm only pointing out the possibility for this to happen all in one day is real.

Just be that this is not me calling for a crash on Monday but presenting some interesting facts that say it "could" happen.  I'll simply be looking for that larger B wave up to end at some point in the first half of the day on Monday to get short at.  If the market then rolls over for the start of the larger C wave down then it could take 2 days, 3 days or longer to end since the A wave and B wave took 2 days.  But considering that any C wave is generally a "capitulation" wave where traders panic while getting hit with margin calls the possibility is real that it could all happen in just one day... and the best day would be Monday due to it's Satanic nature.  We all know the people that control the market love their rituals and this is a perfect time to make a mini-crash happen in my opinion.

Regardless if this happens all in one day or not we should all just be focusing on finding the top of this larger B wave up so we can short it in front of the larger C wave down that will follow.  If it takes 1 day or 1 week to end the C wave it shouldn't really matter as the goal is to just be on board for the ride.  Looking at the charts we all see that big gap at 1628.93 to 1622.54 SPX that stands out like an obvious target.  While it's common to fill gaps it's not common to expect it to happen this soon.  Maybe they only go to gap window at 1622.54 and don't make gap fill at 1628.93 until weeks from now after we first bottom below 1536 and rally back up in the first few weeks in July.

Looking at the charts I can draw a trendline from the 5/30 high of 1661.90, connect it to the 6/10 high at 1647.72 and it will point toward about 1625 area (and falling of course) on Monday.  This means that it could fall to the 1622 gap window level by early Monday, and should stop the bulls on the first hit.  This implies that gap fill won't likely happen and the best the bulls can hope for is gap window.   From a Fibonacci level we have a 50% retracement at 1616 and a 38.2% at 1606 SPX.  The 1606 level seems a little bit too shallow if they want to really trick the bulls and get the largest percentage of them trapped before a nasty C crash wave down.  Plus you need to get the bears out of their short positions for the C wave down to really gain momentum.  Therefore I'd think the 1616-1622 area will be the best spot to get the most bulls long and the most bears out.

The only major concern here is that I could be focusing on the wrong idea... meaning that there is probably more bulls trapped long then bears to squeeze.  That means the lower target of 1606 for the 38.2% Fibonacci level might be all we get?  The overnight futures Sunday night and Monday morning should give us a clue I think.  I'd like to see a strong gap up open to get the rally going strong so we can hit the higher target range of 1616 (the 50% Fib. level) to 1622 the gap window and trendline of resistance level.  I'd love to short from that zone as opposed to only 1606 but the market will give us whatever we are allowed I guess.

We should also watch the VXX closely for clues and when it gets close to it's gap window of 20.91 we should be topping on the SPX at the same time.  Maybe it even goes and fills it's gap at 20.12 and the SPX only hits gap window but we should watch it closely for clues.  Then the ES also has an important trendline to watch, which comes in around 1620 (and falling of course) that would probably match up with the 1622 gap window on the SPX.  This is the ideal place to short the market on Monday should it rally up that high?  We may only get the 38.2% level around 1606 but I'm leaning toward the 1622 zone. 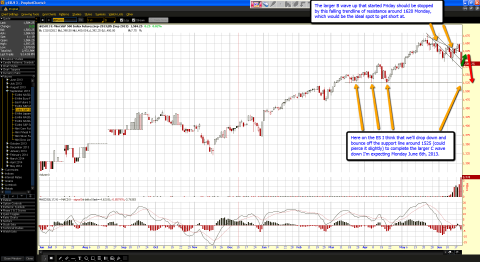 Regardless of if this happens all on Monday or not the odds of getting through the 1620 area "downward sloping resistance" line on the ES on the first hit is very low.  That's about 1622 on the SPX which is around gap window and also the lower rising trendline from the broken channel the market fell out of last week.  When you have 2 trendlines meeting around the same spot along with a gap window level you have triple resistance there.  You also have the 50 day moving average around 1618 and the 50% Fibonacci level at 1616 to deal with too.  All of those factors tell me that the zone of 1616 to 1622 is going to be very, very hard to breakthrough on the first hit. 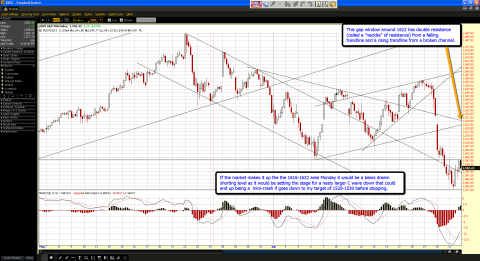 After the market finishes this C wave down I expect 2-3 weeks of choppy up and down action into late July before topping for a final "lower high" then the 1687 top on May 22nd, 2013.  From that area I'll be looking for the next crash wave down that should make August one very ugly month for the bulls and a feast for the bears.  I'm expecting the 1420-1440 area to be the downside target for that huge sell off.  Then we should rally the rest of the year if all goes as planned.